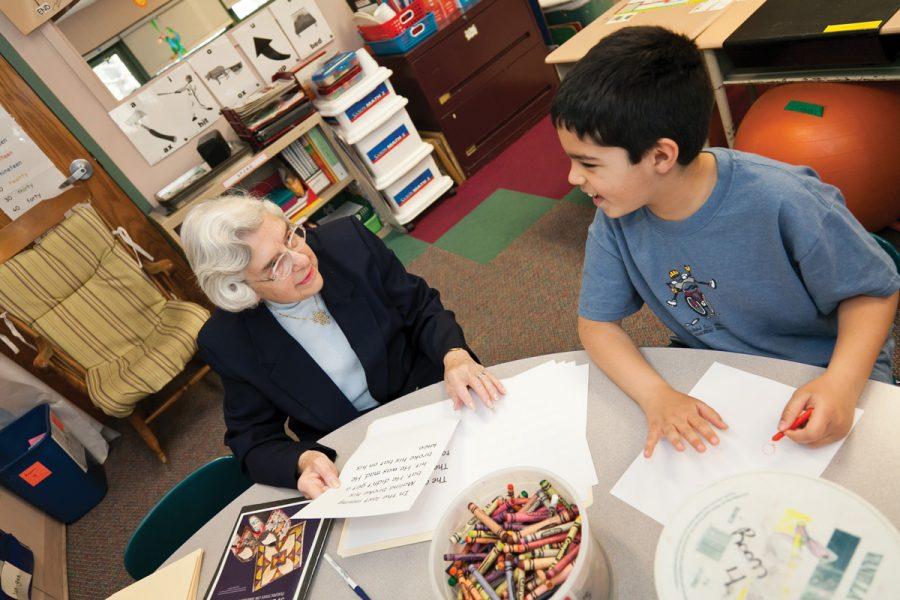 Dorothy Meyerson works with a student at the Miriam School and Learning Center in March. Photos: Lisa Mandel

As someone who taught Flynn Park Elementary School’s youngest students for nearly two decades, Dorothy Meyerson is quick with a joke about her lengthy tenure.

“It took me a long time to get out of kindergarten,” she laughed.

Even today at age 86, the Temple Israel congregant still hasn’t quite gotten out of school. She volunteers her time one day a week at the Miriam School and Learning Center, an institution that specializes in educating children with learning disabilities.

“She is my inspiration,” said Candi Chiburis, a special educator at the school. “She’s outgoing, friendly. She’s funny and so knowledgeable. She’s been a mentor to me. She’s been like a grandma to the kids.”

Meyerson helps Chiburis by assisting the children in assembling books they’ve written. Meyerson said that usually the topics include favorite pets or interesting trips the kids have taken though, sometimes, more complex topics pop up.

“This year one kid wrote about the Constitution and I was just floored,” said Meyerson. “They had talked about it in class. He’s really blossomed.”

That’s exactly what Meyerson loves to see and why she’s pursued the challenging field of shaping young minds ever since being hired to teach second grade for a year in the Ritenour District. Later, the native St. Louisan would work at a Farmingdale, N.Y. school before returning to Missouri where she began volunteering at Flynn Park in the University City School District.

It wasn’t long before her efforts were noticed.

“One day, the principal said the kindergarten teacher was leaving,” recalled Meyerson. “Did I want the job?

“That was my interview,” she chuckled.

The short interview resulted in a long placement. She’d spend the next 18 years working with kindergarteners. The U. City District even named her teacher of the year in 1989-90. She’s also taught Sunday School at Temple Israel for about 20 years.

However, after retirement, she still wanted to stay involved. That’s when she began giving her time at Miriam.

“She’s here today. She came even though it was storming,” said Joan Holland, Miriam’s head of school. “Her commitment to working with our kids is so sound and steady.”

Holland described Meyerson as dependable, patient and knowledgeable as well as always warm to the children and staff alike. She’s also a constant presence at fundraising events. She’s even helped the school with other projects like assembling the directory.

“She’s a gift to us,” said Holland. “We’re just so lucky to have somebody here who cares so much.”

Chiburis concurs, noting how important she is to the students.

“What an amazing woman she is and how much she gives back not just to the Miriam community but to the St. Louis community as a whole” said Chiburis. “She’s just a great, great lady.”

But for Meyerson, being an Unsung Hero isn’t hard work at all. She enjoys her time with the kids just as she likes engaging in her other volunteer work. She gives a day each week at the Missouri History Museum, something she started doing with an exhibit on the World’s Fair. She’s also a part of the 1904 World’s Fair Society.

“They needed people to guide visitors. I volunteered for that and I’ve stayed on,” she said. “Some of the exhibits at the museum are just so interesting. I love telling people about them.”

She also loves the museum’s work in promoting the city’s recent 250th anniversary.

“That was just fascinating,” she said. “I think it is wonderful that we have a place like that where there is the history of St. Louis because it has a lot of history in it.”

Yet her main love continues to be the future rather than the past, something that only working with children allows a person to do.

“What’s interesting is that I still see some of the kids who live in St. Louis,” she said. “It is wonderful to see what they’ve done as they’ve grown up.”

She said she was stunned to hear that someone wanted to recognize her efforts with an Unsung Hero Award. She was just doing what came naturally, helping children to secure a better tomorrow.

“When [the Light] called, I said, ‘Oh, my gosh, I’m speechless,’” she remembered. “And that doesn’t happen very often to me. I feel very honored.”`