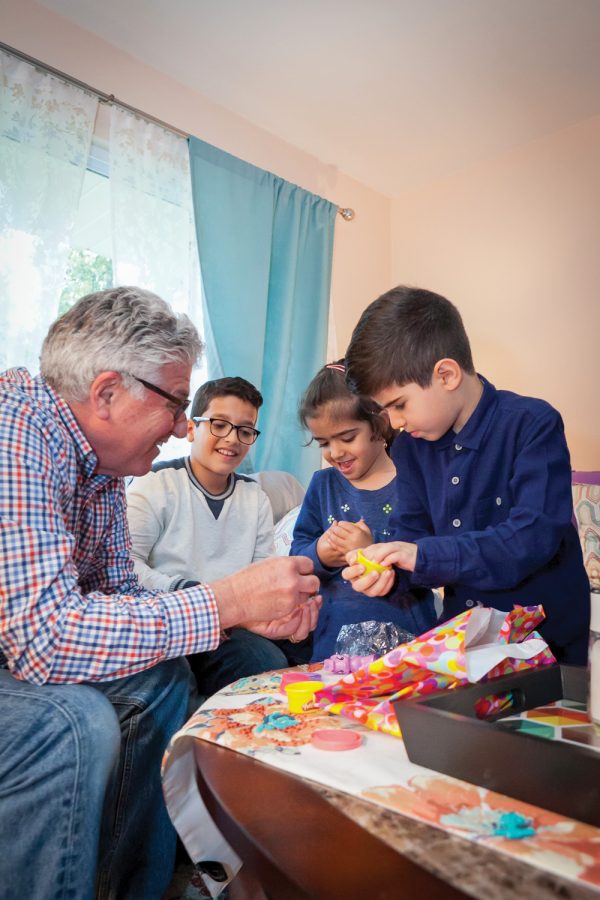 Stan Shanker visits with the family of recent immigrants Ali and Israa: Ahmed,  Jana and Hasan at their home. Photo: Lisa Mandel

Stan Shanker can barely knock on the front door before he’s greeted with excited yelps of “Uncle Stan! Uncle Stan!”

They come from the four children of recent immigrants Ali and Israa, who range in age from 11 to 3. The older ones like to high-five and fist bump Shanker, while the younger ones prefer to crawl into Uncle Stan’s lap.

“The children are very affectionate, but I am cognizant not to touch them or pick them up without their parents’  permission,” says Shanker, who last year started serving as a home visitor volunteer with the International Institute of St. Louis, welcoming new Americans here.

“Life in a new country can be very overwhelming to these refugee and immigrant families, so I want them to feel as if they have a friend in me and a friendly face to help them.”

Those who have seen Shanker in action will tell you he is a lot more to these families than a friendly face, though they don’t discount the importance of that.

“Stan has been a relentless advocate for the refugees he works with and a tenacious pursuer of concrete help for them,” says Debra Smith, volunteer coordinator for client services at the Institute. “Whenever possible, he has provided concrete help — working with other agencies to provide furniture, teaching people to ride the bus, practicing English — in ways he probably never imagined when he first started volunteering at the International Institute.

“People who want to work with refugees tend to be amazing, so Stan is representative of the volunteers we have here. But he really goes above and beyond. He is just outstanding in his passion for this work and his commitment.”

As a home visitor, Shanker’s job is to visit refugee families once a week during the first month they arrive in St. Louis. On these visits he checks to make sure the places these families are renting are habitable, but he’s also there to answer any questions they have and get them acclimated to their new country.

“Some of the places they live are unbelievably terrible,” he says. “There’s no hot water, the pilot lights don’t work on the stove, windows are broken, doors are falling off their hinges.

“We are there to look at these things and go back to the institute to tell them what we found. They in turn speak to the landlord to get them to remedy the problems.”

Shanker estimates he has visited 20 to 30 families who have come from countries such as Iran, Iraq, Syria, Afghanistan, Sudan and Eritrea, since he began doing this work. About half of these families speak some English; of that group, he says, about 20 percent speak well enough to carry on a conversation. The other 50 percent come here knowing no English at all.

“The first thing I do on my initial visit is give them my cellphone as well as 911 in case of emergency, explaining that the call is free,” Shanker says. “When I began doing this, many didn’t have a cellphone or any phone at all. Of late, it seems most have a cellphone.”

Shanker’s interest in volunteering with new immigrants  came soon after he heard a sermon given at his temple by Shaare Emeth Rabbi James Bennett during the High Holidays in 2015. It centered on the plight of Syrian refugees.

“That gave me permission to voice opposition to what was going on and see what I could do to help,” Shanker recalls.

He then met with Shaare Emeth Rabbi Andrea Goldstein to see whether the congregation could sponsor one or two Syrians families and bring them to St. Louis. After making several calls and doing some research, he learned that neither religious institutions nor individuals could sponsor refugees or immigrants; that has to be done through the U.S. State Department and other authorized agencies.

A few months later, a representative from one of those authorized agencies, the International Institute of St. Louis, came to Shaare Emeth on a Friday night asking for help from faith-based organizations with refugees coming to St. Louis.

“I immediately called the Institute and told them I wanted to get involved,” says Shanker, who like all volunteers had to undergo a background check.

In addition to the home visits, Shanker enlisted the help of volunteers at Shaare Emeth — today the number is over 60 —  to get involved with the immigrants as well as help sponsor various events for them, such as pot luck lunches, three days of Christmas carnivals and a free day at the Magic House for 110 refugee children and their parents.

This summer, Shaare Emeth will be one of several local synagogues participating in a new initiative begun by the Jewish Coalition of New Americans. This recently formed committee, under the umbrella of the Jewish Community Relations Council, will provide a morning day camp for the children of refugees while their mothers are in English classes at the institute.

“Stan personally speaks to anyone in the congregation who is interested in becoming involved with this effort,” says Debbie Bram, director of Jewish life and learning at Shaare Emeth. “There is no limit to his devotion and the time he gives. He took an issue, a need, and turned it into a reality with feet on the ground doing important work to help these new Americans. His passion has been infectious as evidenced by so many people in our congregation getting involved. Consequently, we now have a subcommittee that works on this project.”

As to why Shanker is so committed to this particular group of people, he says that something about their plight “really tugs at my heart.”

“Maybe it has to do with my own grandparents who sought refuge in this country so many years ago,” he says. “These people come here alone, knowing no one, with no home or job, and often not speaking the language. They are just so appreciative for the help. Without exception, every family I have met has been unbelievably grateful for being in the United States. In my eyes, they are the real heroes.”

Still, he worries. He has never been one to lay awake, but he has spent many a sleepless night of late mulling over the possible consequences of President Donald Trump’s attempts to impose an immigration ban.

“I would say I am on the phone, if not daily than certainly weekly, voicing opinions to U.S. senators and representatives about some subject having to do with immigration,” he says. “I am really, really concerned.”