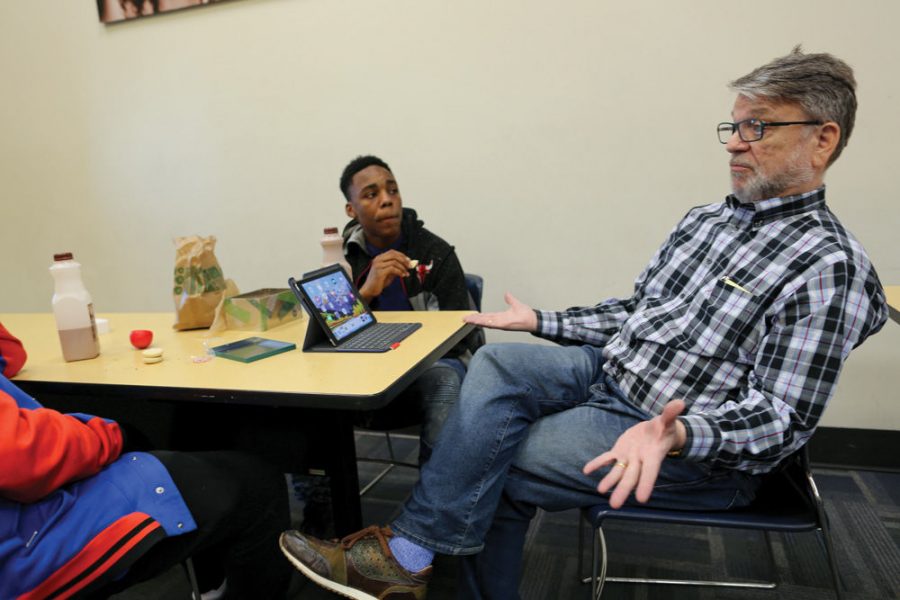 Robert “Bob” Stein still remembers his first home visit to an immigrant family while volunteering for the International Institute.

“I walk into the home and it was very hot,” said the 66-year-old. “The air conditioning was working but not that well. I noticed that there were ceiling fans in the living room. They’d never seen a ceiling fan. I switched it on and these four children were watching every blade move around in a circle.”

Getting to America can be a challenge but getting acclimated to America can sometimes be just as difficult. From the difference between Fahrenheit and Celsius to what natural gas smells like to how to work a ceiling fan, a new country can hold all sorts of new experiences for recent arrivals. That’s why people like Stein are important. By giving his time to visit the residences of immigrants, he can help ensure they know the ins and outs of their adopted land.

Sometimes the needs are simple, just a quick check to make sure things are safe or a visit to the grocery store. Other times things can be more complex. Still, even complex problems can have simple answers. One of Stein’s visits found a mother suffering from malaria. Symptom relief just meant filling a prescription for Tylenol but the family had no money or way to acquire a dose. Stein went and bought a bottle of the pain reliever.

“To this day, every time they see me, I’m like the great doctor,” he said, smiling.

But Stein’s work isn’t just important to immigrants. It helps the organization itself to function.

“Without him, we wouldn’t have the staff to do the job,” said Debra Smith, volunteer coordinator for the institute.

Smith describes Stein as generous, flexible and anxious to help however he can whether he is doing home visits or acting as a lobby greeter for the agency.

“Having a friendly face and someone who understands our system to greet refugees and other immigrants when they arrive makes a huge difference in terms of people feeling welcome (and) getting the help they need efficiently,” she said.

But, as a longtime trader in the metals business, Stein hasn’t just met arrivals from other lands. He’s also been to those lands as a veteran world traveler. It is a perspective he works hard to bring to his other volunteering passion at Herbert Hoover Boys & Girls Club where he talks with young people.

“I try to impart to them that there are all of these different types of people around the world,” he said. “In their lives, as transparency increases through the internet, their relationships with people from those places are going to be far greater in number and more intense than mine ever were at their age.”

He even brings guests in to talk about what it is like in India or China.

“We also talk a lot about civility and social responsibility,” he said. “They’re good kids. I enjoy doing that. We have a nice relationship. It is a very open conversation.”

Jamal Bailey, a former volunteer coordinator with the club, describes Stein as one of the most amazing people he’s ever met, an innovative, compassionate and understanding man with a pure heart.

“He exposed them to different cultures through a lot of the places he traveled,” said Bailey, who noted that such experiences help youth to see new opportunities and possible careers. “A lot of times kids only see their environment. They don’t see that the world is such a big place.”

Volunteerism has long been a fact of life for Stein. The Vancouver, Canada native began giving his time while living in New York City where he became a Big Brother mentor.

“That little brother of mine is now one of my dearest friends,” Stein said. “He’s 55 years old.”

His efforts to help others continued in St. Louis. Now two years into retirement, he still loves to wear a lot of different hats.

“I think I have a responsibility to do it,” he said. “I think that we all do — especially with those who need a little bit of guidance, a little bit of help establishing themselves. There are so many opportunities out there and I think each of us has the obligation to do that in whatever form we have the capability to do so.”

Sometimes, even a simple trip to the airport can yield a chance to help others.

“I was in and out of that airport so often,” remembered Stein. “I’d see a lineup of young people who were either in the process of going to training camp or traveling within the military system.”

Soon enough, he was volunteering with the USO, despite having no previous connection to the military. He said that those soldiers reminded him of his own children.

“I thought it was a place where I could just simply be of assistance to people who were kids who were away from home,” he said. “A lot of these kids have never been on an airplane before.”

A congregant of Shaare Emeth, Stein sits on the board of the local American Jewish Committee and the Jewish Fund for Human Needs committee at the Jewish Community Relations Council.

Stan Shanker, a 2017 Unsung Hero who admits he’s known Stein “for more years than I’d like to recall probably,” said his friend has only become more active since leaving the work world.

“Rather than simply retire and not have a plan, he really gave it some thought,” he said. “He’s all in. When he does something, he really embraces it and is an active participant.”

Likewise, Joan Silber, who has worked with Stein in relation to the AJC and Boys and Girls Club, calls him an intelligent, energetic and dedicated volunteer who asks questions about how to be more effective.

“He sets goals and does the investigative work to find out what are good matches for him and does it to the nth degree,” Silber said. “He goes beyond what is required by seeking out ways to be even more productive and have greater impact.”

For Stein, who credits his parents’ volunteering spirit for his own attitude, it is all about making a difference for others.

“You’ve had this impact that’s so simple it doesn’t feel like a big deal but to them it is important,” he said.