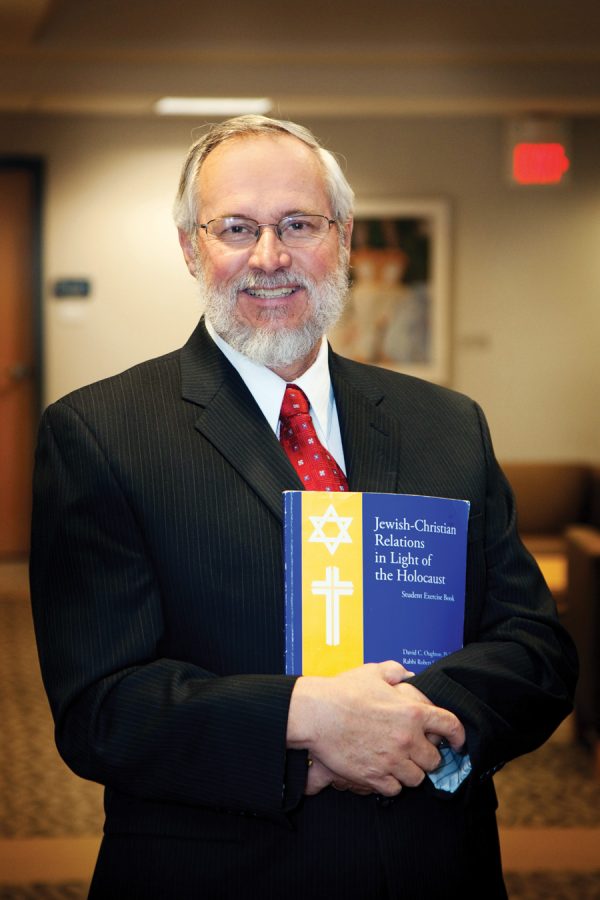 BY PATRICIA CORRIGAN, Special to the Light

In 1972, when David Oughton was in college, he traveled to Europe and went to Dachau. “Going there grabbed me emotionally, and that visit changed my life,” says Oughton.

“Since then, I have tried to learn as much as I can about the Holocaust, what happened, why it happened, what are the  lessons and what would it take to prevent future genocides.”

Oughton, a Christian, has shared what he has learned. In the past 35 years, Oughton has taught over 400 courses in theology, philosophy, the world’s religions, peace studies, and Holocaust studies at various schools in the metropolitan St. Louis area. He also has made more than a hundred presentations on religious and philosophical topics at churches, synagogues, temples, community centers and professional conferences.

In 2006, along with Rabbi Robert Sternberg, Oughton co-authored “Jewish-Christian Relations in Light of the Holocaust,” a student text and teacher’s manual. A participant in the U.S. Holocaust Memorial Museum Mandel Fellows Program, he has studied at Yad Vashem in Jerusalem.

Oughton also has served as chair of the Education Committee at the St. Louis Holocaust Museum and Learning Center and helped design the museum’s curriculum for educational workshops. “David is not Jewish — he is what we consider one of our righteous friends,” says Jean Cavender, director of the Holocaust Museum and Learning Center. “He has been one of the leading voices in our St. Louis community to advocate for better Holocaust education in the parochial school system.”

Cavender continues: “David is a quiet, soft-spoken man who has a powerful intellectual side.  When he lectures on any given topic he is clear, concise and enlightening. More importantly, he is deeply dedicated to the success of our mission and continues to stay involved on our Council and Education Committee.  We have a great friend in David Oughton.”

Cavender points out that Oughton teaches the history of anti-Semitism from 33 CE to 1933, the year Hitler came to power, tracing commentary in the Gospels that show the shift in responsibility for the death of Jesus from the Romans to the Jews. “In my classes, we see anti-Judaism in early Christianity as the seed bed for the Nazi’s racial anti-Semitism,” says Oughton.

“We look at Jewish and Christian relationships before and during key historical events, but we also look at Gentile rescuers of Jews during the Holocaust and at how the Catholic church and other Christian churches changed their teachings afterward.”

Oughton reports that discussions in his classes range widely, covering historical and religious issues and, in a broader context, what it would take to eliminate war. A native of Belleville, Oughton earned his Ph.D. in Philosophies and Theologies of Peace and Justice at St. Louis University.

“Even then, I wanted to consider ways in which the world community might be able to change political systems so that war would be outlawed and genocide made an international crime,” he says.

Some 25 years ago, Oughton founded the St. Louis Dialogue Group of the World’s Religions and Philosophies, which meets to discuss common questions and concerns. He attends conferences of the Parliament of World Religions and locally is a member of the Interfaith Partnership/Faith Beyond Walls.

“The majority of people in the world belong to one of about a dozen religions, and I find that learning about other religions is a very positive experience,” says Oughton. “There won’t be world peace ultimately unless there is peace among religions. But if we can learn about each other, learn to tolerate each other – maybe we can find political solutions to end war and genocide.”

Oughton believes that the world is moving slowly in the right direction, though often “taking two steps forward and one back.” He says, “One major positive movement is that many countries have agreed in principle that when civilians are being targeted for persecution, the international community has a responsibility to protect them.”

Oughton adds, “There are movements and organizations trying to move the world forward where a world law would be created so that people would be held responsible for participating in genocide. That certainly is one of the lessons of the Holocaust, and these signs of hope need to be promoted.”

This ambassador of world peace pauses and then adds, “It won’t happen overnight.