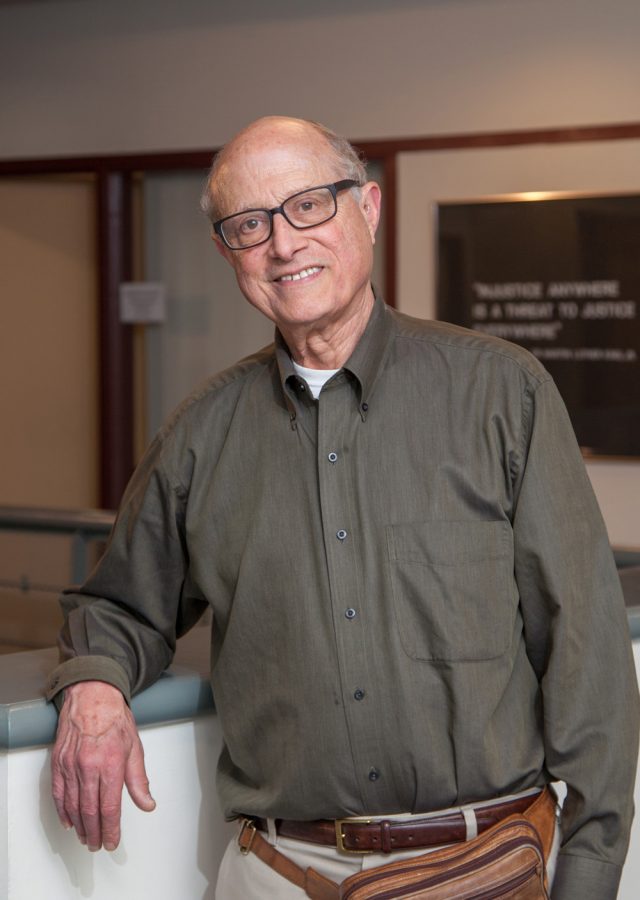 After he stopped working, David Lander felt he’d have more time for other pursuits. It turns out he was right.

“One of the things I wondered when I retired was, ‘Is there an upward limit on how many hours a day or a week someone could read?” Lander said.

Lander isn’t the sort to let limits stop him whether it is reading the most books or fighting for the underdog. It is why he helped found Jews United for Justice two decades ago.

“I don’t like when people are taken advantage of unfairly and they don’t necessarily have the support they might have to attack an injustice,” he said. “I feel a real responsibility to try and help.”

The group has been active since the late 1990s but, in the current political environment, issues of social justice have emerged with renewed energy and JUJ has been on the front lines of that dynamic. Lander said he’s excited by what it is doing right now.

Issues like police reform and predatory lending have bubbled to the forefront of the agenda.

“What they do generally is try to keep the radar out for important social, racial or economic injustices and then determine whether those are being attacked within the Jewish community or outside,” said Lander, who chairs the group. “If it looks like there is a need for some resources, we’ll try to get some people together and say that’s something we should counteract.”

But JUJ isn’t Lander’s only activity. A longtime bankruptcy attorney, he began his life in the law with Legal Services of Eastern Missouri first as a staff lawyer and later as director of the agency.

Now, nearly four decades afterward, his 2015 retirement from the prestigious Greensfelder law firm finds him with enough spare time to return to his old stomping grounds. Lander now volunteers about six to eight hours a week helping with projects at Legal Services’ housing and consumer units dealing with the issue of unlawful evictions.

He also chairs the Leadership Council of the Center for Excellence in Financial Counseling at the University of Missouri-St. Louis, which aims to assist those who provide guidance to individuals with money troubles. Further, his work has included founding the Employment Connection, a non-profit that helps ex-offenders to find employment, which has now celebrated its 40th year.

“We started that organization because at that time, the notion was that drug addicts, alcoholics and people just out of prison were having a very hard time getting jobs so we started the organization,” he said.

Unfortunately, dealing with former prisoners entailed a degree of risk. The organization’s checkbook was periodically stolen.

Still, even that negative experience provided a positive life lesson. Lander recalled the banker who brought the difficulty to the attention of staff but admirably didn’t cut ties with the group. He just suggested keeping the checks at the bank instead so they could be written on-site.

“Here’s a guy who said, ‘I really want to be supportive and I’ll give you some ideas for how to do it,’ ” recalled Lander.

Those who work with Lander at JUJ say he has long been not just the driving force but also the essential ingredient in the organization’s success.

“It is what they call in Latin ‘sine qua non,’ ” said Richard Gavatin, who handles communications for the group. “Without him, it would not have been.”

Gavatin said that Lander has a unique leadership quality that pulls everything together.

“What I really appreciate about him is that he has the combination of being very authoritative in a way but at the same time listening to all of the opinions of the other members of the board,” he noted.

“I think one of the unique things about David is that while he cares for the larger community, he demonstrates that in how he connects with an individual person showing love,” he said. “Overall, he is a man of deep integrity, of vision and is consistent in his views working toward a community that cares for all of its members.”

Whatever the cause, Lander said that volunteerism is vital, often acting as the lifeblood of a community organization.

“It is important for two reasons,” he said. “One is that there isn’t sufficient dollars to take care of things that need to be taken care of so we need volunteer dollars. Secondly, the staff and full-time workers have a tremendous amount of expertise and knowledge to bring but volunteers bring a different perspective.”

That perspective began early for Lander who found inspiration to get involved from United Hebrew Rabbi Jerome Grollman while growing up in University City. Lander found his family also played a strong role and his brother and sister developed a long history of connection to social justice issues.

But it was actually Lander’s children who helped inspire him further. He was impressed by seeing how committed they and their young peers were to making a difference.

“The power and the passion of social justice in the Jewish youth groups is an example of what I treasure,” said Lander, who is a member of both Central Reform Congregation and Congregation Shaare Emeth, where he said the rabbis exemplify dedication to racial, economic and social justice. “Synagogues try in different ways but that was a really important piece for me. After they grew up, my wife and I wanted to make sure that we carried on that same kind of notion.”