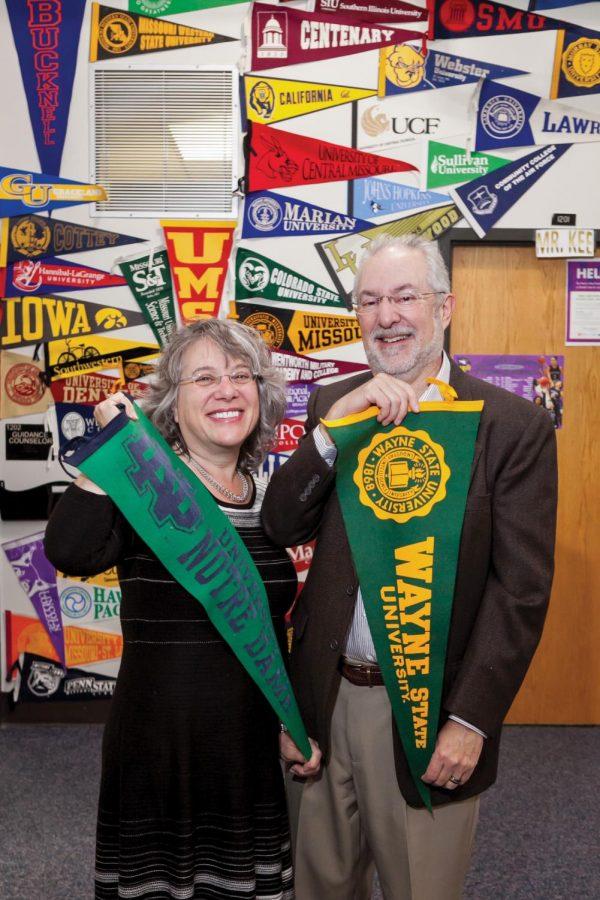 No longer technically “unsung,” Lois and Dave Zuckerman were honored April 24 with the Parkway School District’s Pillar of Parkway award “for providing extraordinary service to the Parkway community and beyond.” Still, the couple will be hailed this month as Unsung Heroes, an award from the Jewish Light that celebrates outstanding volunteer work.

The Zuckermans are the founders of Mentors4College, a volunteer, not-for-profit organization that helps students and their parents settle on and finalize details for a post-secondary education path. That path may be a four-year college, two-year college, a trade or technical school, the military or a course leading to certification in a chosen field.

The couple launched the program in 2011 at Parkway North High School, which all three of their children had attended. Since then, the Zuckermans and about 30 trained volunteer mentors have worked for free with almost 400 students at Parkway North, Parkway Central and Parkway West. Now the program is expanding to the Bayless School District and to a school in Washington, Mo. (For details, visit their website: mentors4college.org)

“The volunteers are the heroes — this honor goes to them,” Lois said.

Dave, who said that Mentors4College is a part-time job for the couple, added, “We have a ball doing this.”

They are members of Shir Hadash Reconstructionist Community where, in July, Dave will assume the duties of president.

So what was the genesis for Mentors4College?

“Partly working with our own children and partly a young man who was in school with our youngest,” Lois said. “He is an amazing young man but without much guidance. He went to a community college, got bored and dropped out.”

Dave said, “He needed an education that challenged him, rather than one where he didn’t fit. That’s the value of our program — finding the ideal situation for every kid. Some need an Ivy League school, some are challenged at junior college and others need somewhere in between. Take our own kids. We had one at Brandeis, one at Yale and one decided not to go college – and he was right.”

Jenny Marquart, the soon-to-be retired principal at Parkway North and a board member of Mentors4College, praised the couple’s efforts.

“The Zuckermans have always been incredibly supportive parents, pushing us and working with us to make sure everybody in our school was excelling, even before they founded Mentors4College,” Marquart said.

“What is most admirable about them is their interest in helping people within the school community even when they have no stake in it, long after their children have graduated. That’s amazing.”

Marquart called the couple “wonderful resources” for students and their parents.

“They go to college counseling conferences, they reach out to schools and they stay connected to the search and selection process as much as possible,” she said. “Students listen to mentors in a different way than they listen to parents and counselors.”

The Zuckermans do not discount available help from school counselors, but those individuals are stretched thin, Dave said.

“They just don’t have the bandwidth to help all the kids,” he said. “There are 20 counselors in the Parkway district and 6,000 students in the high schools.”

College admissions officials have told the Zuckermans that students from families in the middle economic range need the most help because resources are available for the very poor and that wealthy families can pay for school.

The Zuckermans learned early that parents must be in the loop during the school selection process.

“The first year of the program, we worked primarily with students, and we kept failing,” Lois said. “We would settle on a good choice, but when the student went home to report on that choice, the parents would say, ‘No, you’re not going to a school in Florida’ or wherever. We figured out quickly that the parents have to be involved. It is a family decision.”

The couple have many success stories. One they are particularly proud of is a young man who went to college in France and is looking at graduate programs in Europe.

“He was educated in the U.S., but he was not a citizen, so he was considered an out-of-state student in every state, and that affects the tuition cost,” Lois said. “He was fluent in English and Spanish and had gone as far as he could here learning French, so it was ideal for him to an international student.”

Dave recalled another student, who was from an economically deprived background and was mostly on his own. He was accepted at several schools but was offered no financial aid. In the middle of April during the boy’s senior year — late for such an effort — a volunteer mentor worked the phones. The result? Significant financial aid for a seven-year medical school program at the University of Missouri-Kansas City.

“It’s never too late to make a plan, but it’s never too early, either,” Lois said. “Parents can take their kids to see what different colleges are like starting when the students are in sixth grade. Then when the time comes, those families will have an idea about whether to look at big schools or small ones, rural or urban ones.”

Everyone agrees that the process is complicated. But Mentors4College provides parents and students now going through that process with help from parents who have been through it – even some who were mentored themselves by the program.

Fun Fact: Though Lois was a psychologist, she says her true passion is parenting. Dave majored in mechanical engineering, “but I don’t have the right temperament for it – I couldn’t design my way out of a box.”