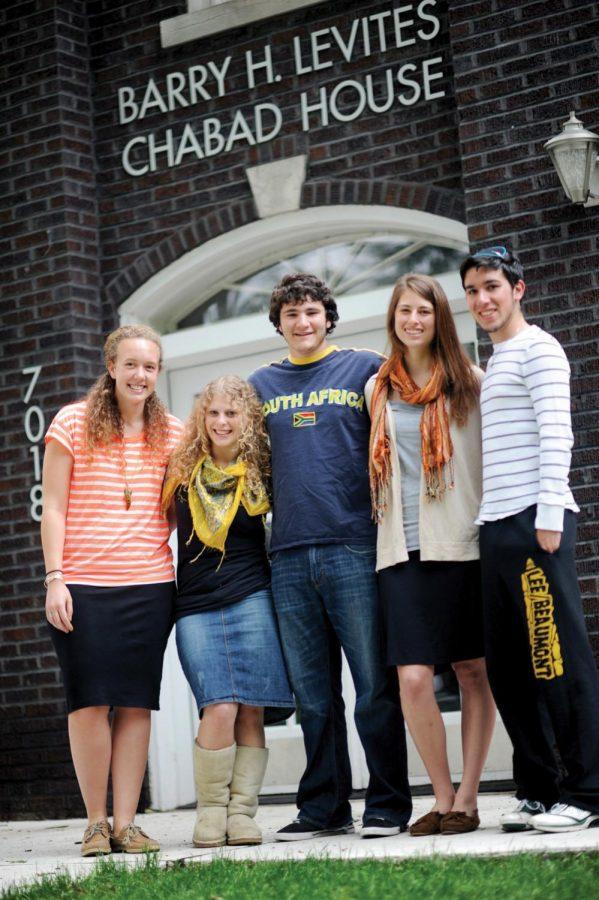 While his son plays in the next room, Michael Shapiro, president of Ohr Atid, couldn’t be happier to hear the sounds of activity filtering in from the other side of the Barry H. Levites Chabad House on Forsyth.

“For Eitan, it’s been amazing,” he said of his Jackson Park fourth grader who has Down syndrome. “He has such a great bond with the volunteers. He looks forward to coming every week. When we did our Pesach seder, he knew stuff from here. He was eager to share what he’d learned.”

Similar to a worldwide Chabad program known as Friendship Circle, the weekend sessions allow the students to partner with individual children to participate in games, songs and other activities centered around Judaic themes like holidays, Torah portions or Bible stories.

“For a college student to be volunteering two hours a week of their time consistently is very noble, especially since we start at 11 a.m. on Sunday mornings,” said Chana Novack of Chabad on Campus. “That’s early for college students who have so much in their lives.”

Lavin, a Jewish, near Eastern and Islamic studies major, said giving time is no hardship for her.

“My favorite thing is waking up on a Sunday morning while everyone else on campus is sleeping off their wild weekend. I get to come over here and set up for a day where I know that the kids are just going to come running through the door and give big hugs to all of us,” she said. “They’re excited to be here and excited to learn. That just gives me strength for the whole week.”

The 22-year-old Teaneck, N.J. native said that making a difference in the lives of children is its own reward.

“I also love working with the other volunteers,” she said. “We’re all from different ages. Everybody’s really involved and it’s given us a sense of community outside of this program because we share the special bond of working here doing this and giving of our time.”

Sometimes it provides bonds that go far beyond the classes themselves. During a recent visit to Young Israel, Lavin had an unexpected meeting.

“I walked in and one of our kids came up to me and wished me a good Shabbas and then told me what the parsha was that we’d studied in the last week,” she recalled. “It’s not always about what you learn that specific week. It’s also about creating a sense of community and partnership.”

Rosenstrauch said that, for him, the benefits of volunteering are clear.

“Wash U can be a very stressful school,” said the 19-year-old finance and math major. “It’s nice to know that I can take time out of what is normally a very busy day to do something purely for someone else.”

Back on the East Coast, Rosenstrauch was a volunteer for Friendship Circle so he knows the drill. Still, there were a few curves. The child he partners with didn’t like going to the house so instead, the pair books time at the nearby university athletic facility to play basketball.

He noted that the sessions don’t only let his student tap into the Jewish community but provide linkages for Rosenstrauch as well. Not long ago, he found himself invited to a Passover seder table by his student’s parents.

“It was a nice connection not just to him but to the family that I’m trying to help,” he said.

Weissman, 19, enjoys the experience but said it’s also been educational for her.

“There are a lot of skills that I’m learning here that I didn’t think I would, such as patience and a new appreciation for education in general,” said Weissman, an Atlanta native who has not yet decided on her major. “There’s all these little skills that I wouldn’t have learned otherwise.”

Like all the volunteer educators, Weissman tries hard to tailor activities to the interests of the child she partners with. She found the autistic boy enjoyed chess so she began teaching him Hebrew words related to the game.

“He used one of them today so that’s really exciting,” she said. “He actually integrated them into his vocabulary.”

She said the purpose is to make Jewish education enjoyable.

“I just hope they get the most out of it and learn what they need to know, the basic knowledge that every Jewish kid should know to get an appreciation for Judaism in general,” she said.

Originally from New York, Zeuner already had family ties in St. Louis but the COAST effort is helping the Unsung Hero to feel even more connected.

“I think coming in I knew I was going to enjoy it because I knew that I love working with kids and I love being Jewish,” she said. “Once I met the girl I’d be working with and had a few weeks to get comfortable with her while she learned to trust me, I knew it was a really good fit and we’d work well together.”

Zeuner is also hopeful that the skills she acquires through volunteering will help her in later life when she hopes to pursue a career in pediatrics.

“This is just a really great way to give back,” she said. “I was looking for a way to get involved in the community outside of the Wash U bubble and this gave me an opportunity to combine my interests of working with kids with reaching out to the local Jewish community.”

Zeuner, who also volunteers as co-president of the Challah for Hunger student group, said she likes teaching stories about the Patriarchs of the faith and is proud to see that the girl she partners with has retained a lot of the information over the course of the year.

“I hope they’ll remember the morals of the stories from our forefathers and just gain an appreciation for their Judaism by being able to interact with it in a way they feel comfortable with, which allows them to explore their relationship with God,” she said.

Tabachnick, a 20-year-old currently out of the country while spending the semester studying education of children with special needs in Denmark, said via email that she was pleased with the project’s results.

“I have always felt very passionate about working with children with special needs, whether in social or educational settings,” said the psychology and educational studies major who volunteers with the group. “The goal of COAST—to provide Jewish children with special needs opportunities for Judaic learning in an appropriate environment—is truly amazing.”

She said it is important and enjoyable to give children a way to connect to their religion in a fun and supportive setting.

“My favorite part of what we do is seeing the bright smiles on the kids’ faces every Sunday morning,” she said. “To see how much they look forward to and appreciate our program is incredibly inspiring.  I am so fortunate to be working with such a compassionate group of people to be making really lasting impacts in the lives of children in St. Louis.”

Baskir, 18, also feels it’s important to help others. Growing up in Boston, the pre-med student who is majoring in economics at Washington University, said students at his high school were very active in extracurricular activities and he wanted to continue that.

“When I came to college, I felt like a lot of the things I was doing, whether in student government or intramural sports, were just for me so the one thing I was really lacking was giving back,” said Baskir, who did volunteer work with the disabilities group Yachad in high school. “It really makes you feel fantastic.”

He said that for him, Sundays are like a refuge from the stresses of university life.

“It’s important to give back to the world as much or more than you take,” he said.

Rabbi Hershey Novack of Chabad on Campus agreed, saying the volunteers should be an inspiration to others.

“Students at Washington University and other universities around the area are truly an inspiration to the professionals and it’s a privilege to be able to work with them,” he said.

WHAT: The Chabad Ohr Atid Sunday Torah connects a dedicated group of Washington University student volunteers with special needs children for Judaic learning. The program meets at the Chabad on Campus-Rohr Center for Jewish Life