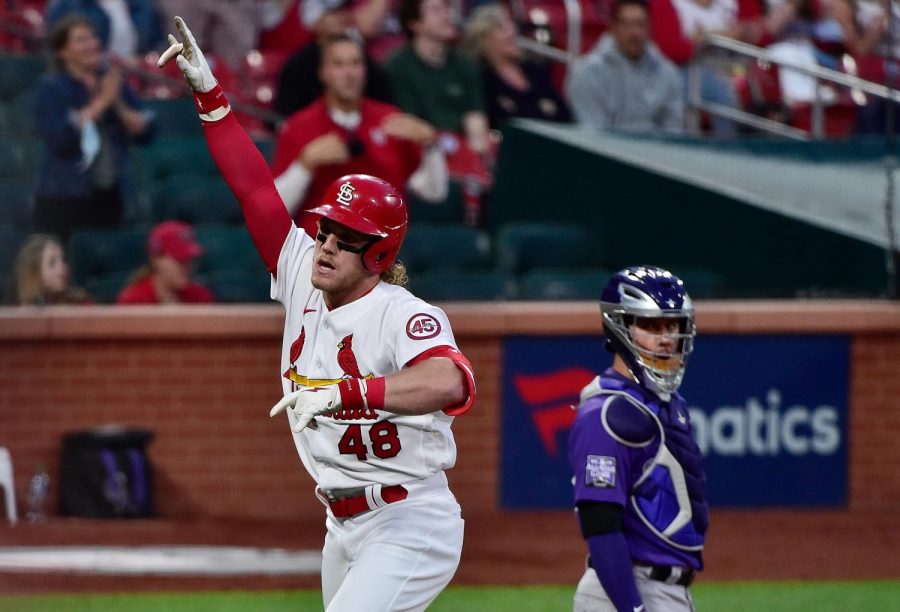 One of the most overlooked things from the shortened and halfway embarrassing St. Louis Cardinals’ 2020 season was the Harrison Bader performance at the plate. While the batting average wasn’t anything to write home about, the outfielder raised his slugging percentage from a meager .366 in 2019 to .443 last year. For the outfield, that was a boost in the right direction, one that has taken itself to a higher level with his presence this season.

Now, the small sample size for the pandemic-shortened season still left a less-sweet taste in the mouth of Cardinal Nation, due to the fact that Bader’s career (at least at the plate) was a roller coaster. He swung his way through the minors and quickly ascended with the big league club in 2018 with a 12 homer/3.6 WAR season but crash-landed with a disappointing follow-up campaign a year later.

But it’s not just the stats that irk some Cardinals fans; Bader’s on-field energy and confidence rub some wrong. Is he showboating, or just loving the game that has stuck with him since his early days as a kid in Brooklyn, N.Y.? While fans rushed to embrace former Cardinal Kolten Wong’s baseball exuberance, they have been quick to condemn Bader. A healthier performance at the plate this year has certainly helped quiet the critics.

Believe the fact that the outfield was a sludge until he came off the injured list last month, ranking near the low of the low in the Major Leagues in nearly every category that translated to wins. With Bader’s table-setting defense out in center and his quick bat at the plate, the results have been well above-average.

He’s already matched his home run total from 2020 in half of the at-bats, and his overall slash line of .283/.361/.528 represents the best start of his career. And while 16 games and 61 plate appearances don’t exactly equal pencil transferring to ink, Bader’s strikeout rate has dropped from a wildly unkempt 32% last season to just 13.1% this year. Like leadoff artist Tommy Edman, Bader has cut down the whiffs all the way to nearly being even with the free passes. Entering tonight’s game against the Pittsburgh Pirates, Bader has struck out just eight times while drawing seven walks.

Here’s the thing. I have no issues with Bader’s energy on the field. Like Wong and so many other players I have been lucky to cover in my time writing about baseball, optimistic fire on the field can lead to bigger results at the plate, and around the horn.

How much exactly does Bader like southpaws? For this career, he’s hit 15 of his total 35 career home runs against lefties… in 600+ less plate appearances. The only thing a lefty can hide from Bader is the pink slip to his arm.

It’s important to remember that Bader has less than 1,000 career plate appearances. Many, myself included, have judged this sports car before it could accumulate the proper amount of mileage. Others expect too much out of a guy who wasn’t exactly constructed to be Mike Trout. Bader’s defense, while not gold glove-plated just yet, has saved 37 runs in the outfield. Speaking of negative output on defense, he’s never posted a bad stat as an outfielder. Average at times (ironically, 2020 was his worst statistical season out there), but way above average most of the innings. If it was all about defense, Bader would already be a prince.

A more consistent bat will surely place a sword on his back by the time summer hits. At his best, Bader equalizes the lineup and defense. His bat can be explosive when it’s got the right timing and patience, along with a little fire. Take the charisma that he brings to the field and it would most likely hamper the production at the plate. All players are calibrated differently, requiring different traits for abilities to be unlocked. A locked-in Bader deepens the lineup and creates a fortress in the field for hitters to try and find hits inside.

Will it last? Only the baseball gods know, and they haven’t spoken since Albert Pujols hit a Brad Lidge pitch halfway across the country. All Bader can do is keep putting a barrel on the baseball and remain effective in high-leverage spots, which according to the esteemed Fangraphs, he hits for the highest average during. Pressure doesn’t seem to hurt the 26-year-old. It seems like off-speed pitches are starting to have issues too. If he starts hitting good breaking balls for solid power, watch out my friends.

Lastly, he’s making $2 million this season, which is $16.5 less million than bench bat and .109 hitting Matt Carpenter. My advice: Cool your jets about his attitude and just appreciate what he’s doing at the plate.

For the first time in a good while, the outfield isn’t embarrassingly bad, and Harrison Bader is a big reason for that. Surprise, surprise!