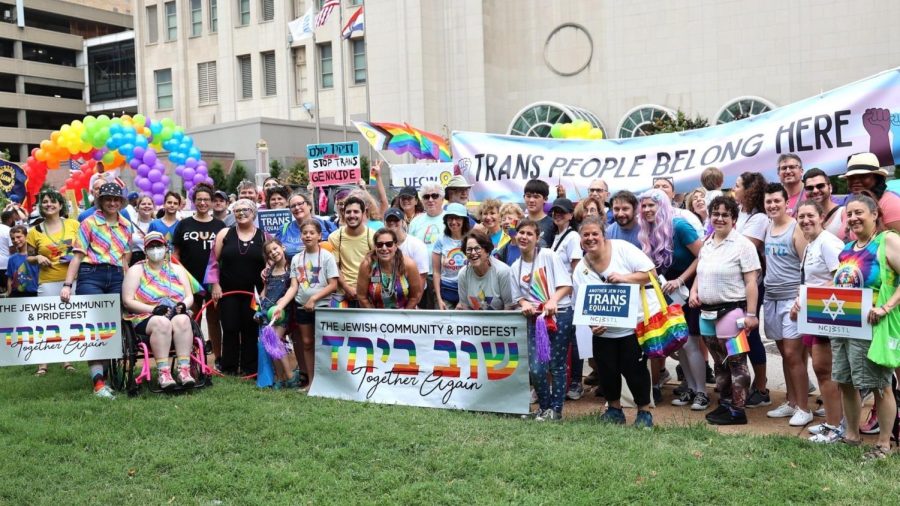 More than 80 members of the local Jewish community participated in the Grand Pride Parade in downtown St. Louis on Sunday, June 26.

A heavy rain shower just before the parade began didn’t dampen the spirits of the colorfully-attired marchers. Many wore the special PrideFest St. Louis Jewish community T-shirts designed by Josie Talve-Goodman, which can be ordered here: https://jewishfederation.secure-decoration.com/shop

Rabbi Andrea Goldstein from Congregation Shaare Emeth said she was proud that the Jewish community was welcoming to the LGBTQ+ community.

“Our congregation has worked very hard to make sure people know that we are welcoming to all races, all genders, all sexual identities, and I’m happy to show the Jewish community is part of the larger community at a really important time in our history where threats to minority communities are mounting, so a large turnout today is more important than ever,” she said.

Harriette Kraus, a member of Congregation B’nai Amoona, said she came because “When I was growing up I spent so many years with friends who had to hide who they were and now it’s wonderful that people are proud of who they are and aren’t afraid to show it.”

Lauren Lengyel, a member of Congregation Shaare Emeth, said she was marching because “I’m a counselor and I want to support all the LGBTQ+ youth and individuals I work with.”

Brandon Rosen, a Jewish Federation staff member, said he was participating “To support the LGBTQ+ community. I’m happy to be an ally and supportive.”