No, Ben & Jerry’s does not make its employees watch videos on the Israeli-Palestinian conflict

The ice cream company has been under increased scrutiny for its Israel politics since it banned sales in the occupied West Bank.

By Nora Berman, The Forward

The Jewish internet exploded this week over a Jewish Insider article saying that Ben & Jerry’s, which last year announced it would stop selling ice cream in the occupied West Bank, requires all new hires to watch four informational videos on the Israeli-Palestinian conflict.

A portion of one of those videos, the article said, features Omar Shakir of Human Rights Watch, which last year released a report saying Israel was committing the crime of apartheid against Palestinians; Israel had expelled Shakir in 2019 over his support for boycotting Jewish-owned West Bank businesses.

The story was shared by Jewish outlets including the Forward, The Times of Israel and The Jerusalem Post. Journalists and lobbyists jumped to accuse Ben & Jerry’s of antisemitism and violating its employees’ civil rights.

Latest me: As part of the mandatory onboarding process for new employees at Ben & Jerry’s, ice cream scoopers are required to watch videos explaining the Israeli-Palestinian conflict. Among the speakers: Omar Shakir, who was expelled from Israel in 2019.https://t.co/7CsohHAh3y

The only problem is that the story isn’t true.

A spokesperson for Ben & Jerry’s said by email on Wednesday that it does not require any staff to watch any videos about the Israeli-Palestinian conflict. Shakir did give a “lunch and learn”-style talk about the conflict to Ben & Jerry’s last year, the spokesperson said, but it was an optional, one-time offering, not part of any required curriculum for new hires. 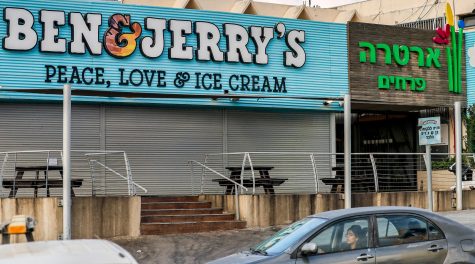 The Jewish Insider article, labeled “Ice Cream Scoop,” included a one-minute excerpt of what looked like a video made on a mobile phone, and quoted Shakir attributing the May 2021 escalation of violence between Israel and Hamas militants in the Gaza Strip to “discriminatory efforts to force Palestinians out of their homes in occupied East Jerusalem.”

The article said the video was part of a program the company dubbed “Scooper Series: Social Mission,” and included content on racism in the U.S., according to an unnamed employee who had viewed the videos.

Jewish Insider did not respond to multiple requests for comment. After publication, JI managing editor Melissa Weiss, who wrote the original article, tweeted, “We stand by our reporting earlier this week that Ben & Jerry’s requires new employees to watch a series of videos on the Israeli-Palestinian conflict. One Ben & Jerry’s employee who viewed the video also provided the below screenshot, which lists the four Israel-Palestine videos.”

We stand by our reporting earlier this week that Ben & Jerry’s requires new employees to watch a series of videos on the Israeli-Palestinian conflict. One Ben & Jerry’s employee who viewed the video also provided the below screenshot, which lists the four Israel-Palestine videos. pic.twitter.com/ZvNIwadL9u

Ben & Jerry’s and its parent company, Unilever, have been under scrutiny for their Israel politics since the ice cream company announced its planned pullout from the West Bank last July, saying that sales in Israeli settlements there were “inconsistent” with the company’s “values.” Ben and Jerry’s said it would not renew its licensing agreement with its local Israeli manufacturer, American Quality Products.

The decision provoked a tremendous backlash. Arizona and Illinois divested their pension funds from Unilever in response, and New York Gov. Kathy Hochul just last week gave the company a final warning to clarify its position before she makes a decision on whether to divest the state’s funds.

Those states are among 35 with laws on the books that take action against companies who boycott Israel or support the movement to boycott, divest from, and sanction Israel. The laws in New York, New Jersey and Illinois ban state agencies from contracting with companies that boycott Israel or “territories controlled by Israel,” and prohibit public pension funds from investing in those companies.

Unilever’s general counsel, David Schwarz, has said such laws should not apply in this case, noting that Ben & Jerry’s products will remain for sale within Israel’s 1948 borders.

“Unilever has never expressed any support for the Boycott Divestment Sanctions (BDS) movement,” he wrote in a December letter to New York officials. “Ben & Jerry’s has also stated publicly that its action is not part of the BDS movement.”

Shakir, who has been Israel and Palestine director of Human Rights Watch since 2016, said Ben & Jerry’s had asked him last August to speak to staff members about his work, including on businesses that operate in West Bank settlements. He said his understanding was that the lecture was part of a broader series of voluntary talks hosted by Ben & Jerry’s on a wide range of human rights issues.

Shakir said the talk lasted an hour or 90 minutes, including a brief Q&A session. The Ben & Jerry’s spokesperson said the talk was recorded, but declined to share the recording.

“This presentation was a voluntary offering to employees,” the spokesperson said. “We have many opportunities like this.”

Shakir has been a somewhat controversial figure in Israeli-Palestinian activism, accused of supporting BDS. The Israeli government revoked his visa to work there on Nov. 25, 2019, under a law that allows it to deport people who support boycotts of Israel. But Shakir and HRW say they have never endorsed BDS, only called for boycotts of Israeli businesses in the settlements.

Shakir called the Jewish Insider article inaccurate, but declined to comment further on it.

“Ben & Jerry’s has been on the frontlines of integrating social justice and human rights into the core of their work,” he said. “If only all other companies sought to similarly listen to and engage with a wide range of human rights and civil society stakeholders, I suspect far fewer companies would so routinely be contributing to human rights abuses.”

Editor’s note: The Forward’s opinion staff do not typically write news articles. Nora Berman, our deputy opinion editor, set out to find the videos Ben & Jerry’s reportedly required staff to watch in order to comment on them. Upon discovering that the videos were not, in fact, required, she switched gears to report that news.