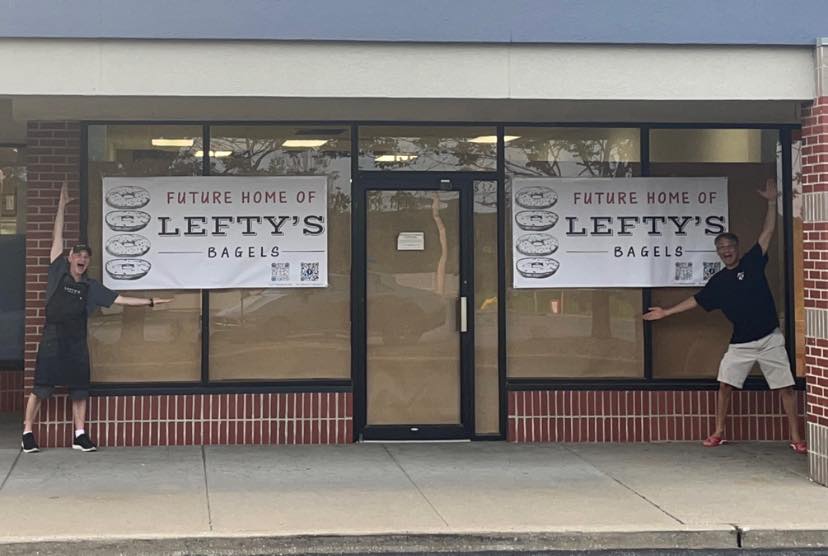 In April of 2021, Scott Lefton, co-owner of “Lefty’s Bagels” told the Jewish Light, “Judging how weekend sales go, we’ll see if we can grow it into weekday sales and then maybe have our own, brick-and-mortar dedicated place.”

Well, it appears sales Lefton and his partner Doug Goldenberg were successful in their endeavor. Since April 2021, “Lefty’s Bagels” has been making and selling fresh, handcrafted boil-and-bake bagels and making them available on weekends at The Trolley Stop Bakery in Chesterfield. But, on Monday, the company announced on Facebook it would be opening its own storefront location at 13359 Olive Blvd in the Woodchase Shopping Center.

“Scott’s been making bagels from home for the last couple of years  — it’s one of his passion projects,” explained Goldenberg, who is married to Lefton’s older sister Elizabeth. “He’d bake them for friends and family, and every time people kept clamoring for more. When we found The Trolly Stop Bakery, it was like, well, we can get into this without a whole lot of risk and see how it goes.”
Lefty’s Bagels: Perseverence paying off
“Since opening, we’ve learned if you want to get good at something, do it about 25,000 times,” said Goldenberg.

In just over a year Lefty’s has produced more than that amount of bagels and believe they improved their skills with each one.

“We’ve noticed that changes in temperature and humidity all have a really big effect on virtually all aspects of the bagel-making and baking process,” said Goldenberg. “We like to think we have gotten very good at sensing things like proof times and temperatures, all while trying to get a good feel on how to make a bagel.

Over time, Goldenberg and Lefton would change methods several times, looking for the right one to maximize labor and scale while maintaining their creativity.

“We’ve also learned a lot about our customers, what they expect and what they like. For example, our customers tend to prefer “savory flavors”. Our everything bagel is one of our most popular bagels and any time we make a new bagel flavor, the savory one tends to sell the best. We will definitely play to this in 2022 when thinking about new bagel favors.
More bagels, more bagels, and more bagels
Currently, Lefty’s produces between 350 and 450 bagels for sale on Saturday, but plan to grow that by acquiring new equipment to scale well beyond those numbers.

“We plan to make as many bagels as we want to meet market demands.  While we believe it will take some time to ramp up, we are working towards having bagels freshly baked each day, six days a week,” said Goldenberg.

In addition to bagels, Lefty’s is hoping to make various bagel sandwiches and lox available as well. With the ability to scale up bagel production, they will be re-instating pre-order and offer catering services.

“We think it would be great to offer bagel boxes and schmears for office meetings, parties, family gatherings, especially things like brunches, and everything from bris’ to bar/bat mitzvahs.

Lefty’s is constantly looking to expand on the current “bagel think” around the world. A good example is their “half-and-half” bagel.
The Half And Half Bagel
“One morning Scott was having fun topping the bagels and came up with the idea “for the indecisive customer,” said Goldenberg.

Customers quickly took to the new bagels, and soon Lefton moved onto his next concept, swirls.

“Instead of just a regular cinnamon raisin where the cinnamon flavor is throughout the dough, we wanted to have a unique way of distributing the cinnamon through the bagel to make a really pretty swirl pattern,” said Goldenberg.

This practice enhances the cinnamon flavor in the bagel and now they are doing the same thing with the chocolate chip and blueberry bagels.

Cinnamon raisin swirl bagel after boiling on a bagel board about to be baked in the ovens.
More New Stuff
Lefty’s is also experimenting with a collaboration with Diane Wood, the owner of The Trolley Stop Cookie Company.  Apparently, Diane makes a dynamite quiche recipe, so Lefton and Goldenberg are tinkering with a quiche stuffed bagel.

“Since you can do so many different flavors of quiche we’re going to have a lot of fun with this idea,” said Goldenberg.

And keep your eyes open for some new styles and flavors of bagels coming soon. Rye and Pumpernickel are expected soon, followed by the arrival of Lefty’s first whole wheat bagel.

“We found an amazing local wheat producer and grain mill in Ashkum, Illinois,” said Goldenberg. “This wheat is certified organic, non-GMO whole wheat and we think what they’re doing is really fantastic and look forward to featuring this flour in our whole wheat specialty bagel.