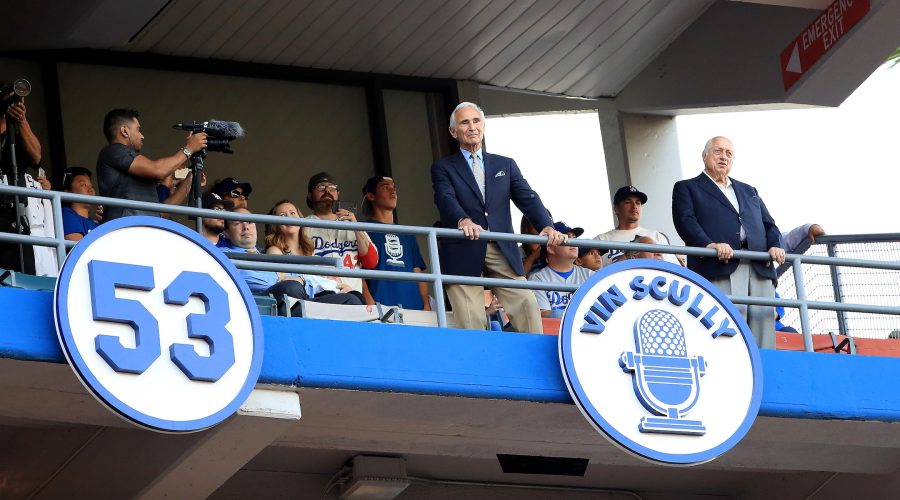 The legendary voice of the Dodgers, who died Tuesday at 94, helped generations of fans fall in love with baseball, from his first season with the Brooklyn Dodgers in 1950 to his final call in Los Angeles in 2016.

Scully was not Jewish. But over the course of a 67-year broadcasting career with the Dodgers, one that spanned from Jackie Robinson to current Dodger great Clayton Kershaw, the Hall of Famer covered the entire career of Jewish superstar pitcher Sandy Koufax.

Koufax played for the Dodgers first in Brooklyn and then Los Angles, from 1955-1966, putting together a breathtaking resume that included four World Series championships, three Cy Young Award wins for the game’s best pitcher and four no-hitters.

Through Koufax’s dominant highs and his injury-induced lows, Scully was behind the microphone, narrating it all for fans on both coasts.

In June, the Dodgers honored the 86-year-old Koufax with a statue outside Dodger Stadium. During his speech, Koufax thanked a litany of former teammates and coaches who helped him throughout his career. He had special praise for his broadcaster.

In the immediate aftermath of Scully’s death this week, one particular broadcast stood out: Scully’s call of Koufax’s perfect game on Sept. 9, 1965.

A recording of the final inning made its way around the internet, as baseball fans celebrated the soft-voiced broadcasting icon for his poetic knack for bringing fans into the game. Memorably, Scully repeatedly makes note of the time on the scoreboard’s clock (“The time on the scoreboard is 9:44. The date, September the ninth, 1965, and Koufax working on veteran Harvey Kuenn.”), reminding fans that they were witnessing history.

Below is the final inning of Koufax’s lone career perfect game, delivered by Vin Scully. And here is the transcript of that call.