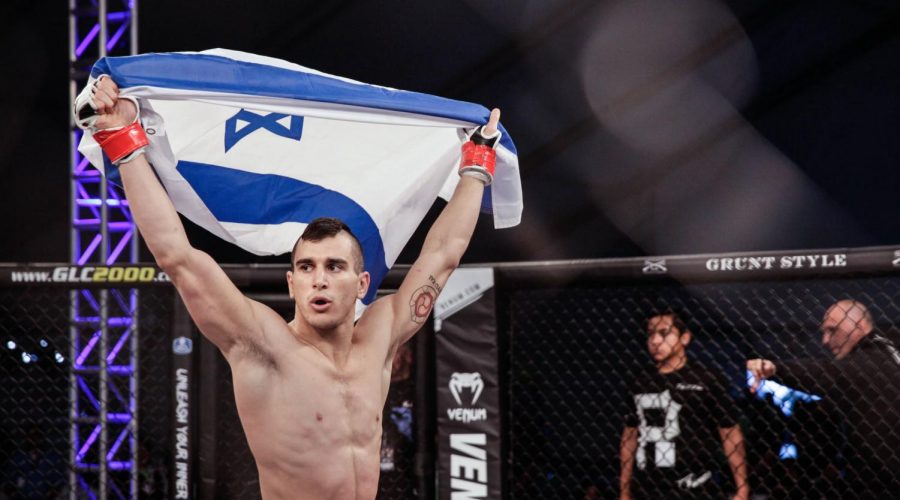 (JTA) — Natan Levy is no stranger to fighting. After moving to Israel from his native Paris as a boy, Levy would often tangle with kids picking on him because of his accent.

But this aggressive prowess has helped some of his wildest dreams come true, silencing plenty of doubters along the way.

Levy, 29, and now living in Las Vegas, became only the third Israeli to sign on with the Ultimate Fighting Championship, the world’s premier mixed martial arts organization, with an impressive victory last month in a series promoted for up-and-comers in the sport.

At 6-foot-1, Santana had a sizable height advantage over the 5-6 Levy. Plus Levy typically fights at 145 pounds, moving up to tangle with Santana, a Brazilian jiu jitsu specialist who had won by submission in five of his six bouts.

“It looked at the weigh-ins like David and Goliath,” Levy, who also remained unbeaten in six bouts as a pro, said in the postfight news conference, “but I prevailed. I showed that it’s not about the size of the dog in the fight but the fight in the dog.”

For Levy, who signed a deal with Ultimate Fighting Championship for four bouts with the details undisclosed, the road to achieving his dream was rife with uncertainty.

“People would laugh when I’d say that I want to leave everything to be in the UFC,” Levy said at the news conference. “People literally laughed in my face.”

Born in Paris to a traditional Jewish family, Levy’s parents divorced when he was 4 years old. His mother asked him and his two brothers where they wanted to live, Paris or Herzliya, Israel, where they had previously lived for a period. The boys chose Israel. Levy was about 5 when he made the move.

“I was kind of traumatized by the divorce and my dad not being around anymore,” Levy told the Jewish Telegraphic Agency, “so I would just fight all the time. I also had a French accent, so kids would make fun of me, which would lead me to attack them. I fought at least once every recess.”

With time, Levy learned to funnel his aggression through martial arts. He didn’t have immediate success.

“The minute it got boring I would leave,” Levy recalled.

But by 13 he began weekly martial arts training. By 15 he was practicing three hours a day. By 17 he received his kung fu black belt, and at 18 he traveled to Okinawa, Japan, to receive his black belt in karate.

At 22, Levy found himself back in Israel working as an instructor. Yet a competitive fire burned inside. Modern MMA, which was historically dominated by wrestling, Brazilian jiu jitsu and kickboxing, had seen the recent success of UFC karatekas Lyoto Machida and Stephen Thompson.

This gave Levy hope, despite the fair share of doubters. Unfazed, Levy decided to migrate to Las Vegas, an MMA hotbed, where he began adapting his karate and kung fu skills to the MMA rules: All martial arts are acceptable and minimal rules are employed. This leaves fighters susceptible to attacks from disciplines with which they may not be familiar.

Levy had to learn which karate and kung fu techniques proved effective, as well as to pick up the grappling and submission arts from scratch.

It proved to be far from an easy transition. Over the first few years, Levy was forced to travel between training in Vegas and work in Israel. Eventually he succeeded in turning the sport into his full-time job, training up to three sessions a day, but had obstacles, as many fights were canceled at the last minute. Other opportunities opened up, such as being offered a contract at Bellator, the UFC’s competitor organization, but he was focused on the latter’s caged octagon.

Levy found practical wisdom for dealing with uncertainty from within the cage.

With the win over Santana, Levy dealt with an unpredictable and creative opponent while putting his evolution as a well-rounded mixed martial artist on display.

Afterward, he was ecstatic about achieving his goal.

“It’s a dream come true,” he said at the news conference. “I left everything back home seven years ago, like some madman, just packed everything and went to Vegas to follow this dream.”

White, the UFC’s outspoken president, was impressed — and pleased an Israeli was joining his organization.

“[Levy] dominated a guy up a weight class on only five day’s notice, and subbed a guy who’s 6-0 with five submissions,” he said, grinning. “I look forward to seeing his standup in the UFC.

“Our lawyers and our Hollywood agents are going crazy right now. These guys have been waiting for a guy from Israel.”

White was criticized for the statement, with some believing it was anti-Semitic. Levy didn’t find it a problem.

“What [White] said was true,” Levy said. “I literally know his lawyers and agents who were hitting him up. What do you want him to do, to lie? They want an Israeli guy!”

Levy was flooded with well wishes on social media even as an amateur. He readily embraces his national identity.

“When I wear the Israeli flag to my fights, I don’t do so to announce ‘Here I am, Natan Levy, the official representative of Israel,’” he said. “I just wear it because I’m proud of where I’m from. It’s not me honoring Israel; it’s the other way around.”

He takes even greater pride in representing Jews worldwide.

“I’m here to show the world that we’re not only smart, well educated and well mannered, but if you push us, we can fight, we can defend ourselves and you’ll regret it!” Levy joked, adding, “When somebody Jewish writes me and tells me they’re inspired by me to do sports, or they’ve been bullied and now feel that they can stand up for themselves, I swear it makes me more happy than winning a world title.”

Levy is not the only Jewish-Israeli athlete to make waves recently. Just days after his victory over Santana, Deni Avdija became the highest Jewish and Israeli NBA draft pick in history.

For Levy, both break stereotypes.

“I’ve heard the sentence ‘Jews are supposed to be managers, not athletes,’ and I like proving that wrong,” Levy said. “We don’t have the best starting point; Israeli sports culture is kind of behind. But we come from all over the world, why wouldn’t we be able to do something others can?”

With expectations high, the self-anointed “JewJitsu” practitioner hopes to be someone that fans and future generations of Jewish athletes can look up to.

“This is only the beginning,” Levy said of himself and Avdija. “We [Jews] have something to fight for.”

Further, Levy wants to be more than just a Jewish Israeli role model.

“We’re Jewish. We’re Israeli. We represent this wherever we go,” he said. “We need to be humble. Respectful. Not to mistreat people. Whoever mistreats us will pay — but we don’t do that to others.”

“If someone talks smack to me, yes, I’ll tell them what’s on my mind,” he said, “but I don’t intend to start acting like a tough guy. I couldn’t if I tried — so why try? It’s just not me.”

Now Levy will stay in Vegas, recovering from his fight and preparing for his UFC debut. In America and under COVID restrictions, Levy remains separated from his Israeli family, whom he hasn’t seen for over a year and a half. Yet after living in France, Israel, the U.S. and Japan, he has learned to find home wherever he finds himself.

“I always look to the Nevada mountains and they remind me of Eilat,” he said, “and then I think: Jews have always traveled in the desert — I’m right where I need to be.”