What was lost with murders of Martin Luther King Jr. and Robert F. Kennedy? 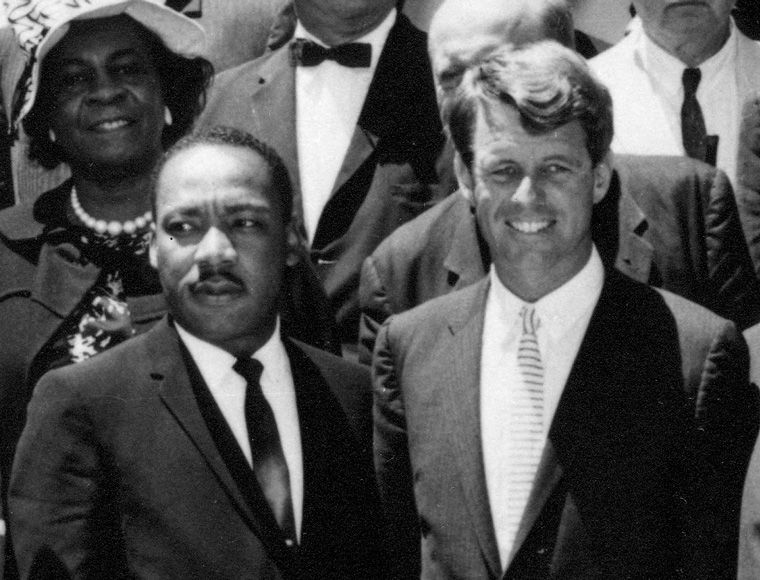 “Has anybody here seen my old friend Martin?  He freed a lot of people, but it seems the good die young.  But I just look around and he’s gone.” — Lyric from “Abraham, Martin and John,” by Dion DiMucci

It is hard to believe that it has been 50 years since two of the nation’s iconic civil rights and political leaders—Rev. Dr. Martin Luther King Jr. and Sen. Robert F. Kennedy — were felled by assassins’ bullets.The nation was already in the depths of near despair with protests against the unwinnable war in Vietnam tearing at the very fabric of American society. College campuses and the streets of major American cities were ablaze with violent protests and brutal police suppression. President Lyndon B. Johnson, who had steered historic civil rights legislation through Congress, was hopelessly bogged down in Vietnam. With a weary voice, he announced that he would not seek another term as president.  The mood of the nation was about as low as it had been during the depths of the Great Depression.

Then, when it appeared that things could not get worse, they did.

On April 4, 1968, at a campaign gathering in Indianapolis, Robert F. Kennedy quieted down the crowd. “I have some very sad news for all of you tonight,” he said. “Martin Luther King was shot and killed tonight in Memphis.”

The crowd wailed in shock and disbelief. The established leader of the American Civil Rights Movement, who had earned the Nobel Peace Prize at the age of 39, was suddenly ripped from us at the very time his unique qualities were needed most.

King’s soaring rhetoric, at its peak during his historic “I Have a Dream” speech in August 1963, was silenced forever as events unfolded that required his perspective and powers of persuasion. King was assassinated by a white supremacist racist named James Earl Ray—on the balcony of the Lorraine Motel in Memphis, which has been made part of a national civil rights museum.

After the withdrawal of LBJ from the 1968 presidential race, Kennedy seemed on a secure path to the Democratic nomination. Many supporters had high hopes that he would pick up the torch of leadership of his late brother, John F. Kennedy.

The younger Kennedy, who served admirably as attorney general and political strategist during his brother’s administration, had grown from the sharp-edged and two-fisted politician to become a more visionary and progressive statesman.

But then as if the American people did not have enough tumult and horrible news to contend with, Robert F. Kennedy himself was assassinated.
Brothers in Arms
On June 5, 1968 at the Ambassador Hotel in Los Angeles, after winning the California presidential primary, Kennedy told his cheering supporters that the American people had made it clear that it was eager to heal the deep divisions within society with new leadership that he was determined to provide. Following his victory statement, he left the hotel’s ballroom and went through the kitchen, where he was shot three times by Sirhan Bishara Sirhan, a 22-year-old Palestinian with Jordanian citizenship. He died the following day.

“I did it for my people,” shouted Sirhan, who was subdued and arrested on the spot. A few days earlier, Kennedy gave a speech criticizing President Johnson for refusing to sell Israel some desperately needed Phantom fighter jets to keep its skies safe in the months after the 1967 Six-Day War.

Sirhan, who had heard the broadcasts of Kennedy’s remarks, became enraged and took out his anger on the man who perhaps provided the best hope for a brighter future at the end of a nightmarish period in American history.

Sirhan confessed to the crime at his trial and received a death sentence on March 3, 1969. However, since the California State Supreme Court had invalidated all death penalty sentences in 1972, Sirhan has spent the rest of his life in prison. (James Earl Ray, King’s assassin, was to die in prison while serving a life sentence for his crime.)

According to The New York Times, Sirhan said that he believed Kennedy was “instrumental” in the oppression of the Palestinians.  Hubert Humphrey was the eventual 1968 nominee of the Democrats at their fractious convention, and ended up losing to Richard Nixon by a small margin.

Both Martin Luther King Jr. and Robert F. Kennedy had a very positive relationship with the American Jewish communi ty and both were very supportive of the State of Israel and the Soviet Jewry movement. There was no daylight between the positions of MLK and RFK and

Rabbi Abraham Joshua Heschel said he believed he was  “praying with his feet” when he marched with King in Selma in 1965.

Two of the three lives taken in the Mississippi Summer of 1964 were Jewish young men—Andrew Goodman and Michael Schwerner. Along with their African-American friend, James Chaney, Goodman and Schwerner were in Mississippi registering voters when they were ambushed and brutally murdered by members of the Ku Klux Klan —who ended up being acquitted in the original trial for their murders.

When King was assassinated, the Jewish community of St. Louis joined with the African-American community and local elected officials in a March for Unity.
Bridging racial/religious divides
In the years since the deaths of Kennedy and King, life in America has become much more divided and complicated, especially regarding issues of race and religion.  No longer is support for Israel as strong as it was during the days of King and Kennedy.

Recently, the Barbara and Michael Newmark Institute of Human Relations of the Jewish Community Relations Council teamed up with the Missouri History Museum for a series of programs titled, “A Shattered Nation: A 50-Year Retrospective.”

On June 6, the anniversary of Senator Kennedy’s death, the Institute will sponsor another event at the History Museum, featuring vintage footage of Kennedy’s career. The film was produced by the late Oscar-winning film documentarian Charles Guggenheim, and will be followed by a discussion (see related news brief on page 4).

A newly published book by best-selling author Larry Tye, “Bobby Kennedy:  The Making of a Liberal Icon,” (Random House, $32) contains an extensive discussion of “How Bobby Kennedy Cemented His Relationship With American Jews.”

Robert Kennedy reached out to American Jews as early as his college days, when he, as noted by Tye, “went out on a limb to attack the Jew-bashing demagogue Father Leonard Feeney.” In a series of stories from the Middle East that he wrote for The Boston Globe in 1948, Robert Kennedy gushed about the “immensely proud and determined Jewish race” and called the State of Israel “a truly great modern example of the birth of a nation with the primary ingredients of dignity and self-respect.”

Tye notes that “With Jews as with blacks, Bobby was a work in progress. He started from a place of little interaction or understanding, but he came to identify with their collective suffering and to earn their trust.

Kennedy was on the same page as the American Jewish community in deploring the racist apartheid system in South Africa and traveled there to publicly support the eventual winners in the struggle for black majority rule.

And so, half a century after Martin Luther King and Robert F. Kennedy were taken from us, how best can we honor their legacy? We can learn from their careers, but renewed energy will have to come from the younger generation.

In St. Louis today, high school students in the yearlong Cultural Leadership program learn about the African-American and Jewish experience together, and learn to become social justice activists — “troublemakers of the best kind,” as the program puts it. During a three-week journey throughout the South and the East Coast, students visit a number of important civil rights sites and explore the legacy of leaders like King.

Recently we have seen the power of young people to come together for political action. The horrific school shooting in Parkland, Fla. gave rise to the rise of the March for Our Lives movement, entirely created and led by young people who want to end gun violence in America. Almost overnight, March for Our Lives demonstrations took the nation by storm in communities across the nation, including St. Louis.

Such movements seem to harness the legacy of King and Kennedy to see a new path forward and mobilize for social action to change society for the better.  To honor their memory, let us be sure that we support efforts and movements that strive to connect people of all backgrounds and in all nations, and help them to live together in harmony.