What a Vietnam-born artist can teach us about Jewish memory 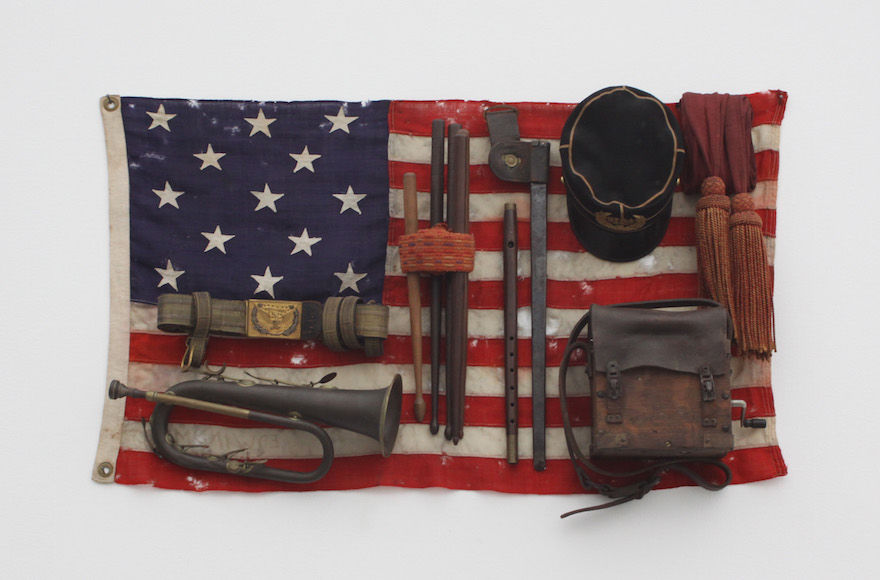 Dahn Vo’s “She was more like a beauty queen from a movie scene,” on display at the Guggenhim Museum in New York, features a 13-star American flag and musical instruments bought at auction. (Jean-Daniel Pellen, Paris/© Danh Vo)

Andrew Silow-Carroll
NEW YORK (JTA) — The Danish artist Danh Vo was born in Vietnam and raised a Catholic — essentially the last person you’d expect to be written about in the Jewish press. The Guggenheim Museum here is staging a major retrospective of Vo’s work, which if I were to describe on one foot is historical bric-a-brac that Vo has picked up at auctions and estate sales and arranged in sparse clumps along the Guggenheim’s spiraling rotunda. It doesn’t sound very Jewish or even very interesting, but trust me, it’s both.

Vo’s preoccupations reflect his upbringing: At age 4, his family fled communist rule in South Vietnam on a boat his father made and was picked up by a Danish freighter. Among his themes are colonialism, imperialism, religion and diasporism. He teases out these themes with found and often homely objects — fragments of minor Renaissance sculptures squeezed into packing crates, the engine block from his father’s prized Mercedes.

He is preoccupied with dismemberment: The Guggenheim exhibit features segments of the full-size replica of the Statue of Liberty that he created and whose 250 fragments he dispersed among galleries and museums around the world. He cut up a statue of St. Joseph so that its segments could fit into a series of carry-on bags — which he flew across the Atlantic and scattered throughout the museum. Much of this relates to the martydom of the 19th-century Catholic missionary Jean-Théophane Vénard, who literally was dismembered for proselytizing in pre-colonial Vietnam. But it also seems about the idea of diaspora.

Some of his most sneakily powerful works are innocuous-seeming objects with surprising and creepy historical resonance. He obtained the tip of the pen used to sign the 1964 Gulf of Tonkin Resolution. There is a series of letters from then-Secretary of State Henry Kissinger to theater critic Leonard Lyons thanking Lyons for obtaining theater and opera tickets at about the same time Kissinger was overseeing the secret bombing of Cambodia.

Throughout the exhibit are fragments of two of the chairs from John F. Kennedy’s Cabinet room, a gift from his widow to Robert McNamara, the secretary of defense who oversaw the escalation of the Vietnam War.

Vo was once asked if his appropriated objects are “talkative.” If so, he replied, “I hope they aren’t saying anything too specific. I think we always bring a lot to a work when we look at art and what we bring to the work engages us in a conversation with the objects in front of us. In that way, I suppose they are talkative. But I try as hard as possible not to give them ‘lines.’”

It’s the idea that objects can talk that aroused my Jewish soul. Although we like to call ourselves the “people of the book,” much of Jewish memory is based on communication with objects. Many of those are homey and personal: an ancestor’s kiddush cup, a ship’s ledger from Ellis Island, the thumb-sized slide viewer with a picture of your parents taken during that weekend in the Catskills. And sometimes those objects are historical and universal, like the piles of shoes and eyeglasses at Auschwitz or the Western Wall itself.

A week before I saw the Vo exhibit, I was at The Jewish Museum, a few blocks away, where they have recently remodeled their third-floor permanent collection. Previously, objects were displayed chronologically and a little stodgily in what I’ve come to think of the “March of the Torah Breastplates” style of Jewish museums the world over. The new exhibit blows up that model, with artifacts and art arranged thematically, favoring odd but meaningful juxtapositions over chronology.

Among the more arresting displays is a nearly room-size vitrine inside of which is displayed a single object: a charm bracelet that belonged to Holocaust survivor Greta Perlman when she was a prisoner in the Theresienstadt camp. The fingernail-size charms, which she gathered from other inmates, include a tiny lice comb, a bullet and various versions of the identity number given her by the Nazis: 433 M. The charms are both harrowing and, well, charming. Each depicts an aspect of her ordeal and attests to the craftsmanship, and dignity, of the artists who made them. Placing this small object in so large a case, like a crown jewel or a saint’s relic, forces us to pause and consider the individual stories within the enormity of the Holocaust.

There’s a direct line between Perlman’s bracelet and Vo’s art. They are about personal memory and world history. They come from people whose lives started as one thing and after a calamity became something else. They are about small people — the perpetrators and the victims — and huge events.

When my kids were in day school, one of the year’s highlights was the Jewish Heritage Fair. The kids were asked to bring in and research family heirlooms and create a pop-up museum. They brought in passports, prayer books, children’s clothes and bank notes from countries that no longer existed. The objects talked and talked and talked: of lives lost, of near escapes, of second chances in far-away countries. “Curating” the objects brought our kids into the conversation — and made it ever more likely the conversation would continue.