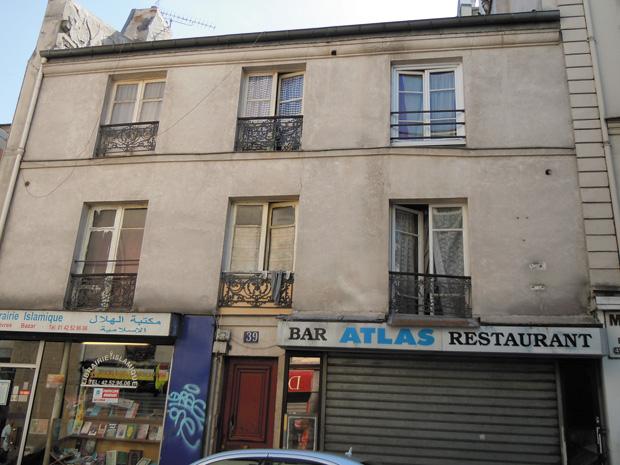 The Montmartre building where Weinman’s grandmother once lived.

Last spring when my sister Jen approached me about a trip to Paris, I rolled my eyes.  Most people would check their bank accounts and calendars, but not me.  My first visit there in 2007 was ill-starred: lost luggage, less than pleasant locals, and a friend stricken with food poisoning.  I swore I’d never return.

Jen and I have a connection with Paris, but for a long time I didn’t care.  Our grandmother was born there in 1906, six years after her parents fled a pogrom in Iasi, Romania.  For reasons unknown to us, the family stayed in Paris from 1900 to 1911 before finally coming to St. Louis.  (Bubbe told stories of riding in steerage on the boat from Le Havre and sleeping in hammocks.)

She grew up speaking French and Yiddish, singing “La Marseillaise,” and playing with her sister and other Jewish immigrant kids.  One hundred years ago, Eastern European Jews and poor artists called Montmartre home.  The artist factor especially excited me.  Bubbe could have passed Picasso on the street.

Eventually I mellowed about the city but still had no desire to go back.  I wanted to visit and revisit too many new and favorite places, not spend time and money in a city full of nothing but misery.

But in the past few years, Jen had developed an increasing interest in Paris.  She was a big fan of food personality Ina Garten, who loved the city; Jen liked the sound of French; and she was a foodie.  Jokingly, I told Jen she was the only person who could get me to return.

Eight months ago she called my bluff.  “I want to see Bubbe’s apartment building,” she said. We have our grandmother’s home address on a French emigration form – 39 rue Myrha in Montmartre.  I wouldn’t admit it, but Jen tapped a vein of curiosity.  What would it feel like to see the building and retrace Bubbe’s steps?

Three days into my second trip, on Rosh Hashanah, we took the mètro north to Montmartre (the real Montmartre, the one most tourists never see).  A century ago, this was an immigrant neighborhood.  Today it still is, now populated by North Africans.

We walked past restaurants and cafes, tiny grocery stores, and nail and hair salons.  Store signs advertised in French, Arabic, and occasionally English.  Often we stepped off the narrow sidewalks so people walking in the opposite direction could get by.  We passed women with elaborately shaped headscarves; kids carrying plastic bags full of fruit; and men kibbitzing by storefronts.  Cars sped by too fast.   Languages we didn’t recognize filled the streets.

“I felt like it took a long time to get to the apartment,” Jen says of the visit.  When we turned the last corner, my heart beat faster.  I recognized the landmarks from Google Street View.  And then we saw it: a plain three-story building with an Islamic bookstore and a restaurant called Bar Atlas on the ground floor.

We took out our cameras for some quick pictures, unable to stop staring.  Bubbe had lived in that building.  “It was so magical to see the front door and open windows,” Jen continues.  “They were incredible especially because they had lace curtains, a style that could have easily been there at the turn of the last century.  I could easily imagine a Jewish family with a new baby looking out of those windows.”

It was special for us to see the building on Rosh Hashanah, a time for new beginnings and reflections on the past.  I felt like we’d come home, as if we closed the circle that opened when my relatives left the city.  In 1911 they undertook a journey to be free from persecution and create a better life.  In 2012, Bubbe’s granddaughters returned to Paris on a journey to learn more about who we are and where we come from.