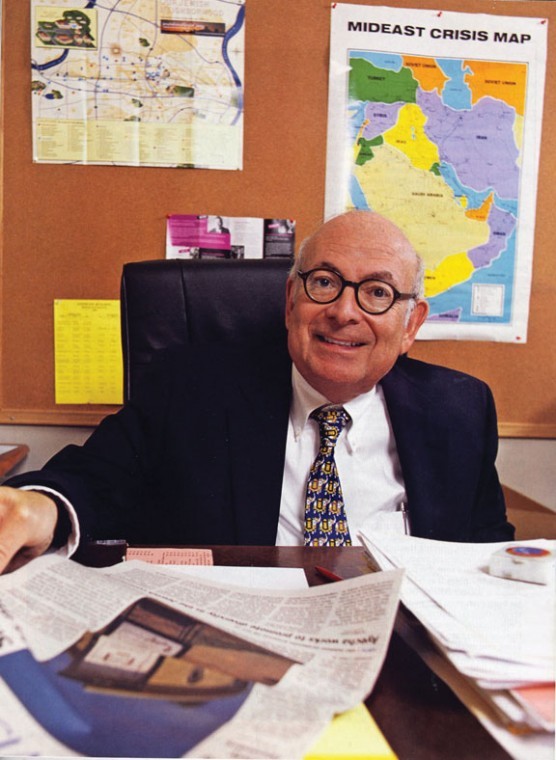 This week’s Cohnipedia marks the first anniversary of the column’s debut. Cohnipedia is designed to focus on specific persons, places or events in the 200+ years of St. Louis Jewish history.

It seems fitting for this first anniversary installment to celebrate local treasure Tommy Goldenberg, who thankfully is still very much with us. For over 50 years, Goldenberg has provided the “soundtrack” to countless Jewish community events, simchas and milestones, expertly playing his familiar accordion, backed by longtime fellow musicians and singers, and bringing real joy to our community. If that were not enough, Goldenberg and his wife Esther are also extremely generous philanthropists in our community.

The Jewish Community Center’s Tommy & Esther Goldenberg Senior Adult Fund provides contributions used by the Adult Program and Services Department. This fund purchases items to support senior activities throughout the JCC, including the purchase of six passenger buses to support senior programming, with assistance from the state of Missouri. These state-of-the-art buses, along with the purchase of a van, have provided transportation and the delivery of life-sustaining meals to thousands of seniors.

Goldenberg has also provided entertainment — without charge — for local and statewide sponsored senior citizen centers, retiree groups, nursing homes, hospitals, veteran’s homes, community centers, charitable organizations and clubs. He has been volunteering extensively for the JCC for over 35 years and the Jewish Center for Aged (now the Cedars at Town & Country), for about 40 years, in addition to the Covenant/Chai Apartments, the Crown Center, the MEAA Senior Fair and musical programs for the Alfred Fleishman B’nai B’rith Missouri Institute of Judaism.

Speaking of B’nai B’rith, its St. Louis organization last week hosted and coordinated, under executive director Diane Maier, a community-wide tribute to Goldenberg, which was attended by over 330 people at the JCC. It was one of the few events attended by Goldenberg in which he did not play the accordion. It was the community’s turn to say a collective “thank you” to Goldenberg, who turned 90 last December, and celebrated 68 years of marriage with Esther last September. A Tommy Goldenberg Day Proclamation, introduced by Rep. Jill Schupp, D-Creve Coeur, and unanimously approved by the Missouri House of Representatives, was read aloud to those in attendance. Irene Fox, who has written and performed in countless shows through the years with Goldenberg, joined in the “love feast” for this remarkable man. (Disclosure: it was my honor to serve as master of ceremonies on that festive July 1 evening.)

A good laugh was enjoyed at the tribute thanks to Goldenberg’s longtime musical ensemble partner Jerry Gotler. He recalled a gig the two played at a Sammy fraternity party back in the late 1950s. “Tommy was not really into rock and roll, and the most ‘current’ song he could play was ‘Mack the Knife.’ He also could play ‘The Anniversary Song’ very well, and so these 18-year-old fraternity boys danced to that old tune a total of 19 times that one evening. And no one complained,” Gotler told the crowd.

May Tommy and Esther Goldenberg and their entire wonderful family and countless friends, have many more anniversaries of their own, and may they go from strength to strength in the years ahead.