There she was: Bess Myerson, Miss America 1945, a source of pride 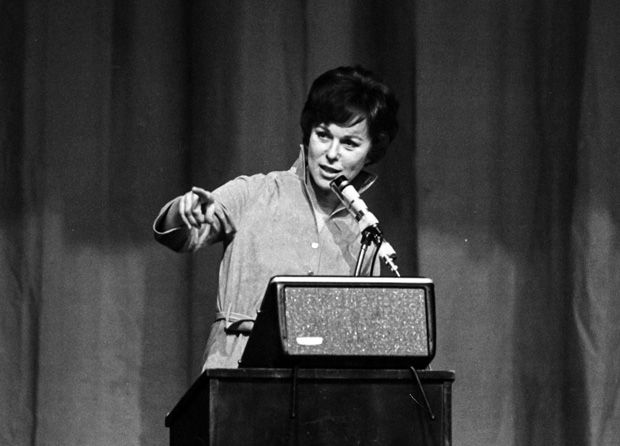 Bess Myerson, who in 1945 became the first Jewish Miss America contest winner, addresses a sold-out crowd at an event sponsored by the Women’s Division of the Jewish Federation of St. Louis, hosted at Temple Israel on Feb. 9, 1977. Photo:  David M. Henschel.

The passing of Bess Myerson was especially painful for the generations of American Jews who took pride in the fact that she was the first – and thus far only – Jewish winner of the Miss America contest in 1945. Myerson, whose later career was clouded by scandal and sadness, died Dec. 14 at her home in Santa Monica, Calif., at the age of 90. She died as she had lived in recent years – in relative obscurity.

Myerson’s selection as Miss America came just days after the formal end of World War II – and the Holocaust. Throughout her reign and throughout her mostly dazzling public career, Myerson was always proud of her Jewish religion and was an endless source of pride to American Jews in the post-Holocaust generation.

In contrast to many celebrities of her era who downplayed or even hid their Jewish origins, Myerson became a passionate supporter of Israel and the Anti-Defamation League, and she donated $1.1 million to help found the Museum of Jewish Heritage in New York City. She also was a frequent and very popular speaker at Jewish Federation and Israel Bonds events throughout the nation, including at a memorable, sold-out Women’s Wednesday event sponsored by the Women’s Division of the Jewish Federation of St. Louis.

Meyerson spoke to a standing-room only crowd at the event, which was hosted by Temple Israel on Feb. 9, 1977. At the time, the Jewish Light reported that Myerson was “a woman who guards her privacy and often demands to be alone,” while at the same time possessing “the ability to chat gregariously with the press and to engage an audience.” In her address that afternoon, Myerson “persuasively pushed two of her pet causes: Israel and consumerism.”

Myerson also discussed how her being crowned Miss America 1945 enhanced her Jewish identity. Born in the Bronx on July 16, 1924, to Yiddish-speaking immigrant parents, Louis and Bella Meyerson, Myerson said she had grown up in the Sholom Aleichem Apartments in the Bronx, from which she set out to enter the beauty-and-brains pageant.

“It was September 1945,” she recalled. “We had just ended two wars. Six million Jews had died.” She added that “winning became more than just my personal little victory.” As the semifinals and then the finals were reached, news of her advancement spread, and thousands of Jews packed the pageant hall in Atlantic City.

To the surprise of onlookers, Myerson did not burst into tears upon receiving her crown, but it was not because of a lack of overwhelming feelings.

“The reason I didn’t cry was that the title really never belonged to me,” she said. “When I walked down the aisle, nobody looked at me – they were all hugging each other. As Jewish as I was before Atlantic City, I felt more rooted.”

Susan Dworkin, in her 1987 book “Miss America, 1945,” writes, “In the Jewish community, she was the most famous pretty girl since Queen Esther.”

Myerson built on her renewed rootedness by putting her feelings and the pride of the American Jewish community into action. She became a member of the United Jewish Appeal Speakers Bureau and a national commissioner of the Anti-Defamation League and for five years served as Greater New York chair for State of Israel Bonds.”

Myerson took note in her remarks of the great pride world Jewry felt after Israel rescued more than 100 hostages held by Palestinian and German terrorists in Entebbe, Uganda, just months before her St. Louis appearance.

“Even in a moment of triumph,” she said, “We must never allow ourselves to became smug or complacent. The world never runs out of tyrants.”

She also forthrightly denounced the Arab boycott of Israeli products and businesses and denounced Northwestern University for having Holocaust denier Arthur Butz as a tenured faculty member.

Myerson proved that winning the Miss America crown meant more than having a pretty face. She lent her name to support Israel and the American Jewish community and to aggressively advocate for consumers at all levels of American business and commerce.

In later years, she was a popular guest on TV and radio shows, including “I’ve Got a Secret,” and was a frequent escort of the late Mayor Ed Koch of New York City.

Sadly, a man with whom she was romantically involved became embroiled in a business ethics scandal that swept her in, and she was later caught in a shoplifting attempt in Manhattan. She then reverted to her more natural introverted lifestyle and essentially disappeared from public view in the last period of her life. Measured against a lifetime of role modeling, generosity and passionate support of Israel and her fellow Jews in America and around the world, Myerson’s later setbacks in no way canceled out her accomplishments.

Rest in peace, Bess Myerson, and may your memory always be for a blessing.