The non-misogynist, non-hypocritical case for Jewish continuity. With music. 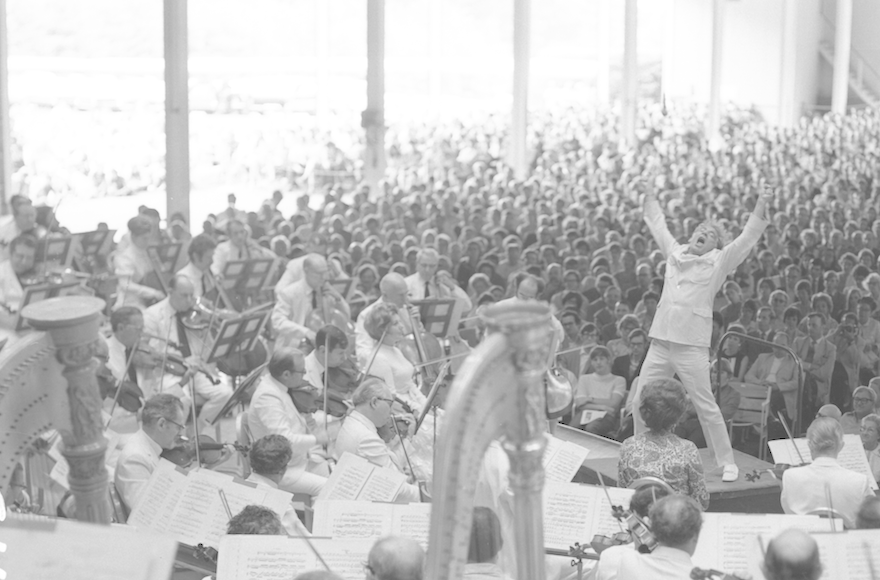 Andrew Silow-Carroll
(JTA) — This is Leonard Bernstein’s centennial summer, and the Tanglewood Music Center in the Berkshires is staging a series of outdoor performances to celebrate its favorite son. I’m not saying that everyone who goes to Tanglewood is Jewish, although I always think a typical evening there is what the High Holidays would look like if the Israelites had enjoyed picnics and white wine.

Last month I had lawn tickets when the Boston Symphony performed Bernstein’s score of “West Side Story” live while the film was shown on large screens. The effect was sort of magical and almost distracted me from my usual activity, which is basically contemplating the fate of the Jewish people. I say almost because there’s an unmistakable gap between the message of the musical about forbidden love and the normative — or should I say, once normative — Jewish preference for Jews marrying other Jews. I’ve joked before that American Jews are the only group that roots against Romeo and Juliet getting together.

This was just a few days after The New York Jewish Week reported on sexual misconduct allegations against the influential Jewish sociologist Steven M. Cohen. Cohen’s persistent question has been how many Jews are doing Jewish. He studied the impact of interfaith marriage on Jewish continuity and vitality, and became associated with a camp of social scientists who believe that intermarriage, late marriage and lifelong singlehood hold “disturbing consequences for Jewish community.” A generation of Jewish communal professionals was galvanized by studies showing the ways that Jewish connections and behavior diminish among the children and grandchildren of intermarriage.

Cohen has already stepped down from some of his key roles and been removed from some others. Longtime critics of his research and advocacy are already stepping into the breach: The Forward published two op-eds decrying Cohen’s emphasis on fertility and statistics; three female scholars accused him and the Jewish communal establishment of making “patriarchal, misogynistic, and anachronist assumptions about what is good for the Jews.”

Cohen and his colleagues in Jewish sociology have made mistakes. As Jane Eisen at the Forward pointed out, Cohen had license, perhaps unusual for a social scientist, to be an advocate for specific policies. In championing traditional modes of Jewish engagement — synagogue attendance, attachment to Israel, a sense of peoplehood — he and his colleagues could appear dismissive of new ways that Jews were experiencing their Jewishness. Sometimes they shifted blame, intentionally or not, onto women and the choices they make about career, marriage and childbearing.

That’s the feminist critique of the communal obsession with “continuity.” More familiar is the cultural critique, which you are less likely to find in academic journals than in the Wedding section of The New York Times. Jewish kids marry kids of other faiths because Americans marry Americans. The idea that you should “stick to your own kind,” as Anita spits at Maria, goes against a liberal grain that embraces multiculturalism, diversity and tolerance. Tribalism is the enemy.

That was Michael Chabon’s point in a speech he gave this year at Hebrew Union College in Los Angeles. The novelist called Jewish-Jewish marriage a “ghetto of two,” which he further likened to “a gated community, a restricted country club” and the heavily guarded Jewish enclave of Hebron.

“I am for mongrels and hybrids and creoles, for syncretism and confluence, for jazz and Afrobeat and Thai surf music, for integrated neighborhoods and open borders and the preposterous history of Barack Obama,” Chabon whitmanized in defense of intermarriage. “I am for the hodgepodge cuisines of seaports and crossroads, for sampling and mashups, pastiche and collage.”

But where I usually agreed with Cohen and his school of sociology was when, responding to declining Jewish numbers and engagement, they would champion Jewish literacy and distinctiveness. The goal was not to shame people into sticking with the tribe but to identify and promote what it is about Jewish life that is worth preserving in the first place: a textual inheritance; a particular moral and ethical language; a series of distinct and meaningful rituals; a living awareness of a Jewish past, in all its glories and horrors; a profound sense of connection with people who share that story.

That’s not tribalism; that’s not Bubbe saying she’ll sit shiva if you marry out. That’s a deep kind of cultural engagement that even Chabon should appreciate. And if the Jewish world created too few places that promote that affirmative vision of Jewish continuity, that’s not the researchers’ fault.

But those who are committed to this kind of Jewish continuity face a dilemma. It is what Ross Douthat, writing Sunday in The New York Times, calls “liberalism without/conservatism within.” Liberal Jews are prone to embrace a world with fewer borders, more diversity, the whole Maria-and-Tony thing. At the same time, the Jewish community maintains “a certain conservatism about its own patterns of marrying and begetting and cultural transmission (and, in the case of Israel, the safety of its lonely nation-state).”

Does that make many of us hypocrites? I suppose. But it is hypocrisy with a purpose. Yes, “West Side Story” is itself collage: of classical music and jazz, ballet and modern dance, Shakespeare and New York slang. It was originally conceived in fact as a clash not between “Americans” and “Puerto Ricans,” but Jews and Catholics. It’s creators — four gay Jewish men — were at least doubly outsiders. But like a lot of American hybrids, it wouldn’t have come about at all without something distinctive in the upbringings of its creators.

Chabon wants “syncretism” without explaining where the distinctiveness of the ingredients comes from in the first place. There’s no Afrobeat without the West African musical traditions out of which it grew. Collages would be pretty bland unless the elements were distinct in one way or the other.

I’d flip it around on Chabon. If there was a small, distinct indigenous culture and its millennia-old folkways were about to be swept away by a tide of colonialism or cultural appropriation, would he celebrate that as “syncretism and confluence”? His call for an open-source Judaism suggests that tradition has run its course, and deserves to subsumed by the mainstream. There are many, many Jews, however, including Jewish liberals, who see themselves as that besieged indigenous culture. And they are willing to fight to preserve it — not as a museum piece but a living, breathing, ever-growing thing.

Andrew Silow-Carroll is Editor-in-Chief of JTA.