The emotional toll of fallen headstones 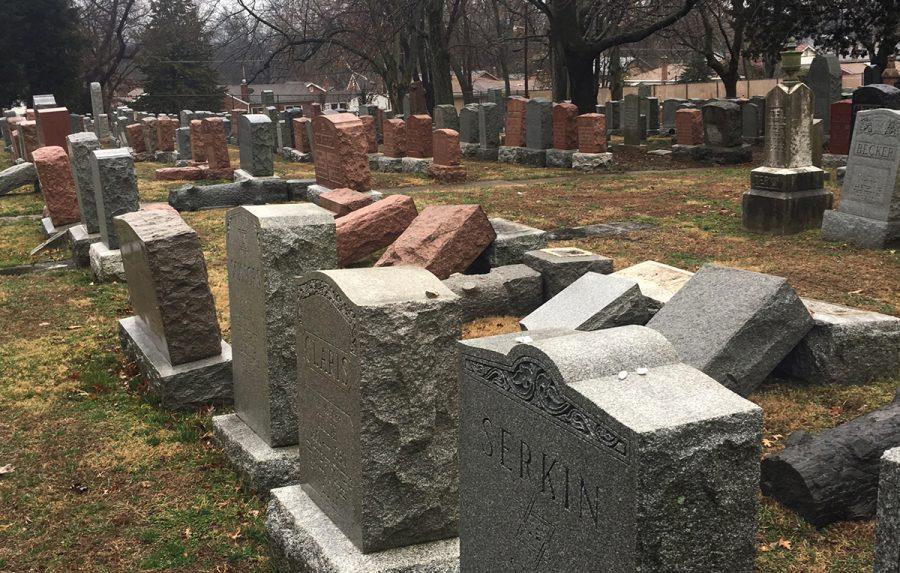 Eric Mink photo of the headstone on the grave of his great-grandmother, Sarah Serkin.

I think it was the violence that got to me, the sudden consciousness that a rampage of deliberate violence had taken place sometime in the past three days on the ground where I now walked. It had left its mark in plain sight.

I actually staggered − just a little, just for a second — when I saw the first group of fallen tombstones. I had to steady myself against a monument close to me, one that had not been attacked, that was not among the 154 pushed, pulled, kicked, rocked, shouldered or dragged to the ground, that was not one of the 16 damaged so badly they require repair or replacement.

When staff workers arrived Monday morning (Feb. 20) at Chesed Shel Emeth Cemetery, a place where people pray that the dead may rest in peace, they found the aftermath of violence. It had not been there when they left at 4 p.m. the Friday before.

The cemetery stayed closed Monday so officers with the University City Police Department’s Bureau of Investigation could survey the crime scene and gather evidence. A helicopter for KTVI-TV (Channel 2) flew over in the afternoon and broadcast images from above, but the pictures, startling as they were, lacked depth, perspective and impact. None of those qualities was lacking at ground level Tuesday morning.

I met my sister at Chesed Shel Emeth an hour or so after it opened. It was the first of my four visits that week. Like most of the other people we encountered, our primary mission was to see if violence had been done to the burial sites of relatives. Our mom and dad, two of four grandparents, two of eight great-grandparents and many aunts, uncles and cousins are buried there. The cemetery is barely a mile from our childhood home and only half that distance from where we went to high school.

The headstone that had been in the most jeopardy was that of our great-grandmother Sarah Serkin (1865-1931). Although it was not disturbed, it was immediately adjacent to at least 10 toppled stones and close to many more. It could only have escaped damage by chance. The stones on the graves of our other family members, most located far from the main attack area, were spared as well.

But the other formidable granite slabs strewn on the ground and the knowledge that a violent attack had put them there tempered our personal relief. It was impossible to not feel connected with the families whose relatives’ stones had been so crudely assaulted.

With our familial mission fulfilled, I left my sister, who had been joined by one of her sons, and went to a place I’d been before near the cemetery’s eastern boundary. It’s an expanse of lawn with widely scattered grave makers close to the ground and fragile looking headstones, many of which were maybe 2 inches thick, 15 or so inches wide and I’d guess no more than 30 inches tall.

They are the graves of children. The ones I saw were for infants, toddlers and preteens who died at ages ranging from 3 months to 13 years.

Some of the words carved into these stones speak of “Our little boy,” “Beloved sister” and “Our brother.” The stone of one girl, dead at age 3, reads, “Loved and sadly missed by your family.” “Darling daughter” died in the spring of 1914, eight days shy of completing her third month on Earth. The family of a 13-month-old boy who succumbed in the fall of 1926 to who knows what tragedy had the headstone marked with a tender message — “To our own brave buddy” — and concluded with the promise, “Until we meet again, brave son.”

More than a few of the children’s stones were broken, but their exposed edges were well weathered, and the fractures might have resulted from natural causes. In a couple of instances, though, the breaks looked more recent. As recent as the weekend of Feb. 18? I don’t know. But a person doing violence in a cemetery and wearing decent boots would have had no trouble shattering one of these tombstones.

Troubled by that mental image, I left the field of children’s graves and started looking for my sister and nephew among a crowd that had grown considerably larger since we arrived.

From 30 or 40 feet away, I noticed a woman walking in my direction. We happened to make eye contact and kept walking until we were standing together. I hadn’t been aware of deep sadness in my face, but she apparently detected it even at a distance, just as I had sensed something similar in hers.

Without a word, she opened her arms, and we embraced. Several seconds later, we stepped back and asked about the headstones of our respective loved ones. I told her mine were OK; she said she hadn’t found the ones she was looking for yet. And then we parted, strangers then and still who had paused to comfort each other.

What happened in that moment did not seem to me to be a “random act of kindness.” Our presence at Chesed Shel Emeth and our wounded emotional states were not at all random but the direct result of violence inflicted on the cemetery in the days prior. We simply extended kindness and compassion to each other, people who seemed to need it for reasons that we understood without explanation.

The subsequent outpouring of human decency from the people, institutions and diverse religious denominations of St. Louis and the respectful visits by Vice President Mike Pence and Missouri Gov. Eric Greitens were heartening. But they could not completely erase the impact of the violence that took place at Chesed Shel Emeth. Nor could humanity’s nobler impulses prevent similar violence a week later at the Mount  Carmel Cemetery in Philadelphia; an earlier attack at the Catholic Holy Redeemer Cemetery close to Mount Carmel; two arson-caused fires at Islamic mosques in different Florida cities in the past six months; or 89 bomb threats made in five waves against 72 Jewish institutions and Jewish Community Centers, including both facilities in St. Louis County, over the past two months.

I don’t know if the violence done under cover of darkness at Chesed Shel Emeth meets the legal definition of “hate crime.” But whatever the motives of those who did these things, I know that love, understanding, compassion or even mere tolerance of Jews and Judaism were not among them.

Nor do I know if the people who assaulted the cemetery are aligned with the extremist, white-supremacist, religious/ethnic bigots who felt legitimized and empowered by the election of Donald Trump and who are part of his base of support.

In his address to Congress on Tuesday, President Trump referenced the Jewish cemeteries and bomb threats and spoke of the nation’s unity in condemning “hate and evil.” But just hours earlier, Trump suggested in a meeting with state attorneys general − without a shred of proof − that the anti-Jewish actions could be the work of his political opponents who were trying to trick the public into blaming Trump supporters for them.

During the presidential campaign, the transition period, the inauguration and the first six weeks of his presidency, Trump has had multiple opportunities to explicitly reject the anti-American ideologies of these extremist groups and the support of their followers. I know that he has failed to do either.