The Catskills meet Mount Sinai at a night of Jewish comedy 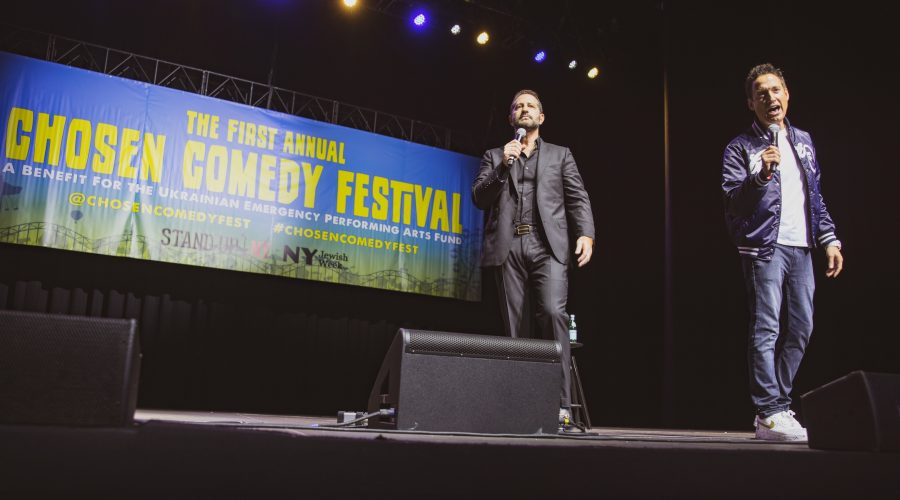 (JTA) — Back in 2000, Spike Lee made a concert film starring four of the most popular Black comics of the day: Steve Harvey, D.L. Hughley, Cedric The Entertainer and the late great Bernie Mac. “The Original Kings of Comedy” was a revelation for this white suburbanite for how deeply it dug into Black culture.

“Kings of Comedy,” filmed in front of largely Black crowds, was less a comedy show than a communion. Audience members appeared to connect almost ecstatically as the comedians riffed on Black family, the differences between whites and Blacks and the inferiority of rap to old-school funk.

Like “Def Comedy Jam,” the HBO series showcasing Black comedians, Lee’s movie proved, as one critic put it, that “there’s a large, appreciative audience for black comedy that makes no attempt to reach white audiences.”

I remember thinking what it would be like were Jewish comedians to connect with Jewish audiences in a similarly familial way. I was too young to have experienced the Catskills, when Jewish comics shpritzed and Jewish audiences convulsed. By 2000, of course, Jewish comics were doing just fine in the mainstream, but with material that was more Jew-ish than Jewish-Jewish. I wondered, in a post-ethnic, post-denominational, post-everything world, would we ever again see Jewish comics performing knowing, insidery, counterculture Jewish jokes — about synagogue, about Israel, about theology, even — for a large, appreciative audience of Jews?

It took 22 years: On Tuesday night, Stand Up NY staged at the Coney Island Amphitheater. A dozen or so comics, nearly all Jewish, performed for an audience of about 4,000 people. Many of their routines drew from the well of classic ethnic Jewish comedy, mining cliches about smothering moms, indigestion and Jews who prefer a good sandwich to good sex. Jessica Kirson had a strong set about Florida retirees. The veterans Jeff Ross and Dave Attell, who closed the show, mostly stayed in the comfort zone of familiar, although still funny, cliches: Jews and money, mah jongg and heart medication. Alex Edelman, whose one-man show “Just for Us” is a master class in making the parochial universal, touched briefly on his Jewish day school upbringing before moving into secular territory.

But more than a few of the performers joked about Jewish folkways that may well be invisible to the mainstream. And when they did, and the audience roared in recognition, it reminded me of what critic Elvis Mitchell, who is Black, wrote about “Kings of Comedy”: “[F]or those who have grown up living what these comics talk about, this is a chance to see a part of their lives exhibited in the mainstream and in the context of a community of like-minded folks.”

The comics Elon Gold and Modi emceed the festival, and together and separately went about as deep as you could go into the mindset of engaged Jews like me without speaking Yiddish or Hebrew (although they each sprinkled in a bit of both). They even punned in Hebrew when joking about the Israeli Jew’s tendency to exaggerate (“You knew Ben-Gurion? I knew his father, Gurion”). Gold also talked about Jews and food, but did it in a way that connected to the Exodus, Passover and the Jews receiving manna in the desert — Jerry Seinfeld meets Rabbi Jonathan Sacks. The Catskill Mountains meet Mount Sinai.

Modi — born in Israel, raised on Long Island, educated at Yeshiva University ­— killed with a set about the differences between Sephardi and Ashkenazi Jews, down to the Hebrew phrases they prefer. His accents and insights were exacting and extremely particular. (One bewildered  audience member turned to us and whispered, “What’s ‘shkoyakh’?” If you don’t know either, well, you get my point.) And like the best comedians, Modi is also a sociologist: His YouTube videos could serve as a primer on the diversity of the American Jewish community.

That diversity was also celebrated from the stage (although there could have been more women comics than the three — Kirson, Leah Forster and the Indian-American comic Zarna — who performed). There were shout-outs to the Russian-speaking Jews who had only to walk down the boardwalk for the show; to the Israelis in the audience; to the Modern Orthodox Jews who seem to have come out in droves. Forster riffed a bit on what it was like to grow up queer and haredi. Two of the comics spoke of their Russian-speaking immigrant parents.

Not since the last AIPAC convention has a Jewish event of this size featured such a cross-section of American Jewry.

Gold, who organized the event with Modi and Stand Up NY owner Dani Zoldan, seemed to revel in the difference between mainstream, assimilated Jewish comedy and the particularist stuff that he, Modi and a few others performed. He even imagined what a famous, and famously assimilated, Jewish comedian like Rodney Dangerfield might have sounded like were he religious: “We were so poor, forget about a lulav and an etrog. My father gave me a tennis ball and a stick and said, ‘Hey kid, shake that.’”

Gold also does an impressive Jackie Mason imitation, which made me think about Mason’s 1980s Broadway comeback. An older generation rediscovered Mason during that run, and a younger generation got a taste of the intensely ethnic Jewish humor that gave the Borscht Belt its nickname. And yet, I have read the studies showing how the majority of Jews are growing less religious, less ethnic and more assimilated, and how a minority is doubling down on religion and becoming more insular. Until Tuesday, Mason’s late-career success seemed to me to be the last gasp of a common Jewish-Jewish comedy culture. (At one point Gold asked younger members of the audience, “Do you know what the Catskills are?”)

That isn’t to say that the Jewish community isn’t fractured between the Jewish “nones” and the religious “maximalists,” and countless variations in between. Rather, the Chosen Comedy Festival, for at least one night, seemed to bridge those gaps. It found the funny in the cliches that have become their own comedy traditions, and in the traditions that have become fodder for fresh, new jokes, all for a community of like-minded folks.

—
The post The Catskills meet Mount Sinai at a night of Jewish comedy appeared first on Jewish Telegraphic Agency.