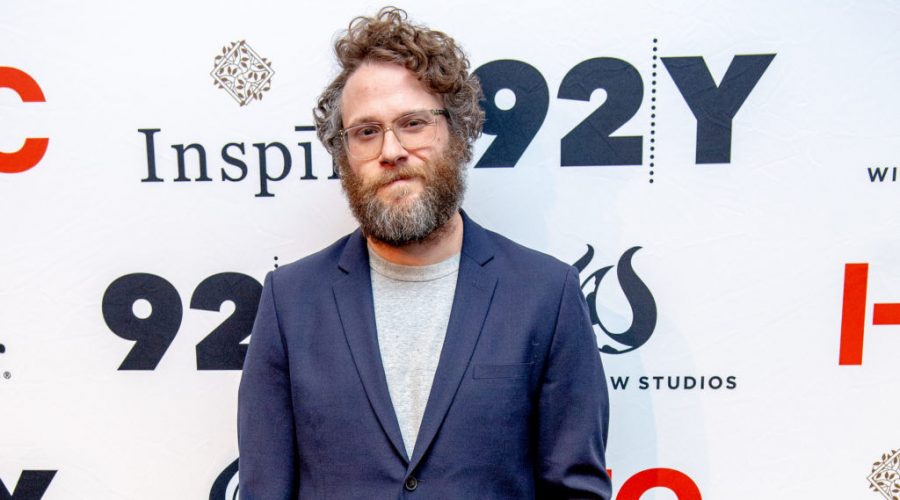 Chances are pretty good you’ve run across Seth Rogen lately, the actor-producer-writer-comedian and budding director associated in various capacities with “Superbad,” “Knocked Up,” “Pineapple Express,” “Steve Jobs,” “The Interview” and many more movie and television projects.

To take just a few high profile examples, you might have seen him on ABC’s late-night “Jimmy Kimmel Live!” in early March, read about him in a 7,800-word, mid-April piece in the New York Times Magazine and heard him last week in a 44-minute interview on NPR’s “Fresh Air” with host Terry Gross.

Rogen’s been making the media rounds mainly to promote his first book, “Yearbook,” a collection of autobiographical essays. His efforts have succeeded. Published on May 11, “Yearbook” debuted at No. 2 on two New York Times best-seller lists: hardcover non-fiction and combined print and E-book non-fiction.

I should be clear: This is not a book review. Nor is it a re-hash of Rogen’s stunningly poor judgment last summer in attempting to use humorous language and concepts on a podcast to convey his serious concerns about the longstanding unresolved disputes between Israel and Palestinians. The controversy his remarks provoked was covered exhaustively at the time.

Rather, this column is more of a reflection on a reflection. It grew out of a lengthy excerpt I read in a recent issue of The New Yorker of a chapter from Rogen’s “Yearbook.” The chapter is basically a comedic tutorial on the bar/bat-mitzvahs of his youth in Vancouver, British Columbia. It’s a remembrance and rumination by the 39-year-old Jewish man Rogen is, who manages to embody in his writing the sensibilities of the 12- to 13-year-old Jewish boy he was when he and his Jewish classmates were being bar/bat-mitzvahed in the mid-1990s.

The excerpt’s mostly funny, casually profane and occasionally touching. Rogen’s clearly in touch with his inner pre-teen. What struck me more than any of that, though, was how disconnected his descriptions feel compared to my memories of that same fraught period of life, even allowing for the exaggerations and embellishments of comedy.

In fairness, I should acknowledge that mine are the remembrances, ruminations and reactions of the 73-year-old Jewish man I am, not the sensibilities of the 13-year-old Jewish boy I was at my bar-mitzvah in 1960.

But like Rogen in 1995, I and the other 12- and 13-year-old boys in our bunch of buddies growing up in University City were similarly afflicted with rampant insecurities, cluelessness and self-consciousness. I just prayed I’d get through the period without too much psychic damage.

And while Rogen and I (and many millions of others, Jewish and non-Jewish) may share those bigger-picture factors, his essay suggests few other parallels:

For instance, he bemoans having to attend special bar-mitzvah classes but adds that with 60 other kids in the class with him, the resulting year’s worth of bar/bat-mitzvah parties helped compensate for the inconvenience.

Rogen doesn’t mention that he already was attending Talmud Torah Elementary School (in Vancouver, British Columbia, where he grew up) for regular and religious instruction through eighth grade. That made scheduling and attending bar-mitzvah classes a lot simpler.

In contrast, my friends and I attended U. City’s Hanley Junior High (long since torn down) for seventh, eighth and ninth grades, which meant I spent a couple of years putting in a full day at public school, followed on four of the five weekdays by Hebrew school, including bar-mitzvah instruction, at Tpheris Israel Congregation, the Orthodox shul where our family belonged. And Rogen’s the one who’s kvetching?

Rogen also cites bar-mitzvah gifts, many of them cash, as a positive mitigating factor in the process, as well they were. But he says, “A good haul could be worth several thousand dollars.” Maybe in Canadian dollars. But in American money in our U. City circles, totals for bar-mitzvah “hauls” were a tiny fraction of such sums.

The most I could hope for was maybe a few hundred bucks that would let me fulfill my dream of buying a set of drums. Then I’d be able to stop smacking drumsticks on living room furniture as I tried to pick up drum patterns in the soul and jazz tunes I played on my parents’ stereo. With a drum set of my own, I could continue teaching myself to play, but do it on an actual musical instrument without upholstery.

Rogen’s essay devotes considerable space to irresistible and/or outrageous accounts of 8th-grade boys and girls at bar/bat-mitzvah parties navigating the forces of attraction to and repulsion from each other and indulging their DNA-dictated fascination with raunchy talk and reckless conduct.

Rogen writes that his principal focus at the parties was to somehow acquire a girlfriend, a goal he pursued primarily through dancing.

But not fast-dancing. He and his male friends only did that in joking ways with each other to hide their incompetence at it. Slow-dancing, with its potential for intense body contact, was the preferred approach for thrills and for testing more serious pairing-up possibilities.

This was much different from what happened at U. City parties, whether the bar/bat-mitzvah variety or others. Oh, the allure of slow songs was pretty much the same, although the larger the party, the subtler any “moves” had to be.

But among my friends and acquaintances at that age and older, the ability of both girls and boys to fast-dance to songs with great beats was a point of personal pride that earned the admiration of one’s pals. The jokey, inept approach of Rogen and his boy buddies would have been completely out of place during upbeat tunes on our dance floor.

Comedy notwithstanding, Rogen’s essay is most disappointing in finding nothing of inherent value — other than the parties and gifts — even worth mentioning in connection with the difficult challenges of the bar/bat-mitzvah ritual.

With a nod to Rogen the filmmaker, I thought about a quote I use in the film course I teach at Webster University. It’s something writer-director Francis Ford Coppola said (“The Godfather,” “The Godfather, Part II,” “One From the Heart”) about the massive challenges he faced making “Apocalypse Now,” which was released in 1979. He was 40 years old.

“Young filmmakers often don’t understand what they’re really attempting,” Coppola said. “If they could, they would not even try because they would realize it was impossible. When I went to make ‘Apocalypse Now,’ I somehow didn’t feel that it would be impossible to do…. Sometimes, that’s a beautiful thing, when you attempt something that’s out of your reach, and you do it anyway.”

If I’d understood at age 12 just how impossible a task a bar-mitzvah would be for me — to study, learn, practice, rehearse and perform at an acceptable level of quality in song and speech in Hebrew and English — I never would have attempted it.

But after attempting and doing it anyway, I understood from personal experience that people sometimes are capable of more than they think they are. It was the valuable truth my bar-mitzvah revealed to me about myself and my fellow humans.

And I still have those drums.

Eric Mink is a freelance writer and editor and teaches film studies at Webster University. He is a former columnist for the St. Louis Post-Dispatch and the Daily News in New York. Contact him at [email protected]