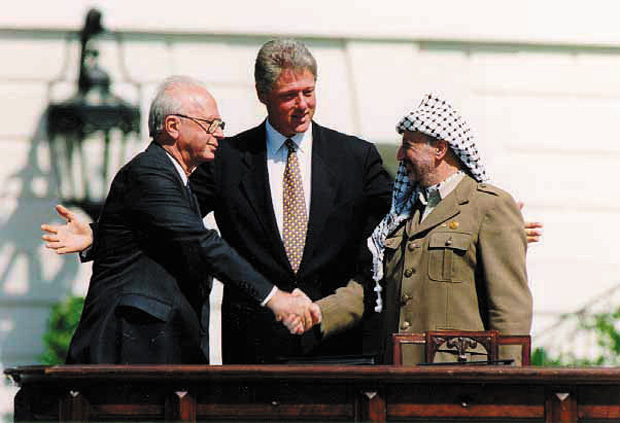 Yitzhak Rabin, Bill Clinton, and Yasser Arafat at the signing of the Oslo Accords on Sept. 13, 1993.

Like most Israelis, I am an eternal optimist. Living day to day in our neighborhood and faced with continued threats to our legitimacy and even our existence, what choice do we have? That being said, I am extremely pessimistic about the latest round of peace talks that have been initiated in Washington, DC. There is no shortage of reasons why I should be skeptical, but what worries me most are the personalities involved in these talks and the faulty premises they represent.

Almost 20 years after the late Prime Minister Yitzhak Rabin attempted to conjure arch-terrorist Yasser Arafat into a worthy partner for peace, it seems that we have not learned the necessary lessons from the past. As the “peace process” continued to hit bumps along the way, Israel and our American allies attempted many different variations which all led to the same failed result. We initiated staged withdrawals and implemented unilateral disengagements. At times we included the Europeans and our Arab neighbors in the process, while at key points we negotiated secretly without any third party involvement. The European Union was used to monitor border crossings, and donor countries were asked to invest in an “economic peace.” Let us be brutally frank: None of this worked in changing the dynamics of the conflict or convincing the Palestinians to completely abandon hatred and violence and recognize that the Jewish State is here to stay.

Perhaps the problem with Israeli-Palestinian conflict negotiations lies not with the process, but with the people involved in representing the parties at the table. In most professions, when one fails at his job and leaves the project in question in chaos and complete disarray, he is most definitely not asked to keep working on the task at hand. Again and again and again. In fact, he is usually fired. Not so when it comes to the “peace process industry.”

Saeb Erekat is the main representative for the Palestinian delegation. He has held this position in one form or another since 1991. Despite the hours logged with his Israeli counterparts, and the countless interviews he has granted to Western media sources where he extols peace and reconciliation, Erekat has not brought the Palestinians even one inch closer to peaceful existence with Israel. More troubling, it is clear that he never really revised his radical views about the Jewish State. During the Second Intifada, Erekat appeared on live international television to accuse Israel of massacring 500 Palestinians in Jenin while completely ignoring the facts showing that one-tenth of that number had been killed and most of those were armed terrorists. Further, as recently as 2007, Erekat is belligerently on record as denying the possibility of the Palestinians ever recognizing Israel’s existence as a Jewish state.

Representing the United States at the latest round of talks is former ambassador Martin Indyk. Like Erekat, Indyk has also been a major player in the peace industry since the early 1990s, and he also can point to zero achievements in bringing peace and prosperity to our region. On the contrary, when Indyk served as the American ambassador to Israel during Prime Minister Netanyahu’s first term, he was known for his disparaging attitude towards the democratically elected government of Israel. Since leaving public office, Indyk has publicly revealed his true political leanings. Until his recent appointment by Secretary of State John Kerry, Indyk chaired the International Council of the New Israel Fund (NIF). Over the past few years, NIF has become notorious for refusing to stop funding groups that call for a BDS (boycott, divestment, sanctions) campaign against Israel and for actively aiding organizations that provided false details to the Goldstone Commission.

Finally, we are left with the chief negotiator on behalf of the State of Israel. Compared to Erekat and Indyk, Justice Minister Tzipi Livni is a relative newcomer to peace negotiations. Nevertheless, she too has endured countless hours of negotiating with the Palestinians. Most troubling, her views do not represent a majority of the current government, and are most definitely at odds with the average Likud voter, not to mention the Israeli public, which sharply spurned her in the recent elections. While serving under Prime Minister Ehud Olmert, Livni offered the Palestinians more than 95 percent of the historic Jewish heartland of Judea and Samaria and the unprecedented division of Jerusalem—an offer that was ultimately rejected by Palestinian Authority President Mahmoud Abbas and Erekat. It is a fair assumption that she will try to up her offer in the latest round of talks to succeed where she abjectly failed to surrender in the past.

As a father of three small children, there is nothing I want more than to believe that the latest round of talks will lead to true and lasting peace in Israel. On the other hand, we all know that the definition of insanity is the endless repetition of the same experiment in the hope of obtaining a different result. If this is the case, I call on all sides to end the insanity and appoint negotiators who have not failed us all in the past and who truly represent the best interests of the people they aspire to represent in this area.