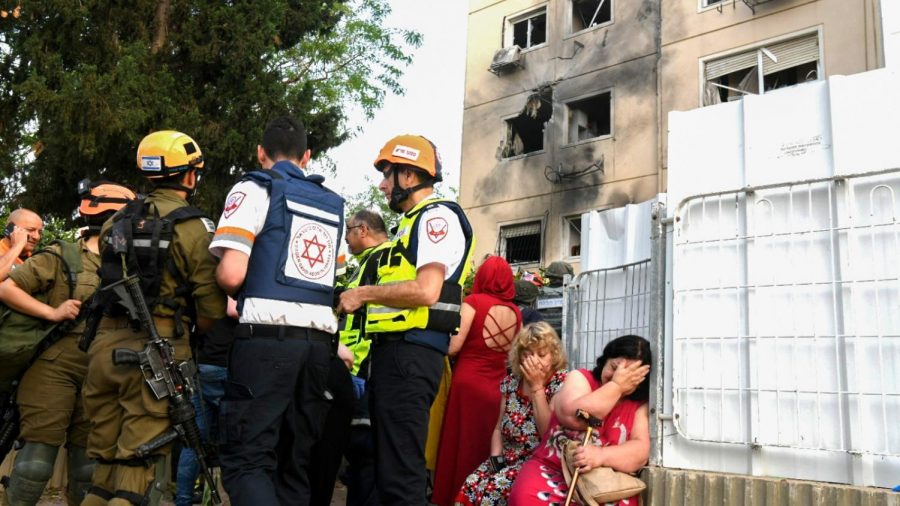 The scene outside an Ashkelon apartment building hit by a rocket fired from the Gaza Strip on May 11, 2021. Photo by Flash90

To paraphrase Dickens’ famous description of Paris in “A Tale of Two Cities,” the situation in the Middle East is indeed “the worst of times,” and there is no counterbalancing “best” scenario in sight.

Indeed, Israel is simultaneously dealing with an intifada in Jerusalem at the site of the Western Wall and Islam’s Al-Aqsa Mosque and a rapidly escalating rocket exchange between Israel Defense Forces and Hamas and Islamic Jihad terrorists who have directly attacked Tel Aviv, Israel’s second largest city. Hamas and Islamic Jihad also have rained down death and destruction on Israeli border towns such as Ashkelon.

Israel has not faced such a devastating multifront war since the 1973 Yom Kippur War.

If all of the above were not enough to worry about, there is the harsh reality that Hamas is fully supported by the rabidly anti-Israel regime in Iran. Described by our State Department as the No. 1 state sponsor of terrorism, Iran reportedly provides $20 million a month to Hamas and supports its Lebanese proxy, Hezbollah, which has thousands of rockets and missiles pointed at Israel. Iran also has enriched its uranium to 60%, which is close to weapons grade.

Iran must be put on notice that the United States will not renew its nuclear deal talks until Iran stops its support of Hamas – full stop.

Israeli Prime Minister Benjamin Netanyahu and his erstwhile political rival, Defense Minister Benny Gantz, have set aside their political differences to warn Hamas and its terrorist allies that they “will pay a heavy price” for their attacks. About 5,000 IDF troops have been mobilized to be launched into a ground invasion of Gaza if conditions warrant.

U.S. Secretary of State Tony Blinken, to his credit, has said Israel has the “right to defend itself” while urging both sides to de-escalate the conflict.  Later, State Department spokesman Ned Price condemned Hamas for its “unacceptable” escalation of the conflict.”

At this writing, the conflict continues to escalate with no apparent off-ramp in sight. A cease-fire and urgent negotiations are needed to prevent a calamity. In the meantime, we must support Israel’s right to defend itself and pray for the peace of Jerusalem.

Robert A. Cohn is editor-in-chief emeritus of the St. Louis Jewish Light.