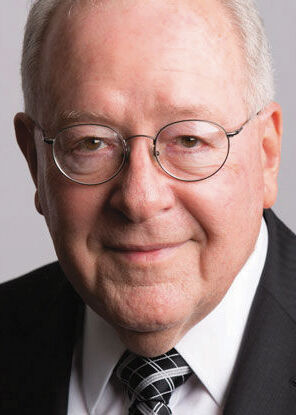 During a recent meeting of the rabbis of St. Louis with Jewish Federation of St. Louis President and CEO Brian Herstig, a colleague expressed our collective sadness at not being able to attend a funeral for our friend Rabbi Joseph Rosenbloom, who passed away at the age of 91 on Aug. 3. As a result, some of our rabbis decided to share their memories of this very special colleague in this essay.

Rabbi Elizabeth Hersh, his successor at Temple Emanuel, shared many recollections in her eulogy for him. “He touched countless lives over the generations of families.  And he could recall every lifecycle event and story,” she said.  “His memory was impeccable.  He traveled far and near to stand under your chuppah.  He was your family rabbi.  He has been a faithful servant (in his words) of all people.  He was a tzaddik, a righteous soul.  He had the ability to stand quietly in the presence of others.  He was beloved.  He was a true giant.  My friend; my rabbi.”

Hersh remembered him as a wonderful mentor. She called Temple Emanuel his life’s dream and recalled his close relationship with so many congregants and friends. He was proud of his academic record, publishing three books and teaching for decades at Washington University. He was a “rabbi’s rabbi,” so well respected by colleagues near and far. But he was most of all a beloved friend who “walked with us through many moments of our lives, both happy and sad,” she added.

Hersh ended her eulogy with the words, “We are all fortunate to have been recipients of his teaching, friendship and pastoral guidance.”

Rosenbloom was President of the Rabbinical Association when I arrived as assistant rabbi of Congregation Shaare Emeth in 1965. He called to welcome me and asked me to join St. Louis Mayor Alfonso Cervantes’ Civil Rights Commission. I asked whether one of the senior rabbis might wish to do this. He said, “They have enough to do. This will be good for you and help you to know some of the other religious leaders.”

He had faith in a young rabbi. We had a special bond because he had served as assistant rabbi of Shaare Emeth from 1954 to 1955. Just after ordination, he met with Shaare Emeth Rabbi Julius Gordon for little more than an hour. Then the Gordon family left on vacation and Gordon suddenly died.

Rosenbloom served the congregation so well during that difficult time that some of the leaders asked whether he wanted to be considered for the position of senior rabbi. He demurred, saying that he was too new, just out of school and not ready. He amazingly helped to keep the congregation on a steady course until a new rabbi was engaged. I found this fact in the board minutes of 1954-55. When I asked him whether he was sorry he didn’t take the job, he answered, “Look at the amazing life I have lived – wonderful family, wonderful congregation, wonderful life. I don’t regret a thing.” Despite the losses that came to him, he was always optimistic.

Before joining Central Reform Congregation as its senior rabbi in the mid-1980s, Rabbi Susan Talve served at Shaare Emeth. “When I found out that I was pregnant with our second child (and) the first just a year old, Rabbi Joe took me out to lunch,” Talve recalled.  “He knew that we were going to leave Shaare Emeth and he asked me if I had any plans.  I told him that I could not imagine continuing to be a congregational rabbi and a mother.

“At that moment he looked straight into my eyes and told me that he would make a job for me that would let me be anything and everything I wanted to be.  He reminded me that he was a father to daughters and that he was committed to making sure that he would do anything to support the dreams and goals of women, especially in the workplace.

“Rabbi Joe also modeled a most generous and non-competitive spirit.  He helped CRC form in our early days and made sure that we would learn from both the strengths and mistakes of his experience.  This community is better for his presence here for so many years.”

Rabbi Jim Goodman of CRC also shared an early memory. “Rose Mass, of blessed memory, and I started an effort called SLICHA, St. Louis Information Committee and Hotline on Addiction, when I came to town in 1981. There were [only] a few in leadership who offered to help us in such efforts. One was Bill Kahn, of blessed memory, who gave us a room in the Covenant House complex. Rose and I convened a meeting opening the door onto support for alcohol and other forms of substance abuse.

“When we outgrew that space, Joe Rosenbloom stepped up and said, ‘You can meet at our place.’ We started meeting on Thursday nights at Temple Emanuel. ‘Do you need to know any details?’ I asked Joe. ‘No. You can use our building any time’ (he said).

“It was the right thing to do and that was all Joe cared about. Joe was no-nonsense. His attitude: it was right, let’s do it. He was different that way.”

Rabbi Amy Feder of Temple Israel remembered: “Shortly after (husband) Michael and I moved to St. Louis, Rabbi Joe took us out for lunch. His absolute love for the rabbinate was inspirational, especially for two people so fresh out of rabbinical school.  He helped us see the joys that can come from spending your career building a congregation. We frequently look back at that lunch and hope that we have the same energy and passion for this work when we’ve been at it for as long as he was.  He was kind, brilliant, and a true iconoclast.”

Rabbi Howard Kaplansky of United Hebrew Congregation spoke of times shared with Rosenbloom. “Periodically, Joe and I would meet for lunch, which usually included wine, good humor and my learning something valuable from him.  I regarded him as a mentor, teacher and friend. He was without pretense. He always gave me his complete attention when we spoke. Through my conversations with Joe, I felt encouraged to teach and preach with honesty and a respect for the importance of context. After the second glass of wine, lunch was over. I will miss lunch with Joe, my friend and teacher.”

Rabbi Dr. Bill Cutter, a retired professor at the Hebrew Union College – Jewish Institute of Religion, is a St. Louis native who grew up when Rosenbloom was at Shaare Emeth. As a student rabbi, Cutter often drove with other students to visit Rosenbloom in Lexington, Ky., where he worked as a Reform rabbi  and hospital chaplain after leaving Shaare Emeth and before taking the job with Temple Emanuel in 1961.

During their tennis matches, which Rosenbloom usually won handily, Cutter received advice about his studies and concerns about his schooling from the elder rabbi. He wisely told Cutter change is not an easy task.

“I saw him walk into the dining room of a hotel, having finished two sets of tennis and reading a book, and the entire staff bowed slightly toward him,” recalled Cutter. “We all will miss him. I lament that I couldn’t be one of his accompaniers on his final journey. My last word from him was a call. He said, in his distinctive voice, ‘Billy, there’s something I want you to do.’ He was always trying to help someone. I like to think of him in that way.”

In our discussions, the rabbis remembered Rosenbloom’s dedication to scholarship and the many outstanding scholars who Temple Emanuel brought to and shared with the community. We remember his deep love of family and his strength in times of loss and sorrow. He taught each of us how to be better rabbis and human beings.