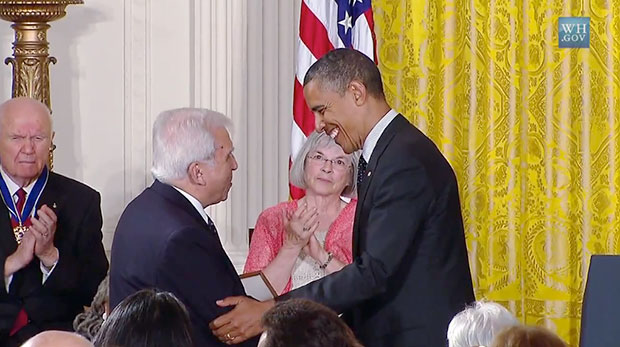 President Obama's use of the term "Polish death camps" during a May29, 2012 ceremony at the White House to honor the late Polish partisanJan Karski caused a stir.

LOS ANGELES — President Barack Obama made a simple and very basic mistake when he spoke of Polish death camps during the presentation of a posthumous Medal of Freedom to Jan Karski, a Polish resistance fighter who was among the first to report German atrocities in his country.

The president spoke during the May 29 ceremony of how the Polish underground “smuggled [Karski] into the Warsaw Ghetto and a Polish death camp to see for himself.”

The next day, after objections from the Polish government, a spokesman for the U.S. National Security Council said the president “misspoke” and meant “Nazi death camps in Poland.”

There were death camps and they were situated in Poland — deliberately so — but there were no Polish death camps. The most accurate way to refer to these camps is “Nazi death camps in German-occupied Poland.”

Let me tell you why: Poland was occupied by Germany. Occupation was an act of state, not of the Nazi Party. So there was no Nazi occupation, no Nazi army, no Nazi laws. There was German occupation, a German army — the Wehrmacht — and German laws. These were instruments of the state.

These mistakes are all too common even in articles written by scholars and historians. For example, the “Encyclopedia of the Holocaust” commonly refers to Nazi occupation. Its editor is a distinguished scholar.

That which was undertaken by the Nazi Party to realize its ideology can be properly referred to as Nazi. Hence the death camps were Nazi in origin, conception and operation, but they were situated in German-occupied Poland, an area known as the General Gouvernment (except for Auschwitz, which was situated in Upper Silesia, and Chlemno located in the Warthegau).

For clarity’s sake, we should specify that Poland itself was divided. Some Western areas were annexed to the Reich, some were occupied by the Reich.

Extermination is a Nazi term; something that is done to vermin and rats, not to people. We should not use Nazi terms, except when we specify that they are Nazi terms.

The Poles are properly sensitive to the common mistake of speaking of Polish death camps. They have labored hard in the post-Communist era to correct this mistake and to change common usage. Their efforts deserve our support. Simply put, they are truthful.

The president’s speech writers ill served him and ill served the late Jan Karski, the man so deserving of the Presidential Medal of Freedom. They should have known better or verified these matters. The president’s mistake is entirely forgivable. I can cite many distinguished scholars who have made the very same mistake.

His correction is equally proper. It might go a long way toward ensuring that this mistake is not repeated.