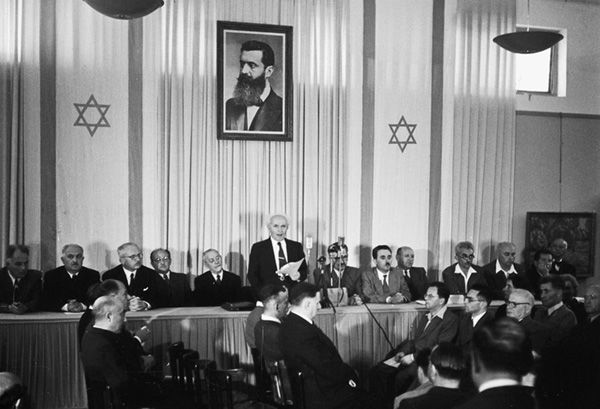 David Ben-Gurion (First Prime Minister of Israel) publicly pronouncing the Declaration of the State of Israel, May 14 1948 in Tel Aviv, beneath a large portrait of Theodor Herzl, founder of modern political Zionism.   Photo: Rudi Weissenstein/Israel Ministry of Foreign Affairs

After two millennia, on May 14, 1948, the re-establishment of an independent Jewish nation in its traditional homeland became an unprecedented historical reality. In the face of belligerent regional and international opposition, the scattered remnants of a devastated post-Holocaust Jewry succeeded miraculously in this modest beginning.

Two milestones in the development of today’s strongest nation and oldest democracy, the United States, were critical “Road Maps” of their day. They set in motion a momentum and direction that affected the development of America for generations to come, and no doubt contributed to making America what she is today.  With the White House asking Israeli Prime Minister Benjamin Netanyahu to “hold off” on settlement construction and the recent hosting of Palestinian leader Mahmoud Abbas, can these historical American Road Maps be instructive to Israel?

An historical milestone need not be a thunderous or grandiloquent event.  But it does need to point the progress of history in a particular direction.  It is, however modest, a first step, an “historical beachhead.” Both the founding of Jamestown and the send-off of the Lewis and Clark Expedition are classic examples.

After months at sea in 1607, about 100 English colonists aboard three tiny ships entered Chesapeake Bay.  There they saw “faire meddowes and goodly tall trees” along the Virginia coast and decided several weeks thereafter to establish a foothold, Jamestown, on the James River, both named in honor of the English king, James I.

But King James had to be very patient indeed before reaping any honor from Jamestown: The site of the colony turned out to be a bad choice, being swampy and having impure drinking water. This, coupled with insufficient preparation for the American winters, and lack of sufficient and wholesome foods, resulted in many of the colonists falling victim to malaria, pneumonia and dysentery in Jamestown’s first years.  If this weren’t enough, drought, Indian attacks, starvation, and lack of strong leadership brought the colony to near abandonment by 1610. After continued trials, the colony met its final demise to fire in 1698, from which time it withered completely.

Yet, Jamestown had served as the historical beachhead for the physical settlement of Virginia and by extension the whole of English North America. As importantly, Jamestown served as a vehicle for the “road-mapping” of democracy.  In 1619 the first legislative assembly in the Western Hemisphere, the Virginia “House of Burgesses,” met. It served as a model for representative democracy that later became the basis for U.S. constitutional government.

With nothing more than a shot fired to mark their send-off from St. Louis in 1804, the 45-man Lewis and Clark Expedition, like Jamestown, had a modest beginning.  Drudgery and hardships marked their journey to the Pacific and back. When they finally reached St. Louis again after over two years, they found they had been given up for lost!

Yet, their journey of exploration gave credence to American claims to the vast territory between the Mississippi River and the Pacific Ocean. As significantly, it cemented a “Manifest Destiny” in the American mind that “from sea to shining sea” is American. It was the first step in the subsequent westward expansion. With little fanfare the Expedition established all-important “direction.”  In this respect, like the founding of Jamestown, it was a milestone, an historical roadmap.

The whole Zionist Enterprise was an attempt to establish a certain “direction,” the return of the Jewish people to their homeland. What national direction will be established if current White House pressures for stifling settlements and adopts Abbas’ desire to truncate Israel to the pre-’67 borders?

Were we to judge from the two American examples, which suggest anything but retreat or self-truncation, the wrong one.

Curiously, both the founding of Jamestown and the launching of the Lewis and Clark Expedition took place on May 14th, Israel’s birthday.