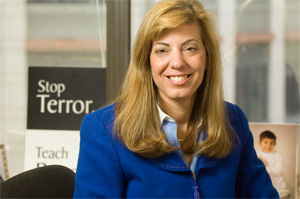 WASHINGTON — With a flurry of diplomatic activity regarding direct Israeli-Palestinian talks, a contingent from The Israel Project (TIP) including pollster Stanley Greenberg met in the West Bank with Palestinian Authority Prime Minister Salam Fayyad and chief Palestinian negotiator Saeb Erekat.

We shared key findings from a poll done for TIP by Greenberg and carried out by Arabs in the West Bank and Gaza. It showed that 69 percent of West Bank residents polled said they believed in a two-state solution. Furthermore, 56 percent said they regretted Yasser Arafat’s failure to accept the peace deal offered by President Clinton at Camp David in 2000.

We also shared a report by Palestinian Media Watch showing that even during proximity talks, Palestinian Authority leaders’ statements, official media, children’s programs and events undermine peace for both sides.

To their own people, in Arabic, the Palestinian Authority, Fatah leaders and official PA media continue to use American tax dollars to deny Israel’s existence and glorify terror.

The responses to these studies and comments by the two key Palestinian leaders were enlightening.

Fayyad, who is highly regarded by many Israeli and American leaders for his commitment to a two-state solution, focus on improving security for both sides and for improving the quality of life of the Palestinian people, seemed pleased by the poll numbers. He indicated that he was disturbed by the report on the culture of hate and went through events in which he was personally involved, giving us his explanations. Fayyad expressed interest in doing things differently in the future.

Fayyad told us he is focusing on how many Palestinians think a two-state solution will actually happen.

“We need to defeat rejectionism,” he told us, by creating facts on the ground that make daily life better under moderate leadership than under Hamas.

In Ramallah we saw examples of these facts: significant new construction, beautiful restaurants and shops, new roads and more. Fayyad spoke excitedly about the restoration and opening of a movie house in Jenin, once a hotbed of Palestinian militancy and now a city where Palestinian security forces are in control and the economy is growing.

Fayyad explained that in his vision of a Palestinian state, Jews and others would be welcome to become citizens and visit holy sites. However, Fayyad is not a part of the negotiating team because he is not a member of the Fatah Party and there is political friction between him and Fatah.

Our TIP contingent then met with Saeb Erekat, who heads the Palestinian negotiating team and is a member of Fatah. We shared the same poll numbers and overall Palestinian Media Watch report with him.

I explained that I had heard personally from Sandy Berger, who was part of President Clinton’s negotiating team, and others that when Arafat was offered a Palestinian state at Camp David and Taba, he refused because he was concerned that his own people would kill him.

Why would official Palestinian media and textbooks create a situation that would put their own leaders in danger for doing what is in their own best interest?

“What can be done to prepare for peace?” I asked Erekat.

His answer: “We will educate for peace when there is peace.”

This is a recipe for disaster.

We saw what happened when Israel withdrew from Gaza with hopes of peace, but Palestinians there had not been prepared for peace. As a result, Hamas took over by a combination of the ballot box and force. Israeli civilians sustained a barrage of thousands of rockets and missiles, and innocent lives on both sides were lost.

The Palestinian Authority has made some progress combating the culture of hate. School textbooks no longer demonize Jews to the same extent. However, they still do not recognize Israel on their maps or pages. Some 12th-grade textbooks devote several pages to extolling “ribat,” which is similar to “jihad,” holy war. More must be done to prepare the Palestinian people for peace and a better future.

Erekat told us that he is concerned about going to negotiations without knowing there will be a successful outcome.

“If we can’t produce the ‘white smoke,’ ” he said, alluding to the process where cardinals pick a pope, “we should not raise expectations.”

World leaders, led by President Obama, must continue to encourage Palestinian leadership to foster a culture of hope, not hate. Only then will there be lasting peace for both Palestinians and Israelis.

Jennifer Laszlo Mizrahi is the founder and president of The Israel Project, a nonprofit educational organization that provides factual information about Israel and the Middle East to media, leaders and the public. It has offices in Washington and Jerusalem.