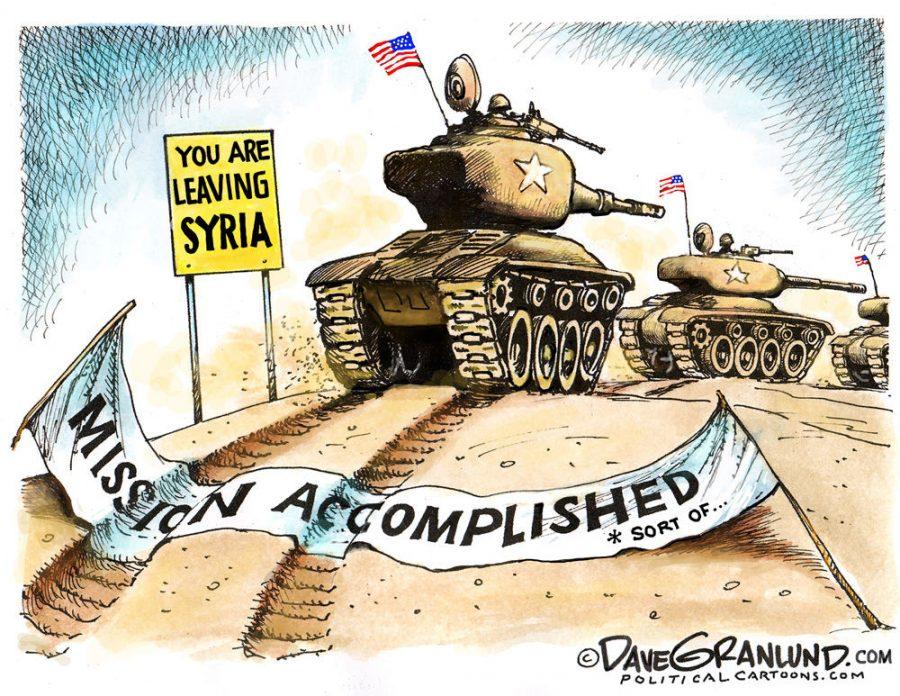 President Donald J. Trump has shot himself in the foot so many times that the soles of his shoes must resemble Swiss cheese.  With his latest decision to pull 2,000 U.S. troops out of Syria, he and the world at large are likely to pay a substantial penalty for early withdrawal.

During his 2016 presidential campaign, Trump had vowed to defeat ISIS, and the military campaigns against the ISIS “Caliphate” in Iraq have apparently succeeded.  In the one remaining area of Syria not controlled by Russia, Iran and the terrorist group Hezbollah, Kurdish forces have been the bravest and most truly effective militia units deployed to the war-torn area.

But painful experience has shown what problems can occur when troops are pulled from war zones before a mission is not only accomplished but is secured by residual forces.

Indeed, the United States still maintains a force of 28,000 U.S. forces along the demilitarized zone between South and North Korea, a war in which fighting ended with the armistice of 1953. The United States also maintains large numbers of U.S. forces in both Japan and Germany, decades after those powers surrendered unconditionally in 1945.

Leaving Syria now would repeat the fiasco of Iraq, when the United States and its allies withdrew after driving Saddam Hussein from power in the first Gulf War.  Saddam and his troops easily regained total control of Iraq and a bloodbath ensued. Similar results happened when U.S. Status of Forces agreements failed to assure a continued U.S. defense shield in Afghanistan and Iraq.

ISIS and the Russian-backed regime of Syrian dictator Bashar Assad would gladly drive out the Kurdish defenders of its enclave and secure total Russia-Iran and Hezbollah control of Syria. The reaction of Russian President Vladimir Putin to the Trump announcement – hailing the move as “correct” because the U.S. troops aren’t needed — should sound alarm bells over how damaging the withdrawal can be.

Adding to the chaos was the abrupt announcement that the usually respected Secretary of Defense James Mattis announced his resignation a day after Trump “unilaterally” announced the withdrawal.

The resignation is only the latest in a long line of high profile departures from the sinking ship of the Trump White House.

Even some members of Congress who normally fall in line behind Trump no matter how wrongheaded his policies may be have balked in light of the impending Syria withdrawal.  We hope that wiser heads around Trump — if there are any left — will persuade the president to cancel this extremely ill-advised decision.