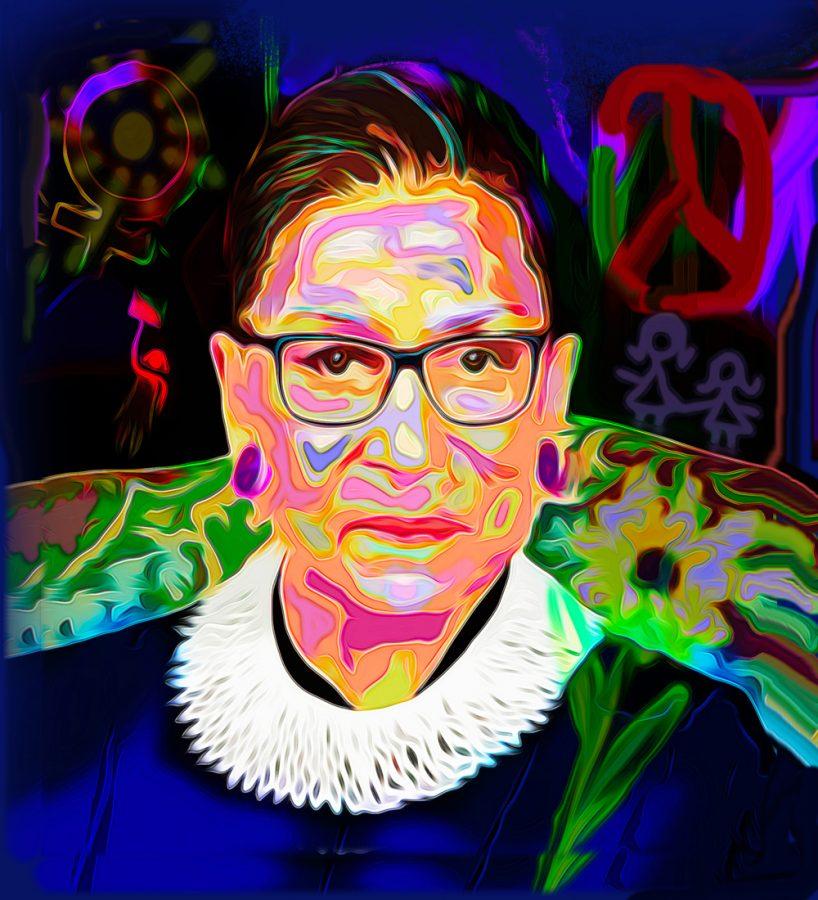 A portrait of U.S. Supreme Court Justice Ruth Bader Ginsburg by St. Louis Jewish artist Sherry Salant. Her work, along with 10 other local artists, is now featured at West County Center. Each artist created a piece depicting their interpretation of the Center’s trademark Dove symbol and the public can vote for their favorite through Sept. 30.

It might be tempting for Jews, who were among the millions that saw U.S. Supreme Court Justice Ruth Bader Ginsburg as an American hero, to point to the Yiddish proverb, “Der mentsh trakht, un got lakht (man thinks and God laughs)” when considering her recent death.

Many had hoped that the first Jewish woman to serve on the Supreme Court would be able to overcome one more bout of cancer and remain on the bench at least until January. Unfortunately, Ginsburg died at age 87 from pancreatic cancer on erev Rosh Hashanah after serving 27 years on the nation’s highest court.

Unlike in many cases where God’s plans remain a mystery, here those plans were plain: Jewish tradition teaches that a person who dies on the Jewish New Year is a “tzaddik,” a person of great righteousness.

And so while the fight over when to fill her seat is already well underway, it is imperative that we reflect on why Ginsburg was a tzaddik, a role model and feminist icon to so many. That was evidenced locally by the hundreds of people who gathered Saturday night at the Old Courthouse downtown for a candlelight vigil.

“A true tzaddik has passed,” former Missouri State Rep. Stacey Newman said at the vigil. “Ruth Bader Ginsburg was a true hero of our lifetime.”

Ginsburg packed a towering intellect in a tiny physical frame, standing barely 5 feet and weighing 100 pounds. She was the second woman to serve on the Supreme Court and became an unlikely pop and cultural icon in recent years, good-naturedly donning the moniker “Notorious RBG.” She also was the subject of an award-winning documentary, “RBG” and a well-received feature film, “On the Basis of Sex.”

Ginsburg became a revered figure among progressive women not only because of her litigation and later, majority opinions and dissents in cases concerning women’s and minority rights, but also because her own story signaled women’s advancement in American society.

When President Bill Clinton announced her nomination to the court in 1993, Ginsburg delivered a tribute to her mother, who had hoped to attend college but instead was sent to work in New York’s garment district and died the day before Ginsburg graduated from high school.

“I pray that I may be all that she would have been had she lived in an age when women could aspire and achieve and daughters are cherished as much as sons,” said Ginsburg, whose egalitarian, loving marriage to Martin “Marty” Ginsburg was admired by many.

One of her most notable opinions was in United States v. Virginia, which ended Virginia Military Institute’s single sex admission policy, in which she wrote, when Virginia “serves the state’s sons, it makes no provision whatever for her daughters. That is not equal protection.”

In Ledbetter v. Goodyear Tire and Rubber Company, a case which concerned workplace discrimination suits, Ginsburg wrote the minority opinion and called on Congress to overturn the decision, which it later did. Justice Elena Kagan, the third Jewish woman to serve on the court, thought that when Ginsburg wrote the opinion, she was drawing on her own experience as a law professor in the ‘60s at Rutgers University, where she experienced the discrimination against women that was then common.

“What explains this gulf between Justice Ginsburg’s experience and mine?” Justice Kagan asked during a 2014 joint appearance with Ginsburg. “In large part the answer is simply Justice Ginsburg. As a litigator and then as a judge she changed the face of American antidiscrimination law.”

Ginsburg also spoke in her later years about the role Judaism and the Holocaust played in her life. Having grown up in the shadow of the Holocaust, Ginsburg told the Forward in 2018, “It makes you more empathetic to other people who are not insiders, who are outsiders.”

In 2017, she made a surprise Rosh Hashanah visit to a synagogue in Washington, D.C., where she told congregants that she saw Judaism as “an ethical religion. That is, we are taught to do right, to love mercy, do justice, not because there’s gonna be any reward in heaven or punishment in hell. We live righteously because that’s how people should live and not anticipating any award in the hereafter.”

Days before her death, Ginsburg told her granddaughter that “my most fervent wish is that I will not be replaced until a new president is installed.”

Regardless of whether one thinks it is important to honor that request, our hope is that we can all honor Ginsburg by remaining resilient in the fight for fair treatment for society’s outsiders, who deserve our empathy.

May her memory be a blessing.