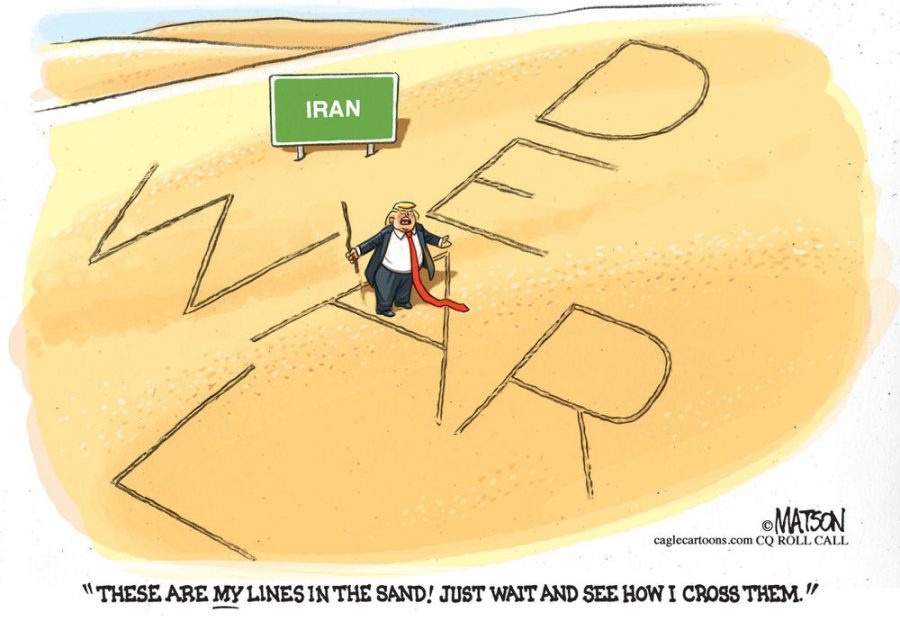 With his last-minute decision to back away from a military strike against Iran, President Donald Trump dodged a dangerous bullet for the United States and his own presidency. But despite the positive outcome, no one should be happy about the unorthodox path the White House followed to its conclusion.

Remember when former President Barack Obama was severely criticized for damaging American credibility after he failed to make good on a pledge to stage a military strike on Syria if it crossed a “red line” by using chemical weapons? After inspectors proved that Syrian President Bashar Assad had indeed used lethal sarin gas against helpless civilians, Obama changed his mind at the last minute and did not attack the brutal regime.

Now, Trump has adopted his own confusing, zig-zag response to Iran’s downing of an unmanned drone aircraft that the United States claimed was over international waters but that Iran insisted was over its airspace.

Most observers, regardless of party, agree that the Iranian regime is an exporter of terrorism, but disagreement prevails over how to respond.

At first, Trump said Iran had made a “big mistake” in attacking the U.S. drone, without specifying what his response might be.  Early in his administration, when Syria was shown to have again used chemical weapons against innocent civilians, he ordered a strike against factories that produced the deadly gas for the regime. Tomahawk missiles were launched against Syrian weapon manufacturing and storage facilities, an action that won praise from members of his own party who had mocked Obama for backing away from his red-line threat.

In a very busy news weekend, Trump made a rare appearance with Chuck Todd, moderator of NBC’s “Meet the Press.”  He told Todd that a strike against Iran was ready to go and that he was prepared to give the order to launch the attack against three targets.

But, he said, when he asked his military advisers how many people would die as a result of the operation, he was told 150; he then decided to cancel the strike. Trump decided it was “disproportionate,” a term often used to criticize military responses by Israel against Hamas or Hezbollah.

Three years ago, Trump campaigned on a platform of stopping entanglements in “endless wars in the Middle East,” citing our now-17-year involvement in Afghanistan and the continued involvement in Iraq. Still, Trump said, he has both hawks and doves among his advisers. Among the hawks is national security adviser John Bolton, who is said to have favored military strikes against Iran even before the downing of the drone.

There is a growing element among Trump’s base that is against military adventures abroad, including some of the president’s supporters at Fox News such as Laura Ingraham and Tucker Carlson. Carlson reportedly appealed directly to Trump not to launch the strikes against Iran.

Carlson’s involvement was reported in a June 21 New York Times story with the headline: “Urged to Launch an Attack, Trump Listened to the Skeptics Who Said It Would Be a Costly Mistake.” The article begins, “He heard from his generals and his diplomats. Lawmakers weighed in, and so did his advisers. But among the voices that rang powerfully for President Trump was that of one of his favorite Fox News hosts: Tucker Carlson.”

The piece reports that Carlson had “told Mr. Trump that responding to Tehran’s provocations with force was crazy.  The hawks did not have the  president’s best interests at heart, he said. And if Mr. Trump got into a warwith Iran, he could kiss the chances of re-election goodbye.”

Sen. Lindsey Graham, R-S.C., who had warned that the U.S. would “inflict severe pain” on Iran, was fairly muted in his response to Trump’s decision to pull back. Trump still has a 90-plus approval rating among Republicans, and GOP lawmakers are reluctant to publicly attack his decisions.

Hardliners in both Tehran and Washington appear increasingly to be pushing their nations toward war, a development that would likely to be seen as a costly mistake on the part of the Trump. Bolton, the hardest of the U.S. hardliners, warned Iran “not to mistake prudence and restraint for weakness.”

The president enunciated his red line for Iran by warning that his restraint could disappear if any Americans were  killed as a result of escalating attacks in the Strait of Hormuz. The situation remains fluid, and events, along with the president’s mind, could change on a dime. On Monday, President Trump imposed new sanctions on Iran during this period of high tensions, saying he preferred them to a military strike.

But what may be most disturbing is the president’s willingness to heed advice from a television commentator rather than have faith in his advisers. Even if Carlson’s point of view is the more prudent one in this case, using him to influence a major decision like a military response hardly sends a message of confidence in the administration’s competence.

In the meantime, Trump and the United States have dodged  a potentially lethal bullet. How he handles the next inevitable provocation could very well determine how history judges his actions on this latest crisis.

And competence in the handling of delicate Middle East policy is most important to the future survival and safety of Israel. If a cold war of words and sanctions escalates to a hot war that could engulf the entire region, there will be no winners. Letting talking heads on television steer policy in such a fragile area could lead to a tragic conclusion.