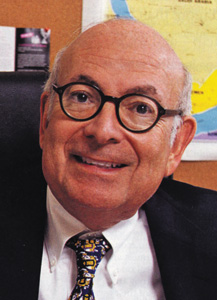 In the midst of the oceans of ink, forests of newsprint and trillions of online observations about the passing over the weekend of Cards legend Stanley Frank Musial—The Man—we would like to confer on him perhaps the most appropriate honorific title of them all: Stan the Mensch!

Yes, Stan Musial, who was raised by his Polish Catholic family in his native Donora, Pa. was not Jewish, but if there was ever a St. Louisan who transcended all religious, ethnic, national, racial and other barriers as a unifying force during his 22 years of mythic stardom wearing the Big Number Six for the St. Louis Cardinals, it was “Baseball’s Perfect Warrior, Baseball’s Perfect Knight,” as the inscription of the pedestal of his statue in front of Busch Stadium reads.

The late Alfred Fleishman, founding partner of the public relations firm of Fleishman-Hillard, and a past president of the Jewish Federation, the St. Louis Jewish Light and Congregation B’nai Amoona, represented Cards owner Gussie Busch and the Cardinals organization for many years. “Without question, Stan Musial was the Greatest Cardinal of them all,” Fleishman said on many occasions. “Not only was he one of the all-time greats on the field, but was one of our greatest and most generous citizens off the field.”

Stan the Man, who had already been admitted to the Baseball Hall of Fame, had won the National League MVP Award three times, helped lead the Cards to three World Series victories and was named to 24 All Star teams, was presented in 2011 with the Presidential Medal of Freedom, the nation’s highest civilian honor.

Musial in his “retirement” years after his final season with the Cards in 1963, continued to illuminate the rooms of children’s hospitals, where he would visit critically ill children, lifting their spirits and helping them deal with the burdens of their illness. His entry onto the fields of Cardinals home openers, wearing a brilliant smile to match the vividness of his Cardinal red sports jacket, became an annual ritual for what has come to be called the Cardinal Nation.

Perhaps the most appropriate title that would most aptly describe Stan Musial would be “Stan the Mensch.” The word “mensch” in the original German merely means a human or person. But in its Yiddish version, mensch has come to mean a decent, compassionate, thoughtful and exemplary human being. Generations of Jews have been told by their parents, “Just be a mensch.”

No person in the long history of Greater St. Louis deserves the title “Mensch” with a capital M than Stan Musial. When Albert Pujols was wearing the Number 5 on his jersey and impressing local sports media, he was being called “El Hombre” (The Man, in Spanish). No, Pujols corrected, there is only one Cardinal who deserves to be called ‘The Man’ — Stan Musial.

Perhaps because Musial was such an exemplary person, about whom there was never even a hint of scandal, is one of the reasons that the national sports media seldom ranked Stan among the very top, along with Joe DiMaggio and other players of his and later eras.

But in our Book, Stan was in a class all by himself. We hope that this Perfect Warrior of Baseball will find shelter in the shadow of God’s wings, and that his memory will always be for a blessing.