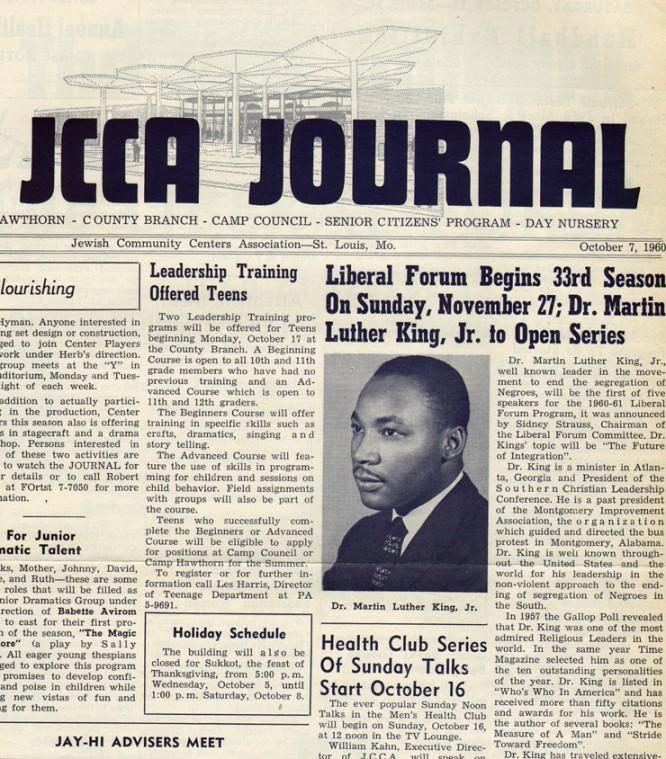 The birthday of Rev. Dr. Martin Luther King Jr. will be marked this year on Monday, Jan. 16. Considering his major accomplishments as the leader of the U.S. Civil Rights Movement – for which he earned a well-deserved Nobel Peace Prize – it is still hard to believe that King was only 39 years old when he was assassinated on the balcony of the Lorraine Motel in Memphis in April, 1968.

It is well-known that King had many supporters nationally in the American Jewish community, most notably Rabbi Abraham Joshua Heschel, who said he felt like his “feet were praying” when he marched with King from Selma to Montgomery.

King also had supporters and friends in the St. Louis Jewish community and made some significant historic speeches at Jewish venues at a critical time in his career. Several of his most prominent supporters in the local community have passed away, including Rabbi Jerome W. Grollman of United Hebrew and his cousin, Rabbi Bernard Lipnick of B’nai Amoona. Both traveled south to support King in his marches and rallies on behalf of full civil rights for African-Americans.

In 1960, when King’s activities were getting national attention and generating controversy, Kahn was serving as the executive director of the JCC. Even within the normally progressive local Jewish community, there were some contingents who felt threatened by King’s movement, fearing that he was trying to effect change too rapidly and possibly stirring things up more than necessary.

Kahn was not among those naysayers. He believed passionately in King’s mission, having been inspired by his late own father, Ziggy Kahn, who directed the JCC in Pittsburgh and tried to lead a boycott against the Nazi Olympics in Berlin in 1936.

With the backing of the late Isadore E. Millstone, then President of the JCC, Kahn arranged for King to be a speaker in the JCC’s famous “Liberal Forum,” a prestigious event that had previously featured speakers such as Eleanor Roosevelt and Clarence Darrow. King’s speech at the Liberal Forum took place on Nov. 27, 1960.

His topic was “The Future of Integration.” Because of the unprecedented size of the crowd, the event was moved to United Hebrew (then located on Skinker Boulevard), with the help of Rabbi Grollman.

Kahn received the Heschel-King Award back in 2008, along with Dr. Henry Givens, president of Harris-Stowe University in St. Louis. The award, conferred by Jews United for Justice, is annually presented to an African-American and a Jewish American who exemplify the spirit of cooperation and support for civil rights of Dr. King and Rabbi Heschel.

At the Heschel-King Award ceremony, Kahn recalled King’s “Liberal Forum” talk at United Hebrew, including a dinner at the home of Paul Berwald before the talk. “Dr. King seemed exhausted,” Kahn recalled. “He had been arrested, roughed up and jailed in Alabama just before he came to St. Louis. To rescue him from the after-dinner questions, my wife Shirlee and I said we needed to go downtown to meet the editorial board of the St. Louis Post-Dispatch. We were able to give Dr. King a ride around St. Louis and let him unwind a little.”

King also spoke at Temple Israel, on Sept. 20, 1963, on the Shabbat between Rosh Hashanah and Yom Kippur. Over 3,000 people attended that event, where King discussed agape, a concept of selfless love that is central to Christian values.

Today, the Jewish agencies on the Millstone JCC campus still pay homage to King during an annual Rev. Dr. Martin Luther King, Jr. Day program. Kahn helped to institute the observance, which has in recent years past brought together African-American and Jewish students for an event with speakers and school choir performances (see Chai Lights in this week’s Jewish Light, page 21).

“Our task is to build upon Dr. King’s legacy, including his cooperation with Rabbi Heschel to make certain, as John F. Kennedy said that ‘here on earth, God’s work must truly be our own,'” Kahn said.