I survived the Halle synagogue shooting. One year later I faced my attacker in open court.

BERLIN (JTA) — Across the room sat a man, a murderer, who had tried to kill me and 51 others praying in the Halle Synagogue last Yom Kippur. Responding to question after question from the judge, he espoused the most hateful ideology, showing no shame at his open contempt and cruel rhetoric toward Muslims and Jews, people of Arab and Turkish descent, Black people, women — even other white people who didn’t support his cause.

During the first day of the trial for the Halle attacker, an exchange between the judge and the assailant took well over three hours. As a victim of attempted murder by this person, I had been petrified of this moment. It drained me. Yet rather than feel angry, sad or afraid at his awful statements, I sat there feeling relieved and even empowered.

This man displayed in open court that he was exactly who we thought he was. Even in a court of law, he stood by his convictions and his quest to act on them. This person was rendered psychologically fit to stand trial by psychiatrists; his statements were not born of insanity or delusion. This man possesses a worldview that kills people. And he is not alone.

I decided to be a co-plaintiff in this trial in order to play a role in the fight against right-wing extremism, to bring to surface policy issues in need of systemic change and to seek a form of personal justice. I am the granddaughter of four Holocaust survivors. For the two still living in my home state of New York, not to mention the rest of my immediate and extended family, my choice to live in Germany is complicated.

I am here to help strengthen the Jewish community in Germany, focusing primarily on students and young adults through my work with Hillel Germany, using my credentials as a rabbi and organizer. And I am also here in order to be closer to my personal history and to the emotional reality of miraculous existence. In Berlin, one cannot ignore history. Stepping into a synagogue is an act of counterculture; we are here, persevering, despite the odds. Unlike many of my Jewish peers growing up in New York, this mentality feels natural to me. Here it is a norm.

I had long thought that the concept of “miraculous existence” would be one I simply inherited from my grandparents. Epigenetically, the trauma would recur in unexpected ways throughout my adolescent and young adult years. Through personal practices like writing and therapy, I worked to put the trauma to bed, to convince my brain and body that it was past – truly, the Holocaust is no longer here.

What I experienced in Halle changed that indelibly.

On Oct. 9, 2019, I became a direct victim of anti-Semitic, right-wing nationalist, white-supremacist violence. For the first time in my life, I experienced the feeling of nearly losing my life, my daughter’s life and the lives of community members I cherished. I experienced the feeling of life-or-death responsibility that comes with choosing to engage in the act of “counterculture” that is stepping into a synagogue.

But unlike my grandparents, I have the ability to resist. To name his crimes and have them heard in a German court of law. To connect them to the dark history of this country that allowed a spread of this ideology that killed my family. To stand up, as a Jew, as a third-generation-turned-first-generation survivor, and turn that moment of horror into an opportunity to correct countless moments of injustice.

Germany is a nation that has claimed to learn from its errors, and in many ways it has. I believe in the Jewish future in this country. Yet in order for there to be a robust, empowered Jewish future, Germany must express deeper, more concrete forms of solidarity and action. Follow the empowered voices, like that of Anna Staroselski, president of the Jewish Student Union Deutschland (one of our local partners), who said at a solidarity rally on July 21: “I was born and grew up here, and yet you are always rubbed in the face with ‘you are other!’”

Today, a significant part of our work at Hillel and beyond is leading the charge in modeling how as Jews, we can shape our own narrative — and beyond that, how we ought to hold our governors accountable to that narrative. Growing up with the sense of needing to hide one’s identity, to fear violence from schoolmates, to expect to be treated with prejudice and even violence over one’s entire lifetime — this is not a safe way to live. Politicians, law enforcement and ministers of justice ought to be asking themselves: How might we uproot this prejudice from the system? How might we show that we are committed to combating anti-Semitism not only in name and in retrospect, but also in the internalized prejudices that lie at its roots?

At the same time, the Jewish story is about more than anti-Semitism, and yes, it is also about more than “miraculous existence.” Here, and around the world, as a minority Jews are in a sort of “maturation process,” as we find ourselves with greater privileges than ever before. How might we draw upon our own history in order to build a more just world? How might we apply the clarity we’ve obtained from our past — particularly around such fatal ideology — and learn from it in the present, perhaps acting not only for our sake but for the sake of others who are threatened today?

One day in a German court reminded me of the opportunity we have, within the Jewish community and outside of it, to recommit to our moral responsibility in the world.

“Let slanderers have no place in the land; let the evil of the lawless man drive him into corrals. I know that the LORD will champion the cause of the poor, the right of the needy.” — Psalm 140 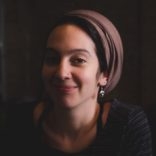 is executive director of Hillel Germany and co-founder of Base Berlin, an initiative of Hillel International supported by Genesis Philanthropy Group, European foundations, and individual donors.