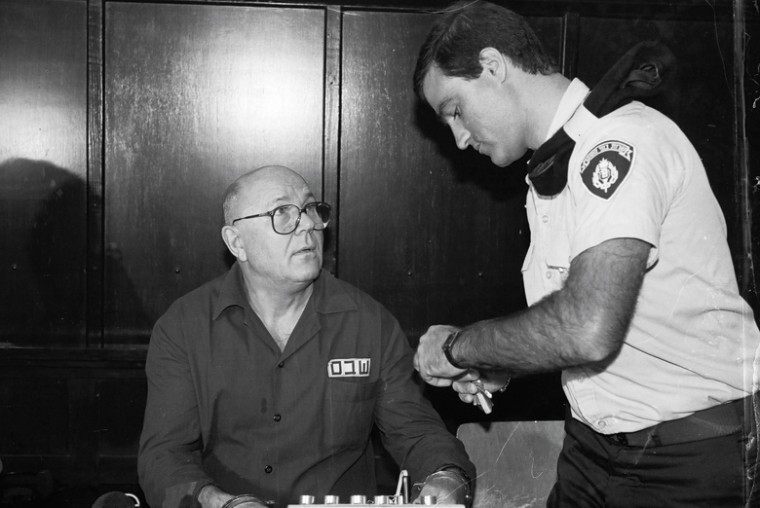 John Demjanjuk in Israel's Supreme Court in Jerusalem. Demjanjuk was accused of concealing a past as a Nazi concentration camp guard. File photo: Flash 90

By Eric Mink, Special to the Jewish Light

It was a good year for genocide.

Or, more precisely, 2011 was a good year for pursuing, prosecuting and punishing mass murderers, torturers, sadists, rapists and exterminators-and the ideologues, strategists and functionaries who enable the dirty work of crimes against humanity.

• In May and July, respectively, Serbian authorities arrested Ratko Mladic and Goran Hadzic, the last of 161 persons under indictment by the International Criminal Tribunal for the former Yugoslavia. Both were extradited to the Netherlands and are awaiting trial at The Hague.

Mladic’s indictment charges the former Bosnian Serb military commander with multiple acts of genocide and crimes against humanity, including his direction of the 1995 massacre at Srebrenica and murder and torture at Prijedor.

Hadzic is charged on multiple counts of genocide and crimes against humanity that occurred in Croatia, including the murder of 250 hospital patients at Vukovar in 1991.

They join Radovan Karadzic, the notorious former Serb leader whose trial at The Hague is ongoing.

• From its headquarters in Arusha, Tanzania, the International Criminal Tribunal for Rwanda last year continued conducting trials, considering appeals and acquitting, convicting and sentencing defendants for the 1994 genocide in Rwanda that claimed 800,000 lives in barely 100 days. Victims were mainly members of the Tutsi tribe; their killers were mainly members of the Hutu tribe.

In December, the tribunal’s routine work included reducing the sentence of Dominique Ntawukulilyayo from 25 years to 20 years. The court’s appeals chamber ruled that he mistakenly had been convicted of ordering the killing of Tutsi civilians. It affirmed, however, his genocide convictions for aiding and abetting the murders.

• In May, a German court in Munich convicted John Demjanjuk, 91, of facilitating the murder of an estimated 28,000 Jews because of his 1943 service as a guard at the Nazi death camp at Sobibor in Ukraine. Born and raised in Ukraine, Demjanjuk was the first non-German convicted in Germany in connection with the events of the Holocaust.

The prosecution was highly controversial, as was his previous trial on different charges. Demjanjuk made his way to the United States after World War II, identifying himself as a Soviet Army soldier who had been held as a prisoner by the Germans. He settled in Cleveland, became a United States citizen, raised a family and worked in an automobile plant.

In 1977, he was accused of being Ivan the Terrible, an infamous guard at the Nazi extermination center at Treblinka, Poland. He was stripped of his citizenship, sent to Israel for trial and convicted and sentenced to death in 1988 by a court in Jerusalem.

In 1993, the Supreme Court of Israel determined that Demjanjuk was not Ivan the Terrible and ordered him released. He returned to the U.S., but subsequently was accused in Germany of assisting with mass murder at Sobibor. In poor health, he was sent to Germany for trial in 2009, convicted last year and sentenced to five years in prison. Demjanjuk is free on bail in Germany while his appeal is pending. Last month, an Ohio judge rejected a request to restore his U.S. citizenship.

• On Nov. 21, three senior officials of the Khmer Rouge movement that ruled Cambodia between 1975 and 1979 began their trial before the Extraordinary Chambers in the Courts of Cambodia in Phnom Penh on charges of genocide and crimes against humanity.

Led by the late Pol Pot, the Khmer Rouge forcibly evacuated Cambodia’s cities and persecuted educated citizens, professionals and intellectuals in an ideological crusade to “purify” the country. The result was widespread death from starvation and physical collapse. Combined with systematic torture and mass execution of political opponents, the practices killed at least 1.7 million Cambodians during the Khmer Rouge’s four-year reign.

The current defendants include Pol Pot’s second in command, the regime’s ideological leader and its foreign minister. The court’s only other trial to date, that of Kaing Guek Eav, concluded in 2010 with Kaing’s conviction “for the following offences as crimes against humanity: murder, extermination, enslavement, imprisonment, torture (including one instance of rape), persecution on political grounds, and other inhumane acts,” as well as comparable acts in violation of the Geneva Conventions of 1949. Kaing, known as Comrade Duch, had run the horrific Tuol Sleng prison where some 17,000 Cambodian men, women and children were tortured, many of them to death. Most of those who survived the interrogations were murdered later.

The progress of 2011 notwithstanding, it’s hardly news that the wheels of justice grind too slowly, perhaps slowest of all for the most heinous of crimes. Demjanjuk’s conviction in Germany came 64 years after the end of World War II in Europe. The criminal tribunals covering the Bosnian wars and Rwanda were created nearly 20 years ago.

Slobodan Milosevic, the Bosnian leader at the top of the genocidal chain of command, managed to string out his trial at the Hague for four years without a verdict. Then he died. The work of the Cambodian court has been hampered by former Khmer Rouge officials in senior positions in the current government.

Despite these and other very real problems, it would be foolish to deny the significance of the judicial proceedings.

Actor and social comedian Eddie Izzard riffed on the contradictions of mass murder in his daring 1999 recorded stage performance, “Dress to Kill”:

“Pol Pot killed 1.7 million people. We can’t even deal with that,” he said. “We think if somebody kills somebody, that’s murder. You go to prison. You kill 10 people, you go to Texas, and they hit you with a brick. Twenty people, you go to a hospital, and they look through a small window at you forever. And after that, we can’t deal with it. Somebody’s killed 100,000 people, we’re almost going, ‘Well done! You killed 100,000 people? You must get up very early in the morning. I can’t even get down to the gym.'”

In 2012, even Izzard would have to concede we’ve gotten better at dealing with it, though still far from good enough.