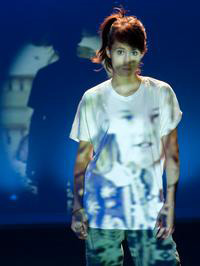 Magen Wiles performs in the one-woman show "My Name is Rachel Corrie."

A lot of Jewish cultural stuff going on this weekend. Let’s see, there’s “My Name is Rachel Corrie” at SLU’s black box theater in Xavier Hall. I saw the one-woman play last week and thought it was very well done, with a terrific performance by its star, Magan Wiles. But the real drama came afterwards during the “talk back” between the audience and Magan (and her producer) about Rachel Corrie, the 23-year-old American who was crushed to death by an Israeli bulldozer while trying to protect the home of a Palestinian family

in Gaza. One man in the audience thought the play was hateful and extremely anti-Semitic. My Israeli friend Yael felt quite the opposite – she didn’t think the play conveyed strongly enough the horror of the occupation. I strongly urge you to go and see what you think, and let me know. For more information, email [email protected] .

On a lighter note, the Pernikoff Brothers, Tom and Rick, who are native St. Louisans and returned here from San Francisco to pursue their music fulltime, will be performing at the Duck Room at 9 p.m. Saturday and giving away their new CD with every $10 ticket bought. I’m hoping to check out the show but I do have a conflict: one of my favorite local bands, The Heaters, who split up some time ago but have been nice enough to reform for several Futterman-Burkett parties, are getting together to play at the Stagger Inn in Edwardsville that night. Can I do both? Or have I gotten to the age when trying to cram two concerts 45 minutes away from each other on the same night is too exhausting to even try to attempt? We’ll see.

One last thing: The Westboro Baptist Church, which seem to make a career picketing Jewish and gay events, will be in town Saturday protesting at the JCC in Creve Coeur at 2, the Cardinals game at 6 and the Lady Gaga concert at 7. Westboro is a “show” in its own category.