Fulfill vows with actions, not words 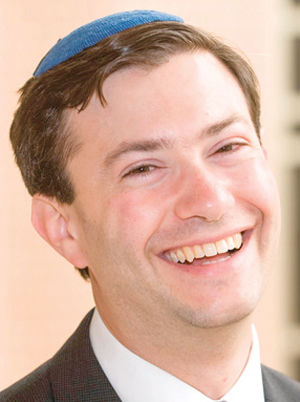 Rabbi Noah Arnow serves Kol Rinah and is a member of the St. Louis Rabbinical Association.

I was a little proud, and a little embarrassed, too, when I realized they had given me the hard part.

I was 18. It was the summer between high school and college, and I was in Jerusalem studying for a month at the Pardes Institute of Jewish Studies. The culmination of a class on chanting Torah was, logically, chanting Torah one morning at services. I could read Hebrew and carry a tune and had read Torah before, learning it by memorization. So I was primed and ready to really learn the system of Torah trop, the symbols that indicate the melodies for chanting Torah, and by the end of the class, I was pretty good.

So they gave me the tough part. What made it tough were the words: They felt repetitive. And it was rife with words ending with breathy H sounds, not a sound that is part of English.

I did a good job in the end, maybe even chanting with a bit of style. Starting that fall, I put my newly learned Torah reading skills to good use, reading a little Torah almost every Shabbat morning at Hillel for the next four years.

It was years later that I ever paid any attention to what the words that I had read that July morning in Jerusalem actually meant. It was a part of Numbers 30, which explains whose vows may be annulled and how. I do not especially appreciate how the Torah requires women’s vows to be annulled by the men “responsible” for them, but the general orientation toward vows is fascinating.

Our words matter, the Torah says, and they bind us to people and God. Absent a permitted way of annulling a vow, the vow must be fulfilled. It’s a religious obligation, a commandment, a mitzvah to do so. But making a vow is almost never required, and that’s why the subsequent rabbinic tradition strongly discouraged vows, because they are often ill-considered and rashly made and can be made so quickly, with just a few words.  Words today are as cheap as ever, and we should retain that deep aversion to verbal vows.

But what if you could make a vow slowly, adding a syllable every year until the vow was complete?

Looking back now, my chanting those words about vows, even while not understanding them, bound me to the act of chanting Torah and to a life of Torah. The vow wasn’t intentional, but rather it was a trajectory on which I set myself, not able to see much beyond where I was at the time. And so many subsequent decisions were like additional syllables of the vow.

The responsibilities we take on in life sometimes come in sudden vow: at a wedding, for example, or in becoming a parent, or in starting a new job, whether paid or as a volunteer.

But very often, we make vows without even realizing the commitment we are making. We slip slowly into an obligation that gradually becomes a part of who we are. This happens in relationships, when we enter into roles as caregivers of different kinds for people for whom we may not have obvious responsibility. When we slowly become involved in organizations and nonprofits, our commitment turns into a vow for us, a vow whose violation may do violence to our soul.

What are the vows you have made explicitly? What vows have you made implicitly that have come into force over time?

The stories of our lives are written by the words of our actions.  Actions that become implicit vows made to ourselves, to those around us and who rely on us, to institutions and organizations, and to the Holy Blessed One, are not to be avoided. Rather, they are to be applauded. It’s those long-standing, avowed commitments to causes and communities, to values and individuals, that build our world and create our legacy.