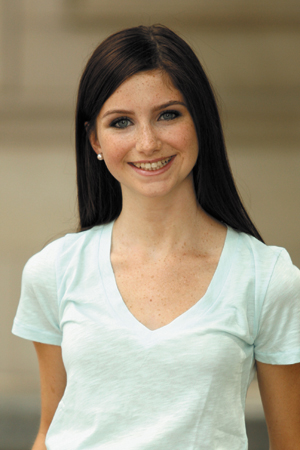 Rachel LaVictoire,  is a recipient of the prestigious Nemerov Writing and Thomas H. Eliott Merit scholarships at Washington University, where she is a sophomore. She grew up in Atlanta, where she is an active member of Temple Emanu-El and the Marcus Jewish Community Center.

Total belief and devotion to G-d and to Judaism is probably one of the only concepts that’s easier for a child than for an adult. When we’re young, it’s simple; the logic is so cut and dry: We know G-d exists because… (1) People have been believing in G-d for a very long time. (2) Our world had to be created by something, and since nothing could have existed before creation in order to do the creating, it must have been G-d. (3) We have a big book filled with stories about miraculous events and obviously G-d is the only being that can perform miracles.

But then we go though life, developing in all sorts of ways—socially, academically, philosophically and professionally. It starts slow. We hear about this thing called evolution, and get briefed on the theory of the Big Bang. We learn words like “realistic” and “rational,” and start to use them in our conversations about the Torah. We read books about the Holocaust and start thinking about how many prayers were left unanswered.

And it seems that the older we get, the more difficult it becomes to say with unwavering confidence, “yes, I believe in G-d and in the teachings of Judaism.” That beautifully simple logic we used as a child no longer applies because so many variables have been added to the equation: what about science, what about other religions, and what about Jewish laws in modern times?

By the time we’re introduced to Abram in the Torah, he’s already lived a full life. The Talmud recounts his early days: Abram was born in Mesopotamia. He was the son of Terach, an idolater, and he and his family lived in a kingdom ruled by King Nimrod. Abram was a philosopher, an astrologer, and an outspoken opponent to the worship of idols. He married Sarai and moved to Haran. It is not, however, until the age of seventy-five, that he makes an appearance in the Torah. He, therefore, has obviously outgrown his naïve and simplistic views of the world and is well into his years of complex thought.

“And the Lord said to Abram, ‘Go forth from your land and from your birthplace and from your father’s house, to the land that I will show you. And I will make you into a great nation, and I will bless you, and I will aggrandize your name and you shall be a blessing’ … And Abram went, as the Lord had spoken to him, and Lot went with him, and Abram was seventy five years old when he left Haran” (Genesis 12:1-4).

This was the command that started it all—lech lecha, go forth. Abram went, physically removing himself from Haran in order to travel to the land of Canaan where G-d appeared to him and promised the land to Abram’s descendants. There, the covenant was made between Abram and G-d. It was there, in the land of Canaan, that Abram built an altar to G-d.

But what made the move so significant? The answer is just a few words: eretz, moladtecha, and beit avicha. These are the places from which Abram was told to leave—his land, birthplace, and father’s house. While, yes, Abram did lech, did physically “go” to another land, there was also a metaphorical journey going on.

Starting with the words themselves, if not taken for their literal definition, eretz, moladtecha, and beit avicha each carry a second possible meaning. Eretz, or land, could be understood to represent one of two things: one’s possessions wealth, or, based on its Hebrew root, it could be taken to mean ratzon or “will” and “desire.” (Choosing between the two seems a rather unnecessary task at the moment, but it’s important to recognize both options.) Then moladtecha, “birthplace,” refers to one’s home and society. And finally, beit avicha, “father’s house,” refers to one’s intellect and rational mind.

From there, we’re lead to consider what might happen to our thoughts and beliefs if we lech lecha away from our physical possessions, our homes, and our rational minds? Would we, too, feel compelled to build an altar to G-d—rather, compelled to fully devote ourselves to the Lord, our G-d?

Most likely, the answer is yes. Without the distractions and complications of adolescent and adult life, dedicating yourself to Judaism would most likely be a fairly simple task. But it would also be an insincere one. To believe in something only when it’s convenient is not to believe in it. This is why I think there may be just one more underlying metaphor at play here: we don’t lech lecha, “go forth”; we separate, or compartmentalize. My belief in G-d doesn’t always mesh with the other variables in my life, but there’s something about the innate feeling of connection to G-d that makes me feel like I can have both at once. Even if the realities of the adult world don’t agree with my lifelong belief in G-d, it’s my beliefs that can lech lecha—that can continue progressing, aside from my possessions, my desires, my society, and my rational mind.