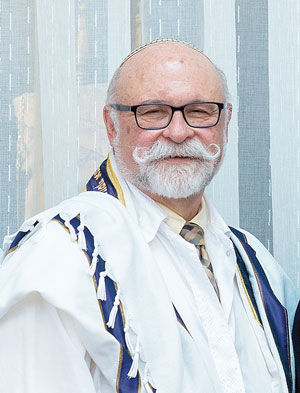 Rabbi Josef Davidson serves Congregation B’nai Amoona and is a member of the St. Louis Rabbinical and Cantorial Association, which coordinates the weekly d’var Torah for the Jewish Light.

Remember when we used to congregate together in our synagogues, at the Jewish Community Center, at restaurants, in movie theaters and in other such meeting places? Remember when people wearing masks were usually about to commit a crime rather than protect themselves and those with whom they came into contact? It has now been a year since we experienced any of these, a long, difficult year during which we have remained isolated from one another physically and, in some cases, even virtually.

Needless to say, many people are growing weary of all of these restrictions, some even promulgating the theory that the threat posed by COVID-19 has been exaggerated. Leaders at all levels of government have provided mixed messages, at best, about the need to remain socially distant and masked. Missouri is one of 13 states in which the governors have rescinded a mask mandate, and governors in several states have gone ahead and removed all restrictions to allow business as usual to return. To say the least, many are frustrated by the length of time it has taken to begin to see an end to the pandemic and a return to the good, old normal.

It’s difficult to wait, as we learned in last week’s Torah portion, Ki Tissa. There the people grew weary of waiting for Moses to return from the top of the mountain and so gathered together in rebellion against Moses and God to demand that Aaron build them a golden calf, a replacement for Moses and God, that might lead them further on their journey to the Promised Land. The verb in Hebrew for this gathering is Vayikahel, interestingly the passive voice for “to congregate.” They were congregated, not by a leader, not to process the miracles of the Exodus, the Reed Sea, or the Revelation, but out of frustration and impatience. As a result, they committed the most grievous sin — that of idolatry.

This week’s double Torah portion begins with an active voice verb with the same root meaning.  Vayakhel. Whereas the subject of the passive voice verb was the people themselves in last week’s Parashah, Moses is the subject of Vayakhel. It is Moses who gathers the people together. Just as did Aaron , when faced with the demand that he create a replacement god and leader, Moses solicited the materials necessary for another project: the construction of the Mishkan, the Sanctuary, which would unify the people for good, not evil, and demonstrate that the time at long last had come to move from the base of the mountain to the Promised Land. In many ways he gathered them together as a congregation, a holy congregation, to build a structure that would atone for the sin of the golden calf, for it was at the Mishkan that they would commune with God in many different ways, including the atonement for wrongdoing.

Two different gatherings: one due to impatience and frustration and one with the purpose of moving on to a “new normal” in which the people would no longer be slaves to other human beings but servants of God, in which they would be self-determining and in their own land. Two different congregations: one brought together by fear, frustration, and impatience and one convened by Moses; one that hearkened back to their slavery past and one that heralded their new future. One gathering was spontaneous, while the other was part of a plan. The former was doomed to fail; the latter was to build for success.

We remember and long for the time when we could freely gather together, when we could hug one another, shake one another’s hand, when we could daven together, enjoy events together. It’s difficult to pass this one-year mark and still not be able to do these things. Fear, frustration, and impatience may cause some to gather too soon, exposing themselves and others to a very real danger, to be gathered as were those who were gathered together to build the golden calf. I hope and pray that we, as a Jewish community, will continue to demonstrate that we have learned that lesson, that we can trust that soon enough our physicians and scientists will declare that we have reached the Promised Land, a place and time in which we can build physical as well as virtual community, in which we can all be healthy. The difference between the two forms of the verb is the difference between a spontaneous gathering and one convened by leadership. May we have the trust, the faith, the patience, and the fortitude to know the difference. Shabbat Shalom!