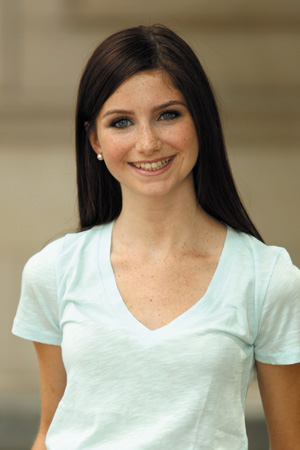 Rachel LaVictoire, 18, is a recipient of the prestigious Nemerov Writing and Thomas H. Elliott Merit scholarships at Washington University, where she is a freshman. She grew up in Atlanta, where she is an active member of Temple Emanu-El and the Marcus Jewish Community Center. Rachel will be contributing regular commentaries and d’var Torah reflections, which will be posted on the Jewish Light’s website,  stljewishlight.com — some of which will also be included in the Jewish Light’s print editions.

I was diagnosed with Acute Lymphocytic Leukemia on August 13, 1999. For two and a half years I received weekly chemotherapy treatments at Egleston Hospital in Atlanta. Armies of chemicals marched through my body, each with direct orders from doctors and nurses. Vincristine attacked the front line, killing off cells by interfering with the multiplication of their DNA. Methotrexate picked up the rear and fought the growth of cancer cells; and Prednisone was the medical aid, reducing possible side effects like swelling and allergic reactions. For defense aid, my blood pressure, weight, height, and cell counts were monitored vigorously.

The war ended on February 13, 2002. The chemicals won. Or did they? Was the victory really due to the intricate concoction of chemical upon chemical, or was it due to the number of prayers that came from friends and family?

For two and a half years, my family was told, “Rachel is in our prayers.” People were calling on G-d from Georgia, Florida, New York, New Jersey, California, Alaska, Missouri, Michigan, Ohio, and probably other places as well. My mom prayed, my dad prayed, my brother prayed, I prayed, and then, we’d all pray together. Every night when I went to bed, my brother, my dad and I would close our eyes and say:

“Dear G-d, thank you for letting us have another great day. Please watch over us tonight and help us to have a good night sleep with all sweet dreams and no bad dreams. Please bless mommy and daddy, Max and Rachel, Ryan and Jeremy, Grandma and Grandpa…”

The list would go on like that, naming all the loved ones in our lives including “all the doctors and nurses that help take care of Rachel” and concluding by asking G-d to, “watch over us tomorrow and help us have another great day. Amen.”

We call it the Magic Prayer, and I still say it with my dad every night when I’m home. When I was five, it really did seem like magic. I was talking to a being that I couldn’t see, and yet I could feel that He heard me. I know He heard me. G-d heard me, my brother, my dad, my mom, my aunts, uncles, cousins, grandparents, friends, parents’ friends, and everyone else and that certainly led to my miraculous recovery, right?

I’m using my cancer survival as just one example of a dilemma that I encounter on almost a daily basis: prayer versus action.

Very generally speaking, I believe that G-d will allow everything in my life to eventually work out. I haven’t yet decided whether that means G-d has an ultimate plan for me, whether or not He moves me like a puppet, or if He simply created me with the Da’at, or knowledge, to succeed.

However, I’m also a smart kid. I know that I can’t just sit back and say, “G-d won’t let me destroy my life, I’m fine.” I have to have just as much faith in myself as I have in G-d.

My exams start this week, so I have to get organized and focused. I have to prioritize my tasks and work as hard as I can. G-d won’t teach me microeconomics, but He gave me eyes for reading, hands for writing, and a brain for thinking. Now I have to do the work.

In this week’s Torah portion, Mikeitz, Pharoah hears of Joseph’s ability to interpret dreams and sends for him. Pharaoh said to Joseph, “I have dreamed a dream, and there is no interpreter for it, but I have heard it said of you that you understand a dream, to interpret it” (Genesis 41:15). Joseph replied saying, “Not I; G-d will give an answer that will bring peace to Pharaoh” (Genesis 41:16). Joseph then interprets Pharaoh’s dream, telling him that there will be seven plentiful years of harvest, followed by seven years of famine. Now, Joseph could have stopped there, he was only asked to interpret the dream. He continued, though. Using his own logic, he mustered up the confidence to advise the King of Egypt. He told Pharaoh, “seek out an understanding and wise man and appoint him over the land of Egypt… let them collect all the food of these coming seven good years, and let them gather the grain under Pharaoh’s hand, food in the cities, and keep it” (Genesis 41: 33-35). Pharaoh appointed Joseph to the position and thus Joseph watched over all of Egypt.

Notice the difference here between prayer and action. G-d is responsible for Joseph’s capacity to read dreams, and Joseph is responsible for what he chooses to do with that gift. Likewise with my cancer treatments. G-d endowed certain people with a gift for science, and those who applied themselves were able to develop a protocol for chemotherapy. G-d also blessed my family with unrelenting strength and so we chose to fight, week after week, fever after fever, methotrexate shot after methotrexate shot.

It seems then, that it’s not so much prayer versus action, so much as it is prayer and action. Neither can exist on its own. We can’t sit back and assume G-d will take care of everything, but we would also be wrong not to step back and realize that our individual potential is a gift from G-d. Everything we accomplish is both due to G-d’s will and our own efforts.