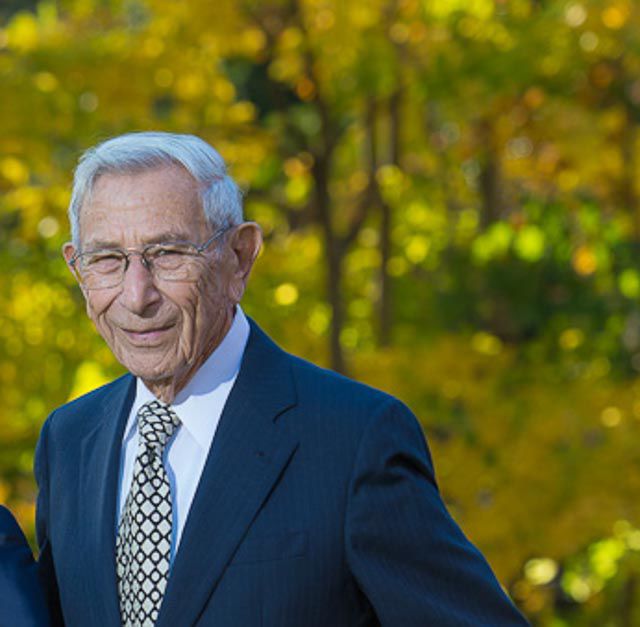 Fred was born on December 12, 1924 in St. Louis to Austrian-Hungarian émigrés Anna and Morris Handler. His parents owned a small shoe repair shop and they worked long hours to provide for their children. Education was a high priority, especially for Fred’s Mother. Before marrying and immigrating to the United States, she was admitted into a “gymnasium,” a secondary school that prepared academically minded students for higher education at a university. She ensured that her children attended college and graduate school.

Fred was a gifted student who graduated from Soldan High School and attended Harris Teachers College in St. Louis. He received his medical degree from Washington University. After completing his pathology residency at the Barnes-Jewish Hospitals, he joined the staff of Jewish Hospital’s Pathology Department. In 1951 Fred was sent to Korea where he served in a Mobile Army Surgical Hospital (MASH) and then to Tokyo where he served as a pathologist in the Central Laboratory for the Far East Command. During Fred’s military service in Asia, he developed an expertise in tropical and parasitic infections and created an extensive reference slide collection. It was also in Tokyo where Fred and Estelle developed their life-long appreciation of Asian art and began their extensive collection of cloisonné and Japanese wood block prints.

Fred and his wife, Estelle, childhood sweethearts, moved from St. Louis to Jefferson City, MO in 1956 to raise their family. There, Fred practiced pathology at St. Mary’s Hospital and Memorial Community Hospital. He established the Physician’s Laboratory which became the Central Missouri referral laboratory for clinical, surgical and forensic pathology. Fred devoted time and energy to mentoring nurses, laboratory technicians and young and aspiring physicians and he was proud that each of his children earned their spending money by working in Physician’s Laboratory.

Fred and Estelle were proud of their home overlooking the Missouri River and they filled it with the hustle and bustle of their large family, love, laughter, art and Jewish traditions. In 1984, Fred and Estelle returned to their native St. Louis, where Fred enjoyed reading voraciously, completing crossword puzzles, and taking multiple long daily walks with his ever present pipe – eyes trained down – in search of nature and treasure. He loved fishing, live theater, the St. Louis Symphony, and classical music.

Fred will be remembered as a committed husband, a devoted father, an epic storyteller and gifted teacher to all. Donations can be made to Kol Rinah Congregation, 829 N. Hanley Rd, St. Louis 63130 or the Jewish Federation of St. Louis COVID-19 Response Fund: https://www.jfedstl.org/.