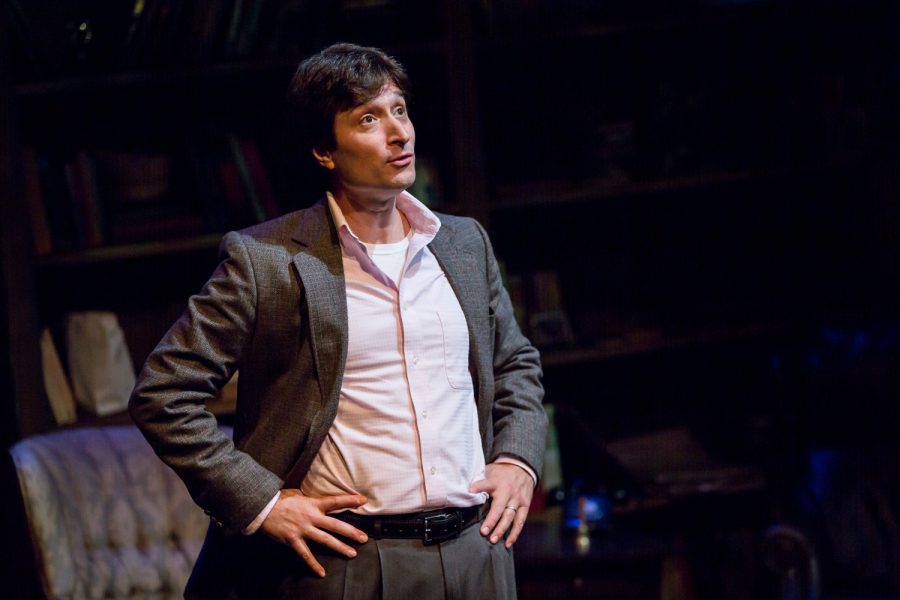 Leslie Caplan, a member of Central Reform Congregation, remembers the last text she received from her dear friend and fellow congregant, Andrew “Andy” Michael Neiman, three days before the St. Louis native and accomplished actor went missing in upstate New York last month. The text read: “No matter how circuitous the route, I’ll find a way back to Ellie.”

Ellie is Neiman’s 8-year-old daughter and was the light of his life. Caplan, who doesn’t remember a time when she didn’t know Neiman – their families have been friends for generations – says his love for his daughter was unwavering; he adored her.

Unfortunately, a body found along the shore of the Hudson River near Poughkeepsie, N.Y. last week was identified as that of the 48-year-old Neiman. He had left the nearby Mid-Hudson Regional Hospital on May 21, where he was waiting to be admitted for severe mental health issues. He had struggled with bipolar disorder since 1995.

On Friday, June 25, friends and family will celebrate Neiman’s extraordinary life at 11 a.m. at the Frontenac Hilton. The service will be available to watch on Zoom by accessing the link at www.andyneiman.com. Shiva will be held at the hotel from 3:30 to 6 p.m.

As those who knew him learned of his passing, many took to social media not only to express condolences but also to reminisce about Neiman’s remarkable and abundant talents. Members of the St. Louis theater community were particularly devastated by the loss; many described him as a profoundly gifted actor, producer, writer, teacher and musician.

St. Louis-based actor James Anthony recalled how seamlessly Neiman stepped into the role of sports columnist Mitch Albom in the New Jewish Theatre’s 2017 production of “Tuesdays with Morrie” after another actor abruptly exited the cast during the second week of rehearsals.

“Rarely do you find an actor who not only is as talented as Andy but could step in at a moment’s notice and do such a superlative job,” said Anthony. “He was a remarkable talent. He was so intelligent and approached every role with such thoroughness.

“I learned a lot about my character just by working with Andy because he asked so many questions about the play, about the characters and about the time span. It was his zest for the play that enlightened me. And the thing is, that doesn’t happen very often, that’s rare.”

Longtime colleague and friend Annamaria Pileggi directed Neiman in two plays, including “Tuesdays with Morrie” at NJT. She says she and Neiman, whom she described as a “creative soulmate,” were in close contact, with him sending her scripts he had written, and both having studied the Suzuki method of acting, another interest they shared.

“Andy was very creative and so passionate about his craft and his vocation as a storyteller. It was a sacred thing to him,” said Pileggi, who is the associate artistic director of the St. Louis Actor’s Studio and teaches theater at Washington University. “He was fierce in his passion and his responsibility toward his artistry and because of that he was indefatigable — he never rested in his creative pursuits. It was like he was on a quest creatively and there was an energy to that that was irresistible.”

Edward Coffield, artistic director of the New Jewish Theatre, directed Neiman in NJT’s 2016 production of “Yentl,” where he appeared as Avigdor, one of the lead roles.

“Andy, in so many ways, was the total consummate professional — very intense to work with, very focused, always full of ideas,” said Coffield. “I think the funniest thing that happened in ‘Yentl’ is that his character had to appear completely nude on stage. I certainly had a great deal of anxiety about it, but Andy didn’t bat an eye. He was fearless. In fact, I remember we had not talked about when to incorporate the nudity into the dress rehearsals because I wanted him to feel comfortable. One night he just came on nude when he was supposed to. And I was like, ‘Oh, OK, we can check that off.’”

Caplan, who along with several other women, including Neiman’s mother, are part of a chavurah called the Seder Sisters, remembers seeing Neiman as the title character in Stray Dog Theatre’s 2005 production of “The Elephant Man.” What impressed her most was the way he fully inhabited the part, which earned him a Kevin Kline Award nomination for best actor.

Andrew Michael Neiman was born on June 3, 1973, to Lainie Collinger, a licensed social worker and business coach, and Bennett Neiman, a now-retired psychologist, and was the eldest of their three children. The couple divorced when Andy was 15 years old.

Neiman’s uncle, Tom Collinger, remembers him as a “gorgeous little boy” who played chess at the age of 3 and starred in the title role of “Pinocchio” at age 8 in a Jewish Community Center arts camp production.

“Andy was a remarkable infant, child and then later young adult and adult — remarkable in ways that are objectively so,” said Collinger. “He was savant-like in his genius and a sort of remarkable combination of almost unexplainable talents.”

Rabbi Susan Talve says Neiman was the “very first bar mitzvah boy” at CRC in 1986, adding that she also officiated his wedding in 2012 to Louise Edwards.

“Andy was a wonderful, creative, talented human being. His influence can be felt at so many places, including CRC,” said Talve. “He came from a very talented family, and Andy was no exception. Everything the family did was beautiful and intentional and thoughtful. They just had a magic touch and Andy had a magic touch to things.”

After graduating from Clayton High School, where Neiman acted in school plays and musicals and enjoyed classes at COCA, he attended Wesleyan University and received a master’s in fine arts from the University of Connecticut. He lived in New York for a short while and Chicago for several years but eventually came back to St. Louis.

He was very close to his younger siblings, David Neiman and Emily Asher Abramson, both of whom now live in New York. When Andy went missing, they mobilized hundreds of people to search not only in upstate New York, but throughout the country as word spread of his disappearance. Even Bravo TV’s Andy Cohen, who had graduated from Clayton several years earlier than Neiman and attended the same Wisconsin summer camp, made an appeal on Facebook to help find the missing man.

David Neiman said his brother played a pivotal role in his life.

“My older brother Andy was the most important figure in shaping who I am today,” he said. “Since I was born, I thought he was a superhero. And I really just wanted to be his sidekick.”

Abramson also was enamored of her brother and his enormous gifts, but like David, knew Andy had been spiraling downward for the last year and was truly in agony.

“While I could talk for hours, extolling my brother’s prodigious talent, I don’t want to gloss over the pervasive torment that accompanied his artist’s soul,” she said. “He knew almost nothing of pragmatism and was guided almost exclusively by his visceral sense of things.

“The bond I felt with him was, is, totally singular and that is what is going to sting for a long time. He and I would often refer to our love as symbiotic because it was such a depth of mutual affection with almost no conflict.”

Andy Neiman had so many abilities, the spectrum of which is on view on his YouTube channel, which features him strumming a guitar performing songs he wrote as well as singing popular tunes from “The Music Man” and adorable videos of daughter Ellie as a baby.

As a serious student of Shakespeare, Neiman relished performing in his plays. Before the megahit “Hamilton” was on anyone’s radar, he wrote a rap version of a Shakespearian work to help teach youngsters about the Bard.

He was a supreme pie baker who gathered dozens of friends at Forest Park for pie picnics around his June birthday. And he also was the ultimate mixer of cocktails.

Actor James Anthony says while he never got to sample one of Neiman’s legendary pies, “his augmented Manhattans” were absolute perfection.

“He once had me on the floor laughing, like rolling over in stitches,” said Anthony. “We were talking about movies and discussing Woody Allen movies. He did an incredible impression of Woody Allen. He went into this monologue from I believe was ‘Annie Hall’ or ‘Manhattan.’ His voice, intonation, everything — he sounded just like Woody Allen. I couldn’t stop laughing.

“Every time I socialized with him at his house, he always had reading time with his daughter. He’d say, ‘I’m sorry guys, I cannot mix any more drinks right now. I am going to read Ellie a story.’ They were very fond of each other.”

Added NJT’s Coffield: “The one thing that was so evident to everybody who knew Andy was his absolute smittenness — is that a word? — with his daughter.”

Donations in Neiman’s memory can be made to a GoFundMe account set up at https://www.gofundme.com/f/raise-money-to-help-find-andy-neiman-missing. The money will be used to help support Andy’s daughter and to cover funeral costs.