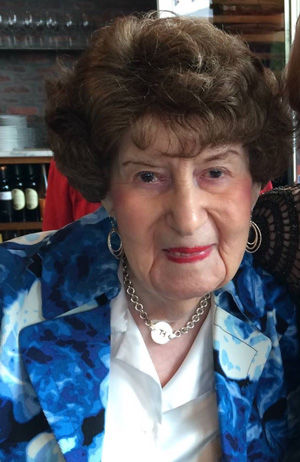 Charlotte was born in Kansas City, Missouri, May 2, 1916, the daughter of Ben and Mary (Woskow) Zenitsky. She remained a lifelong Kansas City resident, attending its schools and graduating Central High School. She attended Kansas City Junior College for a short period of time and then married her high school sweetheart, Sol Nadlman. Their first daughter Marcia was born and then Sol was drafted into World War II.. Charlotte held up the home front while working at Pratt Whitney. Upon Sol’s return they continued their family with the birth of Sandy.

Charlotte loved to bake for her family and was known for her signature brownies and chocolate chip cookies. She was an active member and volunteer of the Macella Roden Club and a volunteer coordinator at The Temple, Congregation B’nai Jehudah. Later in life Charlotte went to work for the U.S. government, retiring after her long career to take care of her husband Sol when he became ill.

Charlotte was preceded in death by her parents; her loving husband of 50-years: Sol; sister: Harriet Simon; brother: Joe Zenitsky.

Condolences may be shared at www.louismemorialchapel.com. (Arr. The Louis Memorial Chapel, 816-361-5211.)