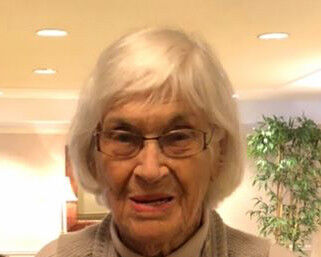 Beverly Sue Werner Abrams lived a full and active life.  She was a devoted mother, mother-in-law, grandma, great grandma, aunt, cousin and friend to all.  She knew no stranger.  She saw only good in everybody.  At 97, after a brief illness, Bev passed away on May 28, 2020 at Evelyn’s House in Creve Coeur.

She married Donald Abrams in the middle of World War II in 1943, taking the train with her parents to Seattle to meet gunnery officer Abrams when the destroyer USS Wells came back for repairs. They both graduated from Clayton High School and Washington University.

After Don’s passing in 2008, Bevie moved to The Gatesworth where she became the center of a maj and bridge playing social hub. She was in charge of making sure there were enough people for a game, but more importantly that everyone was o.k.

Bev’s 3 children, 8 grandchildren and 8 great grandchildren loved to hang out with her at the Gatesworth.  She would insist on going to Bricktop’s where she would order her stuffed artichokes.  She also liked to take the kids to Rich & Charlie’s as well as Ted Drewes.   She kept close to family and friends via a “TGIT” (T for Thursday) email of her goings on each week.

As a substitute teacher known lovingly as “Mrs. A”, Bev taught for 47 years between 1955 and 2002 at the Clayton, Ladue and University City School Districts.

One cousin remembers that Bev was on a mission to teach each grade school girl how to throw a softball properly by stepping forward and planting first the foot opposite the throwing hand.  She realized that the regular PE teachers back in the 50’s and 60’s just did not see ball throwing as an important skill for girls to learn.

At age 80, she chose to stop substituting, but continued to mentor students. In her later years, when she shopped at Schnucks, she would approach young adults asking “do I know you?  Inevitably, they would shout “Mrs. A, we love you!”

Even near death, this recognition continued as the hospice nurse saw Bev, came to her bed, held her hand gently and whispered, “I know you. You were my substitute at Meramec.”

On the Werner side, Beverly was predeceased by her father Julius Werner and her mother, Jennie Palan Werner, and by her uncles Harry Palan, Robert Palan, aunt Blanche Palan Hilton and survived by her first cousin Alvin Werner and all surviving Werner, Palan and Hilton relatives.

On the Abrams side, Beverly was predeceased by her brothers-in-law and sisters-in law Joseph Abrams and Harriet Abrams Karney, Edwin and Marjory Abrams, Claude and Joan Abrams, Morris Landau and Jean Landau Rothman.

Due to the Covid pandemic, services and burial were zoom-only at United Hebrew Cemetery.  In lieu of flowers, tribute contributions may be made in Beverly’s memory to the The Scholarship Foundation of St. Louis, 6825 Clayton Avenue, Suite 100, St. Louis MO 63139; phone: 314-725-7990.