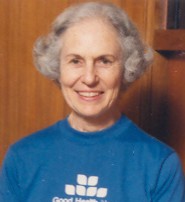 Ann Husch, died February 9, 2011 at the age of 90. Loving widow of Peter H. Husch; mother of Joan Mass, Peggy Rothschild, Sally Dean, the late David and the late Tony; mother-in-law of Bill Dean; grandmother of thirteen and great-grandmother of nine; sister of the late Peggy Hellman and the late Louise Goldberg. Other loving family members include her nieces and nephews and their children. The family is immeasurably grateful to her loving caretaker, Gina Orlando. She lived in St. Louis all her life and was well known and beloved by many in the community. Ann had an infamous zest for life. She loved music and nature. She taught Yoga. She was always a bit ahead of her time, being ingenuously “green” when it was still just a color. She rode her bike, recycled newspapers, and reused everything imaginable. She was known for her frequent letters, always including cut out hearts. A Heart symbolizes Ann! A memorial service will be held on Monday, February 21st,11:00 a.m. at Central Reform Congregation, 5020 Waterman Ave. at Kingshighway. Visitation at 10:00 a.m. Contributions to the St. Louis Symphony, Attn: Tribute Gifts, 718 North Grand Blvd., St. Louis, Mo. 63103, Missouri Botanical Garden, Attn: Tribute and Memorial Gifts, 4344 Shaw Blvd., St. Louis, Mo. 63110, or to Central Reform Congregation, 5020 Waterman Ave., St. Louis, Mo. 63108. Visit bergermemorialchapel.com for more information. Berger Memorial