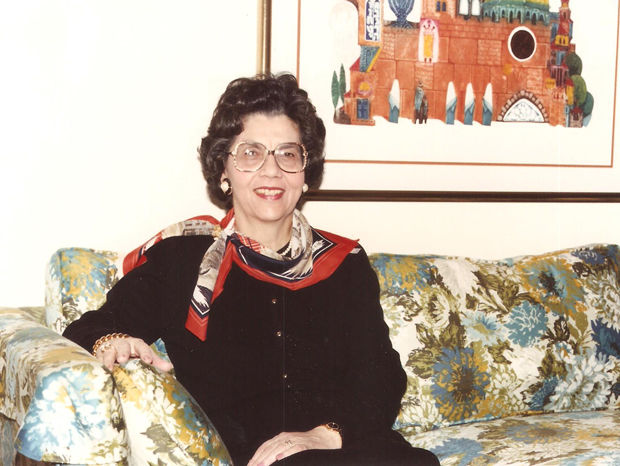 Adell was a devoted wife to her late husband, Erwin, since their marriage in 1949, and is lovingly remembered by her daughter Darien (Stephen) Arnstein in St. Louis and her two grandsons, Jonathan and Benjamin Arnstein in New York City.  Three of Adell’s siblings predeceased her, and she is survived by her brother Byron Hardin in Los Angeles and sister Beryl Silberg of Leawood, Kansas.  Adell and Erwin moved to St. Louis in 2007 to be closer to family, but they maintained their connection to their Oklahoma City roots.

Adell spent most of her adult life as a volunteer in various capacities, after working in social work in New Haven, Connecticut, and with the Sunbeam Home and Family Service in Oklahoma City.  She also taught sociology at Oklahoma City University.  She was President of Emanuel Synagogue Sisterhood from 1964-66.  In 1965 she organized the Panel of American Women, an inter-racial, interreligious group of women.  For ten years the group presented discussion programs about prejudice for various church, school and civic groups.  In 1977, she and four other women organized New Horizons, a group for Jewish seniors.  Adell was a valued resource for Oklahoma City Jewish community history, a Life member of Hadassah and a lifelong Zionist.  She had a vibrant personality and enjoyed being with friends and family.

Services will be held at Emanuel Synagogue on Monday, November 7th.  There will be home visitation in St. Louis later in the week.  Contributions are requested to the Emanuel Synagogue Endowment Fund, 900 N.W. 47th Street, Oklahoma City, OK 73118 in Adell’s memory, or to National Council of Jewish Women – St. Louis, Kol Rinah, or the Saul Mirowitz Jewish Community School.