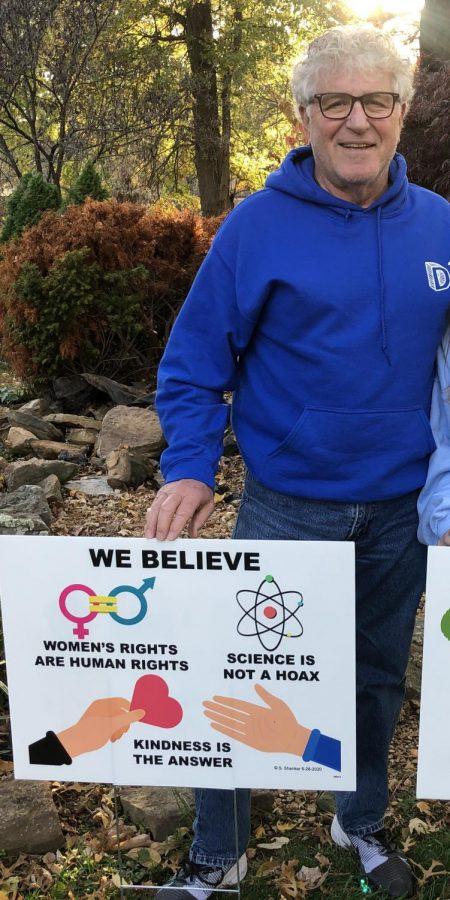 Stan Shanker shows off the sign he helped create as a fundraiser for Shaare Emeth’s Tzedek Committee.

I got to know Stan Shanker when he became one of the Jewish Light’s Unsung Heroes in 2017. He was chosen for this honor because of his outstanding work as a home visitor, welcoming new Americans here through the International Institute of St. Louis.

The thing I have found in the more than 10 years that the Light has been honoring its Unsung Heroes is that the overwhelming majority -— and we’re talking more than 100 individuals and groups — are involved in a multitude of worthy causes and organizations. So it really didn’t come as much of a surprise when I heard that Stan had created a nonprofit called “We Believe, Inc.” in an effort to spread kindness, hope and positivity and at the same time, raise money for Congregation Shaare Emeth’s Tzedek Committee, which supports social justice issues. Stan is a member of Shaare Emeth.

“With all the vitriolic language that was permeating our airways, I decided in some small way to try and neutralize the narrative and allow like-minded people to spread the word,” Stan explained.

With the help of one of his grandchildren, the two created a yard sign, which they planned to sell for a minimum donation of $18.

“We solicited the input of several creative individuals to help us with some meaningful short statements,” Stan said. “The group came up with over 15 possible phrases. After a rather intense vetting process, we narrowed the statements to the six that appear on both sides of the sign. Once we had our statements, we ‘drew’ our idea of a picture that depicted the statement. From this rough drawing a graphic designer created a copyrighted sign.”

The two began selling the signs by sending emails to friends and posting their availability in Shaare Emeth’s weekly Tzedek email. As a result of their collective efforts, they placed 233 signs and raised $4,950 for the Tzedek Committee. Should you want to support this effort and get a sign, you can email Stan at [email protected]