Zach Banner wants to team up to fight hate. He’s also looking forward to lots of Shabbat dinners (after COVID-19). 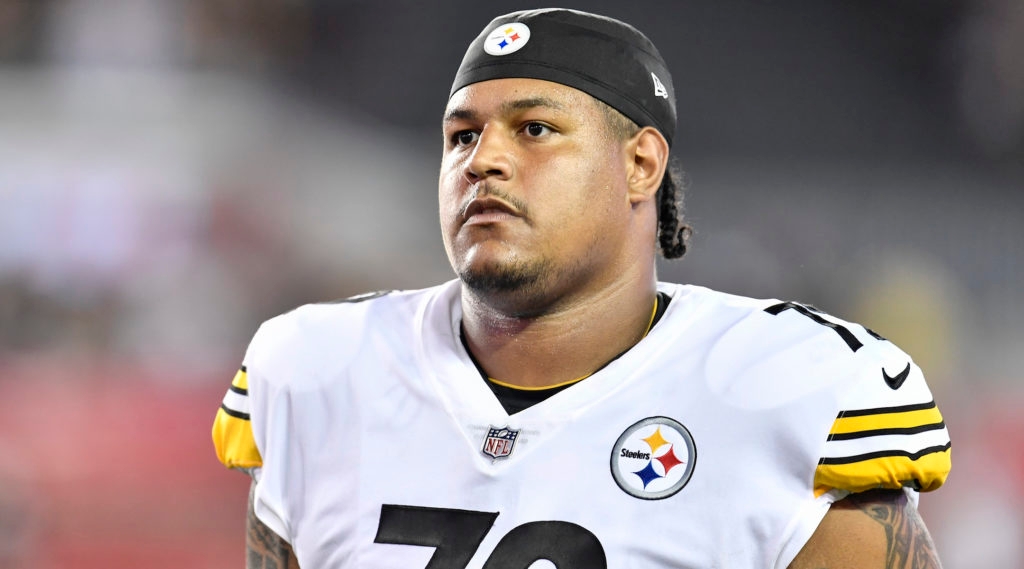 In a series of tweets and videos, which he said he hoped would help educate others who might have misconceptions about Jews, the Steeler spoke out against anti-Semitism.

“We need to understand that Jewish people deal with the same amount of hate and similar hardships and hard times,” Banner said. “I want to preach to the Black and brown community that we need to uplift them and put our arms around them just as much when we talk about Black Lives Matter and talk about elevating ourselves.

“We can’t do that while stepping on the backs of other people to elevate ourselves.”

Jackson has since apologized for posting the anti-Semitic comments and has accepted an invitation to visit Auschwitz together with Holocaust survivor Edward Mosberg, 94, from New Jersey.

Banner spoke with the Pittsburgh Jewish Chronicle by phone this week to talk about his decision to stand up for the Jewish community.

This interview has been edited for length and clarity.

PJC: What motivated you to speak out against anti-Semitism on social media?

Not only do I have friends who are Jewish that I met through my experiences at USC and growing up, but also, it’s still deep down inside my heart, the tragic situation that happened two years ago at the Tree of Life synagogue. There is still a bad taste in my mouth about it and it brings a lot of emotion, especially when someone says something anti-Semitic. You feel like you have to respond.

What did you hope to accomplish?

When you were talking about the Tree of Life massacre on video, you got visibly choked up. You were in Pittsburgh when the attack happened. How did it affect you?

Any hate crime toward anyone, but especially a minority group like the Jewish community, it just hurts. I felt the pain. A man came into the synagogue and open fire because of their beliefs and because of their background. I know how that feels in terms of pain in my heart – and especially when you talk about recent tragedies like George Floyd and Breonna Taylor, it’s somewhat relative – but once again I just want the Jewish community to know I have their back. I never want to selfishly say, “I know what you feel like,” but I do want to put my arm around the community.

After you posted your messages, did you receive any backlash or criticism from anyone?

Yeah, I received criticism. The one that really hurts me is I had some criticism from my own, wondering if maybe I am missing the point of the Black Lives Matter movement, if I am muting that or if I am stepping aside from that to take care of this problem. And it shouldn’t be that. It shouldn’t be a “them” problem, it’s an “us” problem because we were the ones that dragged them in. It was a Black man that said that, and that’s extremely powerful. And it was one of my colleagues. I need to be able to hold him responsible, and anybody else that is in my position.

You mentioned in your video that even you, growing up before you met Jewish people at USC, had heard certain rumors about Jewish people. What sorts of things did you hear?

I didn’t know so much about the in-depth stuff. So growing up it was very, very common amongst the Black community to just get white Jewish people mixed up with other European background races, and to just say, “Oh that’s another white guy.” We really need to have a deep understanding of the history of the Jewish community, and the Holocaust, and sympathize with that. And not only that. It’s not like that was the last bad thing that has happened. There is a lot of stuff between that and the Tree of Life massacre. We need to educate ourselves on that because if we are able to do that we won’t say things like that.

Let’s talk about some of the positive reactions you got from your postings. I read you were invited to some Shabbat dinners. Who invited you?

(Laughing) Everybody. I mean millions of people. I really mean that. From all over the world. I’ve gotten invited to Israel, to New York, to up the street in Pittsburgh and the Pittsburgh area. It feels amazing to be embraced. I have I don’t know how many incoming loaves of challah bread. People have offered their brisket. And people have even offered their daughters as well – it’s insane. That is the truth. I’ve been tweeted at, people saying, “I would not mind you marrying my daughter.” I was like, “Wow.” It’s hilarious.

I’m assuming you are not taking up any of those offers. But are you going anywhere for Shabbos dinner?

Not yet, just cause of quarantine. But after COVID-19, yes.

You also mentioned you got a lot of donations from the Jewish community to your foundation, the B3 Foundation, which works to empower children.

Over $60,000 in increments of $18. I’m not joking. A few were a couple hundred bucks here and there. I’m just grateful. It’s the amount of people. And don’t cross off the Jewish women, either. I’m going to take up some of those offers for dates.

Are you OK if I print that?

[Laughing] Toby, I am single. Absolutely.

What else do you want to tell the Jewish community of Pittsburgh?

Let’s go Steelers! I’m happy you guys see my heart, not only toward you, but toward everybody. And I am more than happy to not only sit down and further this discussion in a certain way with my organization but to also ask for the City of Pittsburgh, the Jewish community to be exact, to use this moment – what was once pain but hopefully now happiness because I spoke up – to please continue to support me and the players on our team that are really trying to make a push with this Black Lives Matter movement. We are meeting as team, talking about certain legislation issues and things with the police and working it out. Talking about the future of stopping so much crime and so much hate against my community as well. So let’s just team up together and love each other.