WEIMAR, Germany (JTA) — What if the Yiddish-speaking poets and songwriters had electric guitars and amps in the shtetl?

That’s the question Sasha Lurje and her Forshpil bandmates asked themselves a decade ago in Latvia when they began their shift from traditional klezmer music to psychedelic rock.

“When people see a Jewish or Yiddish band, they expect an accordion,” she said during a recent sit down in the city of Weimar, Germany. “I love accordions, but this is not what this band is.”

The band’s second album, “forshpil:tsvey,” was six years in the making and released on Aug. 7 with a socially distanced release concert scheduled for Sunday at the annual Yiddish Summer Weimar festival. Over those years, the band recorded tracks across the globe –– in Berlin, Riga, New York and St. Petersburg, Russia, among others.

The record departs from the horns and accordions of klezmer from the start. It kicks off with a thrum of thickly distorted guitar before sliding into hard rock interpretations of Yiddish songs, most of them written in the second half of the 19th century and collected in the 20th, some well-known among Yiddishists. The album stays pretty upbeat throughout, with amplified violin, classic rock-style organ, loud drumming and psychedelic guitar effects.

She also noted that a consistent theme across the album is “dark love stories,” something the non-Yiddish speaker can easily pick up on during a listen or by reading the English translation in the album’s accompanying booklet.

Forshpil literally means “prelude” in Yiddish, but Lurje explained that it’s also a term for a style of Yiddish music that’s full of individual interpretation and melodic freedom.

“We’ve been developing it slowly, partly because we live far from each other, partly because it’s not necessarily a project that we feel like is ever done,” she said. “It’s an exploration of sound. It’s an exploration of what it means to play this music or these songs in this way. There are more questions than answers, and we’re just trying to connect to things that we develop in our everyday life of exploring Yiddish music.” 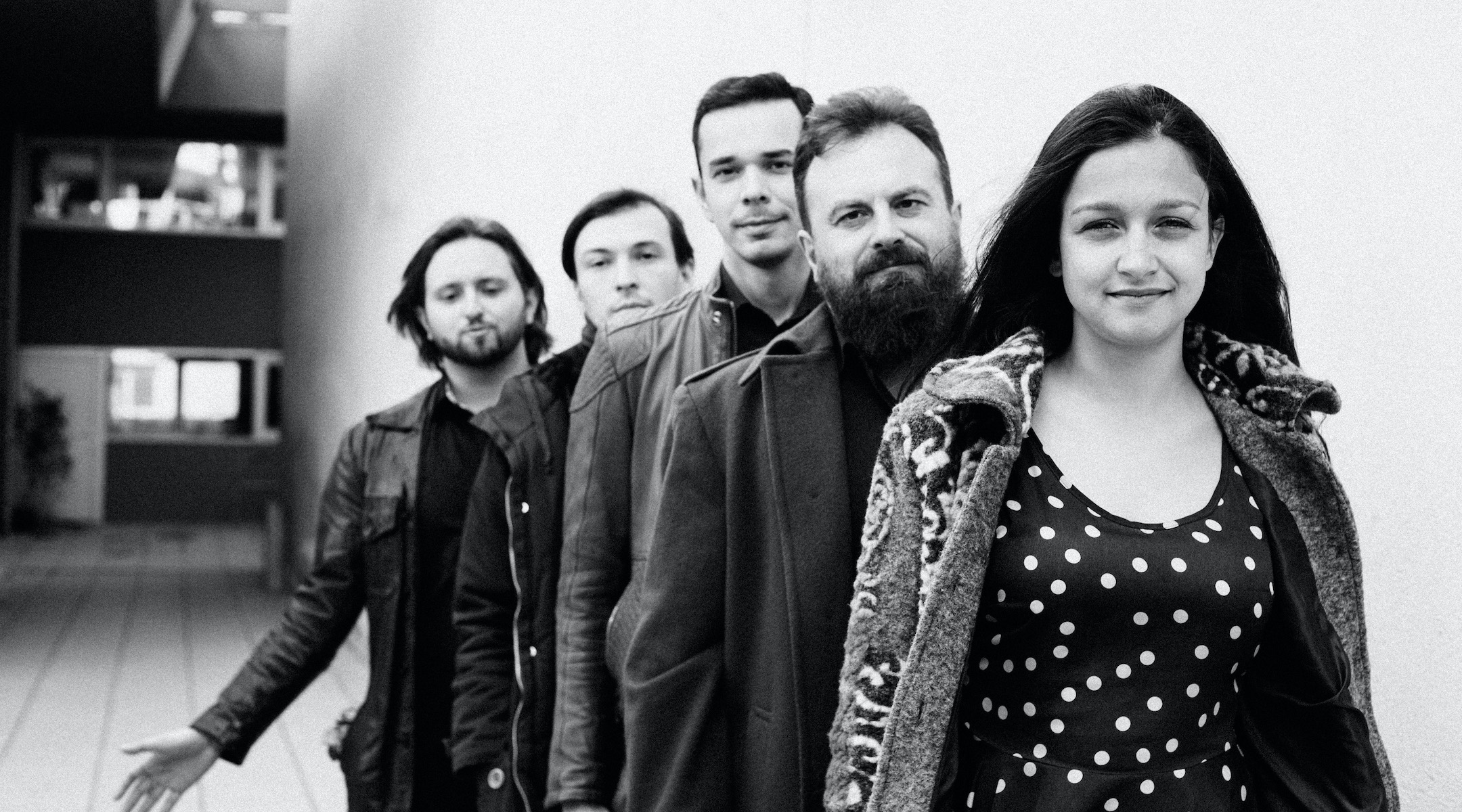 Lurje, 35, spent the first five or so years of her life living in Soviet-occupied Latvia. She remembers waiting in long lines and thinking nothing of it — for her, it was just a time when she hung out with her friends. Only later did she realize the impact the Soviet Union had on her country.

Music became her focus early in life. As a teenager, Lurje sang in a choir with a focus on church music.

“I was the second soprano, and the first soprano was this other Jewish girl who’s one of the biggest jazz singers in Latvia right now,” Lurje said. “Her mother saw my name, and she was like, ‘She’s a Jewish girl. You gotta be friends.’”

The two joined the local Jewish theater and began performing songs in Yiddish and Hebrew for the Jewish community. At the time, there were various “strong movements” supporting Israel, but Lurje found herself unable to connect with the Hebrew music.

“There was nothing wrong with them,” she said. “I just didn’t relate to them the same way, but I really liked the Yiddish ones.”

From then on, Lurje’s life has been inextricably linked to Yiddish music, attending and performing at various Yiddish events around the world. She is a member of other Jewish groups, including the Semer Ensemble and Goyfriend, a collaboration with the Brooklyn klezmer band Litvakus. She also co-founded, along with her bandmate Ilya Shneyveys, the artist-run Shtetl Neukolln, a festival that celebrates “the development of Yiddish culture in Berlin.”

Lurje resists the idea that she’s bringing Yiddish “back” from the dead, or reviving the language in any way. This is a consistent frustration among klezmer and Yiddish-speaking musicians: Once every few years, they’ll say, stories will come out proclaiming that Yiddish “isn’t dead yet.” It’s an insulting suggestion in the eyes of Lurje and her fellow musicians.

“This culture was never forgotten,” she said. “It was never dead.”

Lurje joined Forshpil, which was founded in Riga by violinist Inna Raikhman in 2003. Once Raikhman departed the group a decade ago, Lurje and Shneyveys pushed the group in a new direction.

When they set out to create the new record, they didn’t go into it thinking they’d create a new style. The focus was always on imagining Yiddishkeit with a different history.

“We created new history,” she said. “What if people in shtetls actually got electronic instruments?”

It’s a question Lurje ponders given the reality of 21st-century Ashkenazi culture and how history has irrevocably influenced its development.

“The history of Ashkenazi Jewish culture, of Yiddish culture, has been interrupted in many ways, especially in the secular world by assimilation, by pogroms, from the czar’s army, by the Nazis in the Second World War,” she explained. “The State of Israel was also not interested in Yiddish culture.”

In Lurje’s eyes, Yiddish culture didn’t have an opportunity to enter mainstream culture in the second half of the 20th century. Forshpil’s experiment with psychedelic Yiddish imagines what timeless lyrics, like the heartache behind “Oy Dortn Dortn,” would sound like had history allowed them to evolve naturally alongside the introduction of pop music and rock ‘n’ roll.

“How would the people that we hear on these field recordings sound if there were a drum kit and electric guitar behind them?” she said.

Despite the ongoing pandemic, she’s been fortunate to find opportunities to continue to perform. Most recently, she’s been singing and teaching workshops at the monthlong Yiddish Summer Weimar festival.

She recalled a vulnerable feeling she experienced during a performance at the festival. She was singing on stage in Weimar’s central marketplace flanked by Hotel Elephant, where Hitler enjoyed staying while visiting Weimar. The balcony where he gave speeches still juts out from the facade of the hotel.