Yair Lapid once allied with Benny Gantz. Now he wants to keep him from becoming prime minister. 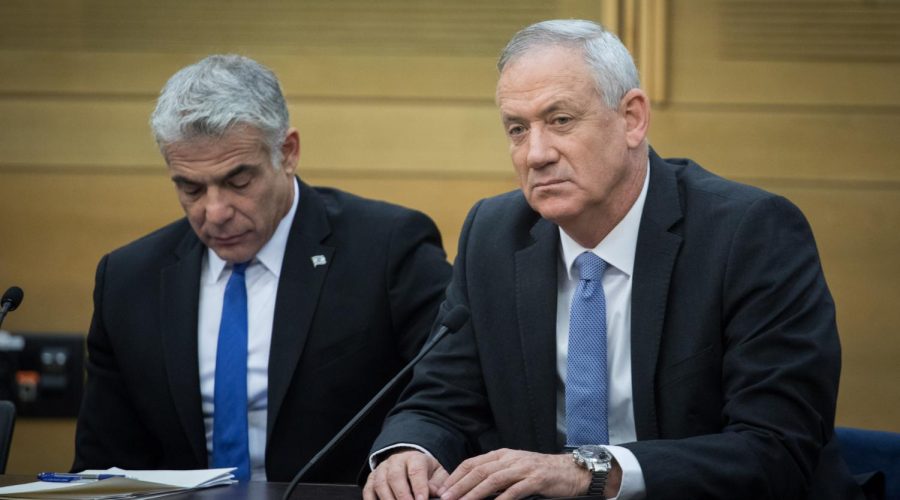 Blue and White party chairmen Benny Gantz and Yair Lapid during a faction meeting at the Knesset in Jerusalem, Nov. 18, 2019. (Hadas Parush/Flash90)

Lapid told a meeting of a special Knesset committee formed to write legislation needed for Prime Minister Benjamin Netanyahu and Gantz to form an emergency unity government that he would vote to cancel the rotation agreement whenever Netanyahu is ready.

In a 10-6 vote Monday, the committee advanced the bill that enshrines in law the rotation of prime minister. The passage, following a combative session, moves the measure to the full Knesset for a vote Thursday.

With the vote of his faction, Lapid at any time could help annul the law that safeguards the Netanyahu-Gantz power-sharing deal and bring down the government, leading to new elections.

Lapid, who heads the Yesh Atid-Telem parties, broke with Gantz and his Blue and White Union after Gantz announced that he would join Netanyahu in an emergency national unity government. He is slated to serve as opposition leader in the new Knesset.

Under the rotation, Netanyahu would remain as prime minister for 18 months and then Gantz would take over.

“Any time Bibi wants to stop the rotation, all he has to do is come to me and say that he wants to return the laws to how they were before, and I will say yes,” Lapid said. “We respect our democracy, and these horrible and shameful bills must be canceled.”

Gantz required the change from one of Israel’s quasi-constitutional Basic Laws because of speculation that Netanyahu would not honor the coalition agreement and give up the premiership. The change also will prevent Netanyahu from being barred from serving as prime minister as his corruption trial goes forward.

Blue and White responded to Lapid’s statement by saying that if he prevents Gantz from becoming prime minister, then Lapid’s party will not cross the needed threshold in the resultant election to join the government.